Red Wings defense loses Cholowski but gets Kronwall back

Red Wings defense loses Cholowski but gets Kronwall back 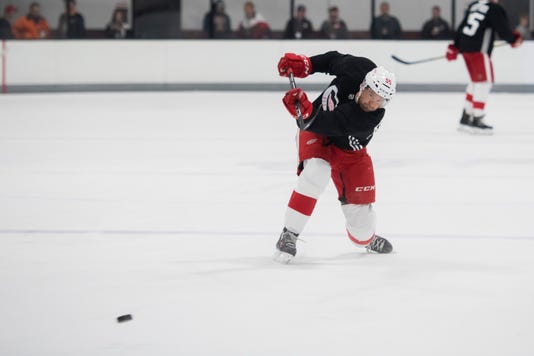 But they also get one defenseman back in time for Thursday’s game against Toronto.

The team announced Wednesday that Dennis Cholowski is day-to-day with an upper-body injury suffered in Monday’s game in Anaheim. Coach Jeff Blashill said Cholowski is likely to miss Saturday’s game in Boston, in addition to Thursday's game.

Of the four young defensemen playing regularly on the Wings’ defense recently, Cholowski, 20, has been the most impressive, tying for the team lead with three points (one goal, two assists) in three games, with a minus-2 rating while averaging 22 minutes, 10 seconds of ice time.

But the Wings also said Niklas Kronwall will make his season debut against the Leafs.

Kronwall, 37, has been battling a lower-body injury since the end of the preseason. But after several days of “feeling good,” Kronwall is ready to go.

“It came kind of nowhere,” said Kronwall of the injury. “It’s a little frustrating at the time but you try to find a way through it and get back to work. It feels good, and I hope to be back in again.

“You try to make the best of it but it’s good to be back skating with the guys again. I’m at the coach’s disposal. Obviously we have a lot of injuries.”

No question about that.

Blashill said Daley, Ericsson and Green are all out for Thursday, and in all likelihood, Saturday in Boston.

The one benefit, said Kronwall, of having so many injuries is the fact the young defensemen (Cholowski, Joe Hicketts, Filip Hronek, Libor Sulak) have had an opportunity to show what they can do at the NHL level.

“It really is crazy,” said Kronwall of all the injuries. “But in saying that we’ve been able to see the younger guys even more and they’ve done a tremendous job. It’s encouraging to see, not just in the short term but in the long-term, what you have in the organization.

“It's been extremely encouraging to see.”

Maybe the most frustrated Wings player on the completed two-game southern California trip was Andreas Athanasiou.

Snakebit on various scoring chances – including missing on two breakaways, fumbling one puck into the corner – Athanasiou is confident his luck will change.

“The chances are there and eventually they’ll go in,” Athanasiou said. “I’ve had a lot of breakaways before, and sometimes those things happen. It’s not going to be my last breakaway. It’s not a good feeling when you don’t get a shot off on a breakaway, but I know the next one I’ll be ready for and hopefully it’ll go in.”

The start time for Saturday’s game in Boston has changed from 7 p.m. to 3 p.m. so it will not conflict with the Red Sox, who are hosting the Houston Astros at Fenway Park in Boston at 8 p.m. in the ALCS.

… During Wednesday's practice, Blashill and his assistants were on the Wings players to shoot quickly after receiving passes. Blashill thought there were too many shots not taken quickly enough during the trip, giving opposing goalies time to react.

“Shooting off the pass, it’s just the mentality of getting the puck on and off your stick as fast as you can,” Blashill said. “It’s a definitely a habit where we’ll have to keep pounding over time and we’ll stick with it and become better scorers because of it.”

Outlook: The Leafs (3-1-0, 6 points) have been as offensively dangerous as many felt they’d be after signing C John Tavares (six goals) in the summer. … C Auston Matthews (seven goals, three assists) has been red-hot, and the Leafs' power play is currently at an NHL-high 50 percent.