'We just have to have pride': Red Wings' lose ugly in Montreal

The Red Wings are looking for their first victory and they’re not going to get it playing like this.

'We just have to have pride': Red Wings' lose ugly in Montreal 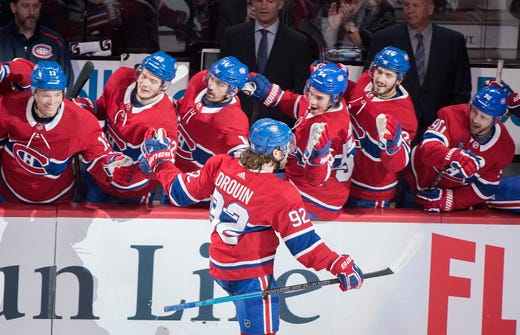 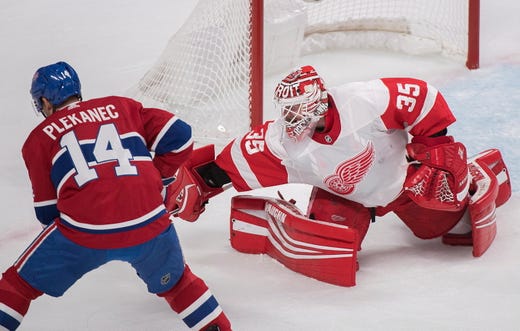 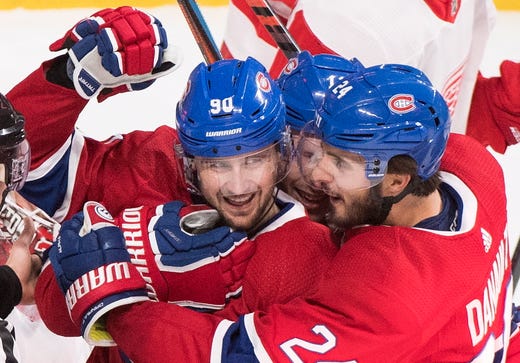 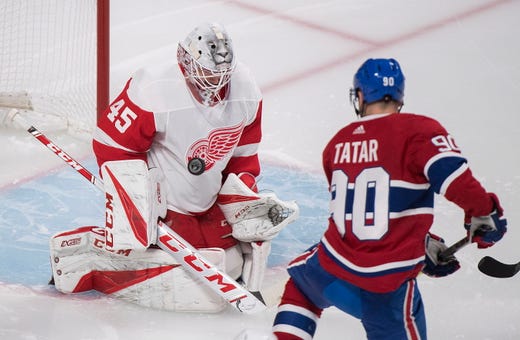 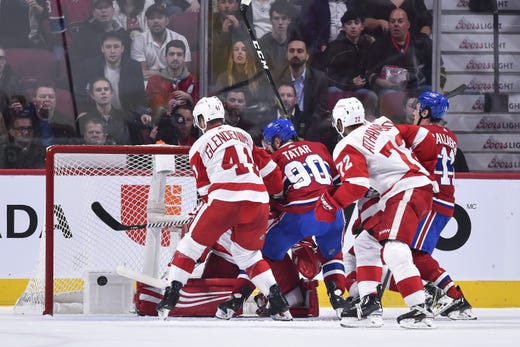 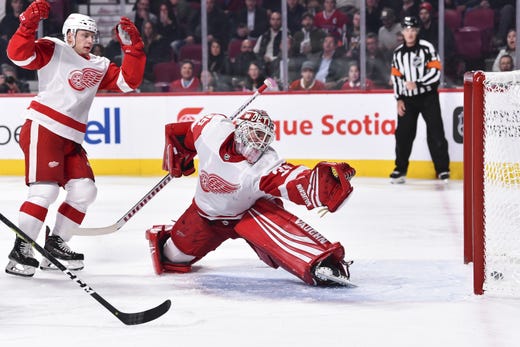 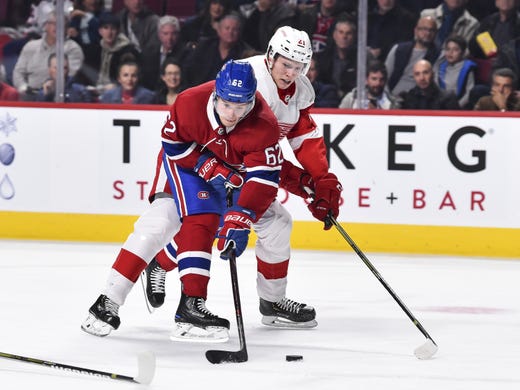 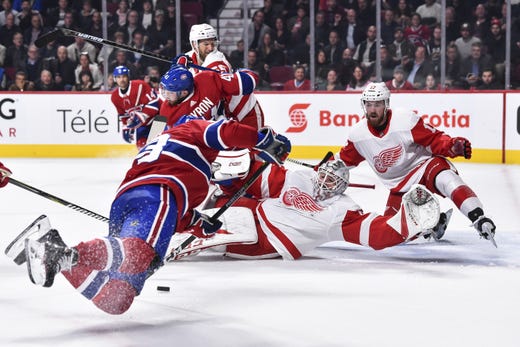 Matthew Peca #63 of the Montreal Canadiens falls as he tries to take a shot while goaltender Jonathan Bernier #45 of the Detroit Red Wings spreads himself wide along the ice. Minas Panagiotakis, Getty Images
Fullscreen 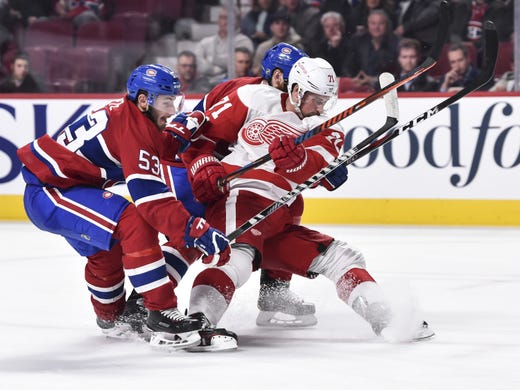 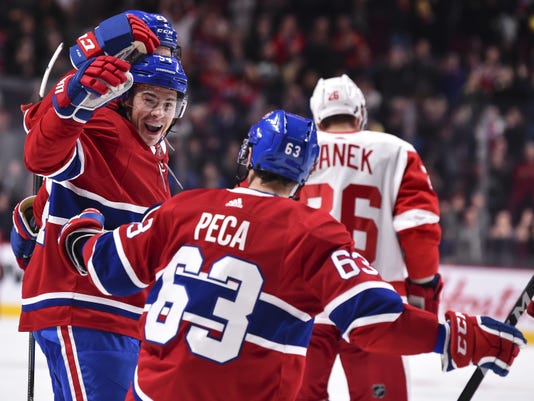 Montreal — As bad as Saturday’s loss in Boston was, this was — incredibly — just as bad.

The Red Wings are looking for their first victory and they’re not going to get it playing like this.

Monday, it was an ugly 7-3 loss in Montreal, as the Red Wings fell to six consecutive winless games (0-4-2).

If you thought Saturday’s 8-2 loss in Boston was difficult to stomach, all you had to was wait another 48 hours.

There were few more positives Monday. The Wings did outplay Montreal for the beginning of the first period and most of the third when the game was out of reach.

But the rest of it, the Wings played ghastly hockey.

“We just have to have some pride,” forward Gustav Nyquist said. “This is not what we want, travel around and lose with these numbers. It’s embarrassing.”

When the Canadiens (3-1-1) began rolling, the Wings had no answer. Bad defense began getting worse, players were trying to do too much, and Montreal scored easy goals.

“We have to show some pride, enough is enough,” defenseman Niklas Kronwall said. “We have to go to work. We don’t even give ourselves a chance right now. We’re hanging our goalies out to dry.

“We’re not working hard enough to create our own chances.”

Suddenly, it might be time to think about this.

The way the Wings are playing, that’s doable.

The Wings began Monday’s game well, pressured Montreal, controlled the puck and did most of the things coach Jeff Blashill has been preaching.

Then, Filip Hronek slashed Jonathan Drouin to prevent a scoring opportunity, Drouin was awarded a penalty shot and scored at 7 minutes, 13 seconds of the first period, and the rout slowly was on.

“We stayed with it,” Blashill said. “(Then we) gave away easy goals, and what’s happening is, you’re trying to score and you end up not doing it the right way and it ends up in your net. The second period was a similar deal to Boston where we just came up hoping and cheating for offense instead of doing it the right way.”

The Wings’ aren’t scoring many goals, but it’s with the defensive end that Blashill isn’t happy.

“We’ve talked so much about offense at the beginning of the year, but we have to figure out how to defend better,” Blashill said. “We have to make sure we do a better job of making people go through us to get to the net.

“We have a tendency when things go the wrong way, we stop playing the right way and start hoping for offense. We have to stop it now.”

Other than that, just a poor night.

Here are some other observations:

•For all the optimism early on about the young Wings’ defense, the rest of the league is catching up to them. But also, the losing might be having an effect, with everyone attempting to do more at the first signs of trouble.

The defensemen aren’t getting much help from their teammates up front.

“In Boston we made it hard on the (defense), tonight our defense made some tough reads,” Blashill said. “We’re going to have to get that fixed. All you can do is go to work and try to get better at it.”

Opposing teams are getting easy scoring chances. There’s nothing Howard or Bernier can do.

“We don’t even give ourselves a chance,” Kronwall said. “We’re hanging our goalies to dry, back door tap-ins left and right. It’s tough to win hockey games like that.”

Ouellet is from here, so you can imagine the excitement for a kid from Montreal to put on the Canadiens sweater.

After a meteoric start to his pro career — remember he jumped right into the playoffs in 2014 — Ouellet slowly fell out of favor and was clearly passed by Nick Jensen on the depth chart — and had no chance with all the young defensemen coming into the NHL.

By all indications, Ouellet has played well in the early going and looked good Monday against his former team.

Tatar, for whom the Wings amazingly got a 1st-, 2nd-, and 3rd round pick from Vegas at the trade deadline last spring, never adjusted to the Golden Knights — whose coaching staff never warmed to Tatar, either, making him a frequent healthy scratch during the playoffs.

Tatar was part of the package that Vegas sent to Montreal for Max Pacioretty (Michigan) before this season and now has three goals and four assists in five games.