The retired captain's ability to restore order to games at critical moments is missed by Red Wings, and could come in handy against the Lightning. 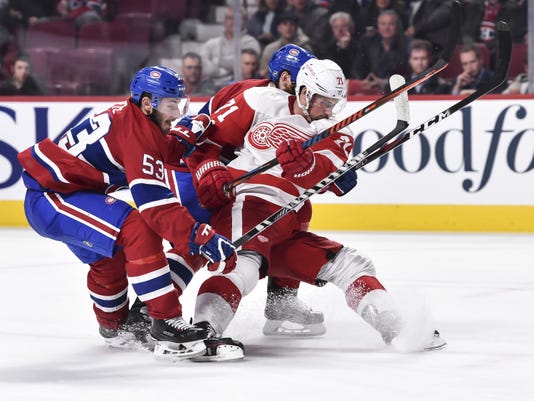 Detroit — An integral ingredient, now missing, would help support the Red Wings against surging opponents intent on thrashing them.

It is something Henrik Zetterberg provided. It is just one reason he achieved stardom, served as a role mode and received respect all around the NHL.

The Wings could have used it in the 8-2 loss to the Bruins and the 7-3 loss to the Canadiens.

When an onslaught began, and the Wings fell behind, invariably, Zetterberg performed a couple rock steady shifts. During them, his attention to the grimy details of the game, all along the ice, stiffened the spine of a put-upon team.

Reliably, however, it settled things down, just enough.

More: Analysis: Wings need changes, but firing Jeff Blashill isn't one of them (yet)

More: Red Wings' Svechnikov out for season after surgery

A beleaguered team caught its breath. And then, often enough, things began to turn.

Not exactly a sexy performance, a couple of steady shifts. But useful, and just part of the low-key genius that made Zetterberg a sometimes-underappreciated star.

That is the mental side.

The other side, he said, “is the maturity of our game. You can’t make up for a goal against by forcing things.

“And, I thought as we got down in the game the other night, all of a sudden, we forced things. And, when you force things, that just leads to bad hockey. And then, it just snowballs.”

Some of the players say they understand that, and they also understand they have not prevented routs, two games running.

What Zetterberg did “is a hugely important thing,” Blashill said. “And, it doesn’t come natural to young people who want to win so bad that they try to make up the score in one shift. You can’t do that.

“The good thing for us is that I can refer back to the way Hank would treat those shifts, and most of the guys who were around here understand that. It doesn’t make it easier, always, in the moment. But, again, that’s a maturity thing.

“Over time, you mature and you gain perspective and you understand that’s all you have to do, sometimes, is just be OK with a shift where nothing happens. That’s OK, especially when the momentum’s going the wrong way.”

A couple of fairly mundane shifts can be a powerful tool.

“Obviously that comes with some experience, you know? He was such a great player,” said Anthony Mantha said of Zetterberg’s ability to help restore order.

“Yeah, we need to figure out something to make it happen. After one of their goals or even two quick ones, we need to bounce back and slow it down and grab momentum back.”

Dylan Larkin said things will not get easier for the injury-riddled, redeveloping Red Wings, in Tampa.

“Guys don’t want to be put in spots they’re put in and make mistakes. But, everything right now seems to be magnified, and we make one mistake and it’s in the back of the net.

"For us to win a hockey game, here, we have to play a near perfect game."

Niklas Kronwall said the second lopsided loss, against the Canadiens, had a lot to do with the team putting itself in bad positions rather than taking the easy play when it came its way.

“We put ourselves in situations that we really didn’t need to, and we made mistakes that we definitely don’t have to,” Kronwall said. “It’s just a matter of trying to do it right, then.”