Wings defenseman Mike Green is recovering from a bad virus, but his return to the lineup remains unknown.

Detroit Red Wings defenseman Mike Green is feeling better after a bout with a bad virus. The Detroit News 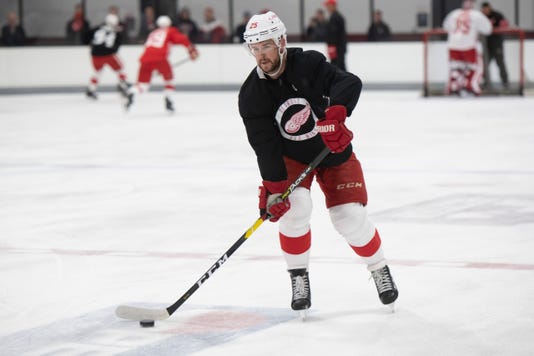 Detroit — At his worst, Mike Green wasn’t healthy enough to play hockey and didn't even have the energy to do much of anything.

The veteran defenseman, who is on this Red Wings’ trip through Tampa Bay and Florida, is recovering from a troublesome virus that has kept him from the lineup the entire season to this point.

“It’s a combination of everything,” said Green, of how he felt early on when the virus hit. “You just don’t feel right, basically, especially when you do any sort of activity where you’re pushing yourself. Then, you really feel it.

"You can’t really do anything but rest.”

Green has begun to skate, but said there’s no timeline for a return to a Wings lineup that could use his puck-moving skills and veteran presence.

“There’s a fine balance of staying on the ice and not doing too much,” said Green of the rehabilitation. “We’ve done a good job of monitoring and slowly increasing each time (on the ice) without pushing too hard.

“It’s unfortunate it takes time. I wish there were a time frame or an answer with these sort of things. You really have to listen how you’re feeling. We’ve been doing tests every week. We’re doing everything we can.”

The virus, which at one point was attacking Green’s liver, hit hard right after training camp in Traverse City, although Green was beginning to feel sluggish heading into camp.

“A little bit before, and camp really sort of pushed me to the limits. That’s when we sort of knew something was wrong," he said.

Rest has been Green’s best defense.

“It’s just one of those things that takes time," Green said. "You have to make sure you’re resting and taking care of yourself. The better and more you do, the quicker you get back.”

Seeing Green on the ice, and participating in drills with teammates, and back in the locker room, were good signs for coach Jeff Blashill.

“First, it’s good to see him, I haven’t seen him much, it’s good to have him around,” Blashill said. “He’s a great leader, and just being around us is a positive thing. A lot of guys care about him and he’s a real good leader.”

A player with Green’s NHL pedigree certainly has been missed.

“He’s an upper-tier NHL defensemen,” Blashill said. “He moves the puck out of the zone real well, he’s get you out of your zone and you don’t spend as much time on defense. He can put teams on their heels with his attack mentality. We haven’t had that.

"Certainly, it’ll be a good boost when he does return.”

The fact Green is feeling well enough to travel, and do some light practicing, is an encouraging sign.

“Absolutely; that hasn’t been the case for the last little bit,” said Green. “It’s a positive. Everything is moving forward and I’ll just continue to hope for the best.

“I’m kind of at the tail end of it (the virus). Now I’m back on the ice and feeling a lot better every time I skate. I haven’t skated all that much, so it’s about getting back into shape and getting into playing form. 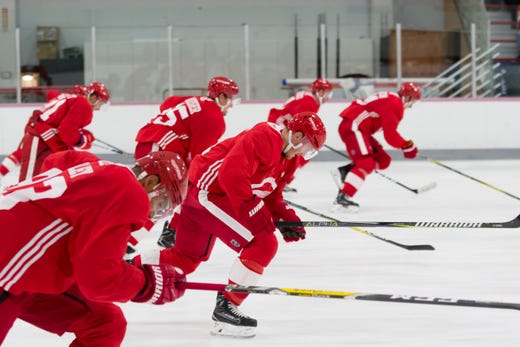 Go through the gallery for a player-by-player breakdown on the 2018-19 Red Wings by Ted Kulfan of The Detroit News. David Guralnick, Detroit News
Fullscreen 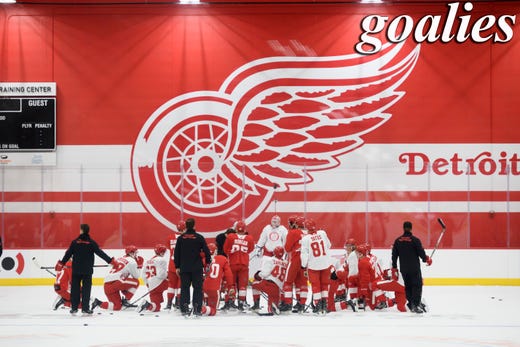 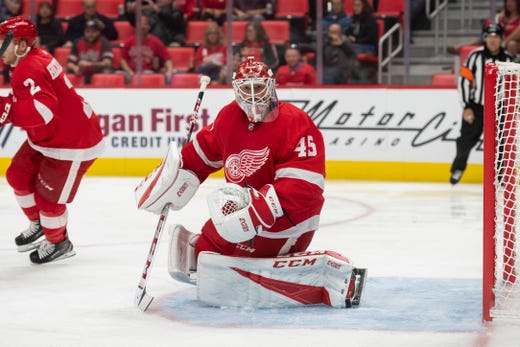 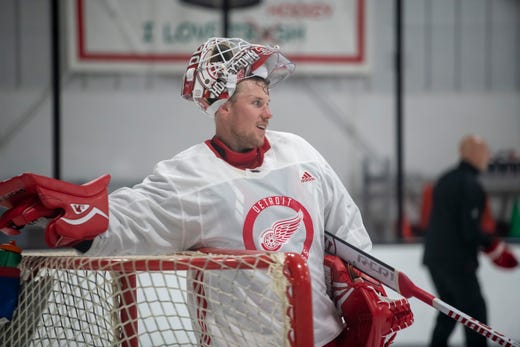 JIMMY HOWARD: AGE: 34. HT: 6-1. WT: 218. STATS: 22-27-9, 2.85 GAA, .910 SV. ANALYSIS: In the final year of his contract, Howard could be prime bait for contending teams at the trade deadline. Or he could be extended, given this position lacks depth in the organization. David Guralnick, Detroit News
Fullscreen 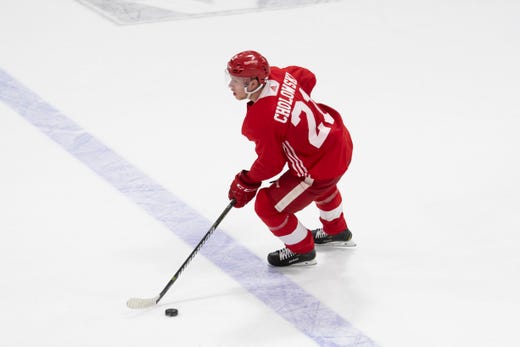 TREVOR DALEY: AGE: 35 (Oct. 9). HT: 5-11. WT: 195. STATS: 77 games, 9 goals, 7 assists, 16 points. ANALYSIS: Daley is a calming, veteran influence on a defense that keeps getting younger. He was injured during most of the preseason. David Guralnick, Detroit News
Fullscreen 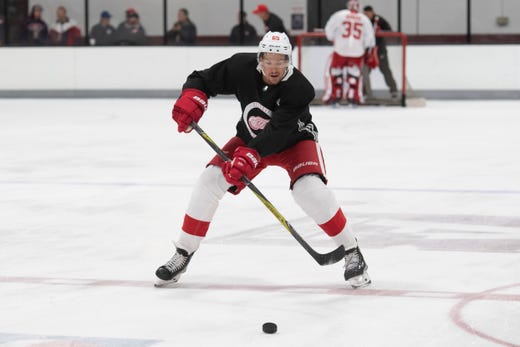 JONATHAN ERICSSON: AGE: 34. HT: 6-4. WT: 220. STATS: 81 games, 3 goals, 10 assists, 13 points. ANALYSIS: Missed most of September with injury and may not be ready to begin regular season. Without Ericsson, the Wings are smaller physically and not as experienced on defense. David Guralnick, Detroit News
Fullscreen 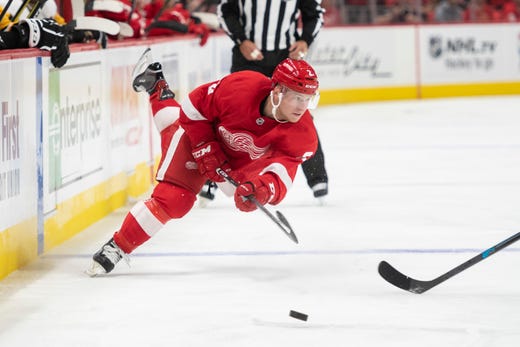 JOE HICKETTS: AGE: 22. HT: 5-8. WT: 175. STATS (Grand Rapids, AHL): 67 games, 3 goals, 9 assists, 12 points. ANALYSIS: Not the biggest player around, but few have as big a heart and play with as much passion as Hicketts. He is likely to stay on the final roster until the veteran defensemen get healthy. David Guralnick, Detroit News
Fullscreen 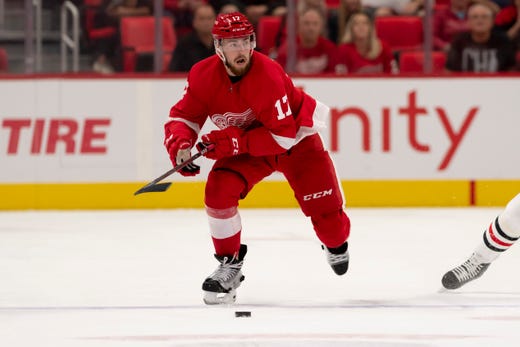 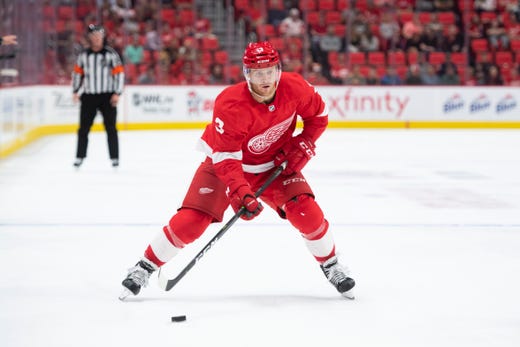 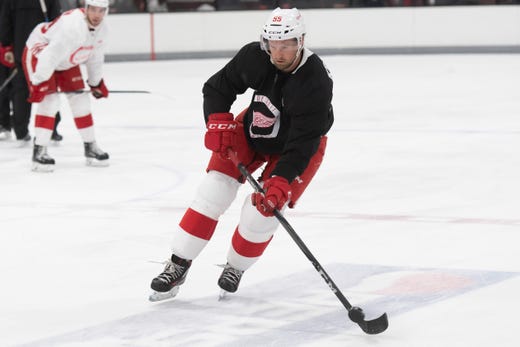 NIKLAS KRONWALL: AGE: 37. HT: 6-0. WT: 194. STATS: 79 games, 4 goals, 23 assists, 27 points. ANALYSIS: The veteran warhorse is in the final year of his contract – and likely final year of his career. It’s a testament to his talent and will that Kronwall remains a key figure on this defense. David Guralnick, Detroit News
Fullscreen 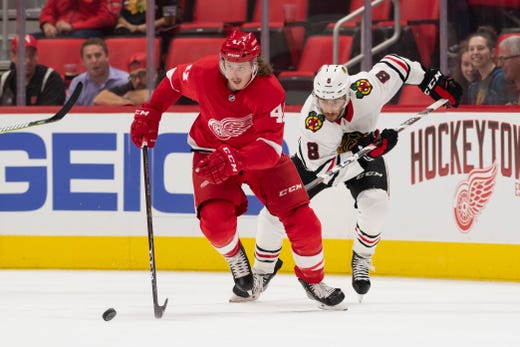 LIBOR SULAK: AGE: 24. HT: 6-1. WT: 170. STATS (Finland): 42 games, 9 goals, 23 assists, 32 points. ANALYSIS: Intriguing prospect who has unique athleticism and can out-skate some of his mistakes. Still raw defensively, and time in the AHL could be valuable this season once all the Wings’ injuries clear up. David Guralnick, Detroit News
Fullscreen 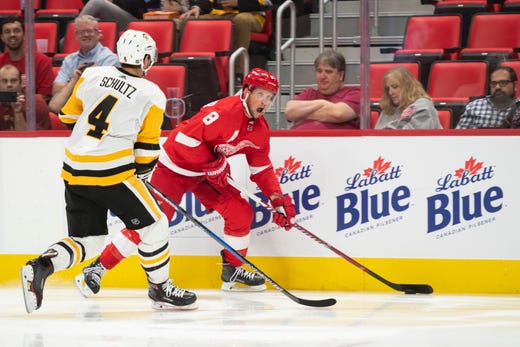 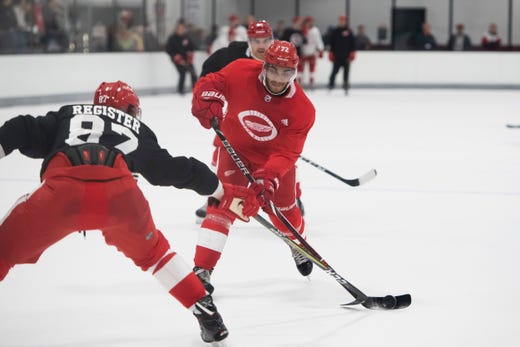 ANDREAS ATHANASIOU: AGE: 24. HT: 6-2. WT: 188. STATS: 71 games, 16 goals, 17 assists, 33 points. ANALYSIS: Given increased ice time in the preseason, Athanasiou was among the most impressive players on the roster. It’ll be interesting to watch if that carries over into the regular season. David Guralnick, Detroit News
Fullscreen 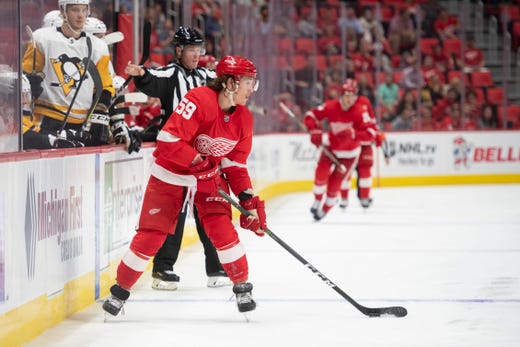 TYLER BERTUZZI: AGE: 23. HT: 6-0. WT: 190. STATS: 48 games, 7 goals, 17 assists, 24 points. ANALYSIS: Gritty winger who can play up and down the lineup and be effective in a variety of ways. Bertuzzi has matured into multi-talented hockey player. David Guralnick, Detroit News
Fullscreen 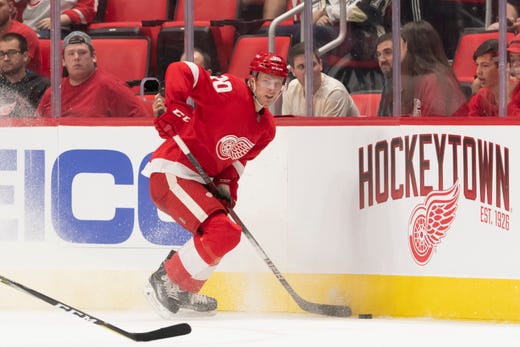 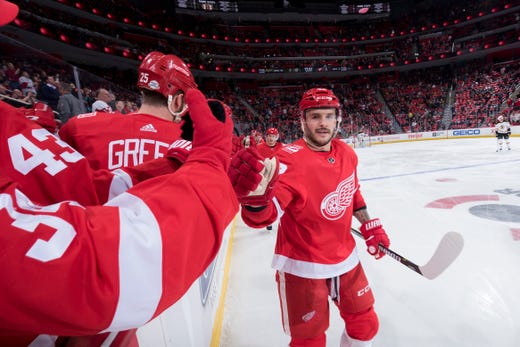 MARTIN FRK: AGE: 25. HT: 6-1. WT: 205. STATS: 68 games, 11 goals, 14 assists, 25 points. ANALYSIS: Missed much of training camp and the preseason with a back injury but Frk showed enough last season – particularly with that dangerous shot – to nail down a roster spot. Must be more of a factor at even strength. David Guralnick, Detroit News
Fullscreen 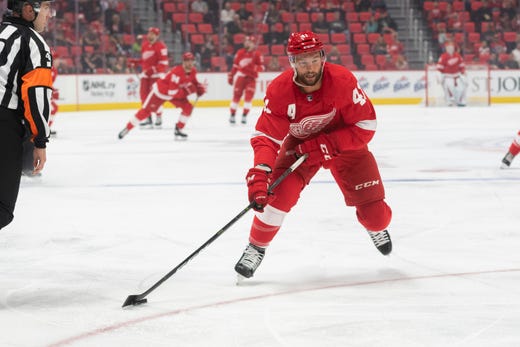 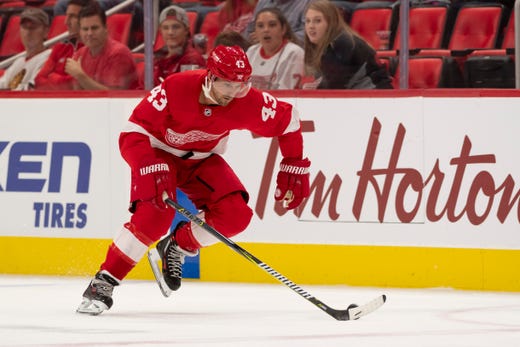 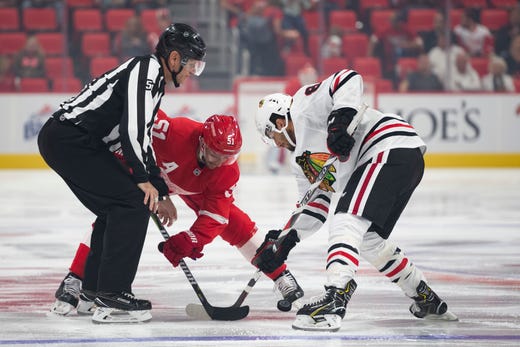 FRANS NIELSEN: AGE: 34. HT: 6-1. WT: 188. STATS: 79 games, 16 goals, 17 assists, 33 points. ANALYSIS: With Henrik Zetterberg’s retirement, Nielsen has an increased role on this roster. But in the near future, Nielsen’s talent and character might be more suited on a playoff contender rather than this rebuilding team. David Guralnick, Detroit News
Fullscreen 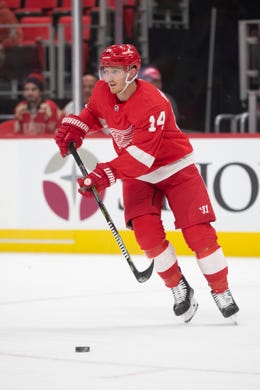 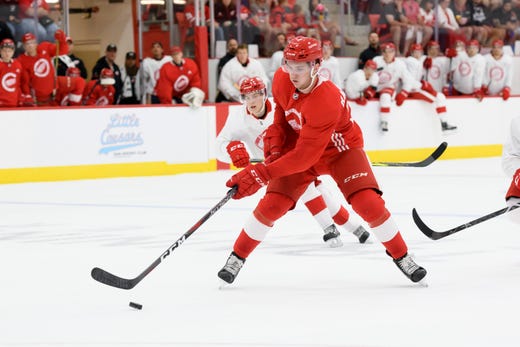 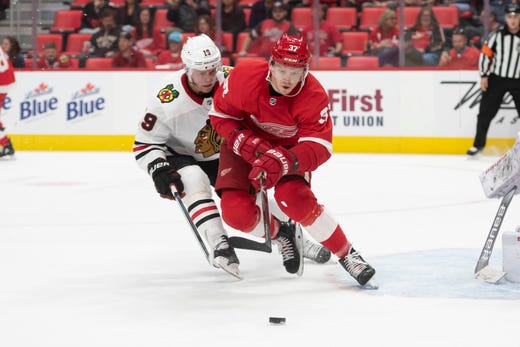 EVGENY SVECHNIKOV: AGE: 21. HT: 6-2. WT: 199. STATS (Grand Rapids, AHL): 57 games, 7 goals, 16 assists, 23 points. ANALYSIS: Slowed by an injury currently, the Red Wings are deciding whether to keep Svechnikov in the NHL or return him to Grand Rapids. Looked a bit quicker, faster in training camp, and was effective around the net. David Guralnick, Detroit News
Fullscreen 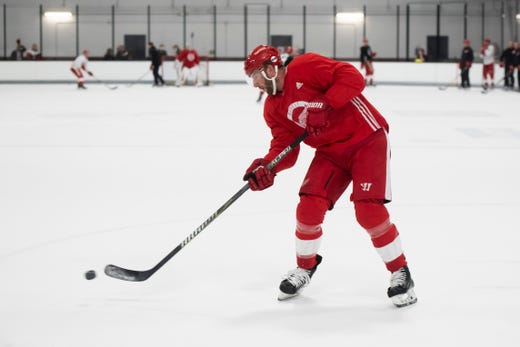 THOMAS VANEK: AGE: 34. HT: 6-2. WT: 214. STATS (Columbus/Vancouver): 80 games, 24 goals, 32 assists, 56 points. ANALYSIS: There was some fan unrest when the Red Wings brought Vanek back, but nobody can deny he makes his linemates better with his creative passing and offensive instincts. He possesses a terrific offensive mind. David Guralnick, Detroit News
Fullscreen 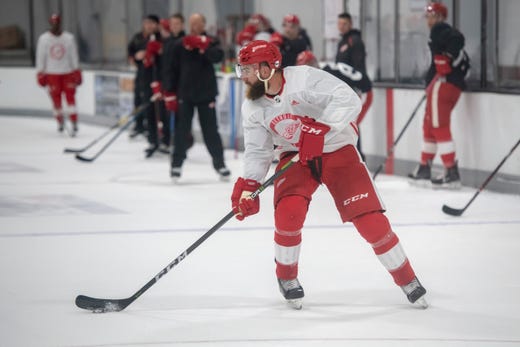