December will bring plenty of tests for Red Wings

Heading into December, the Detroit Red Wings are playing a schedule heavy with playoff-caliber teams hovering above .500 these days.

December will bring plenty of tests for Red Wings 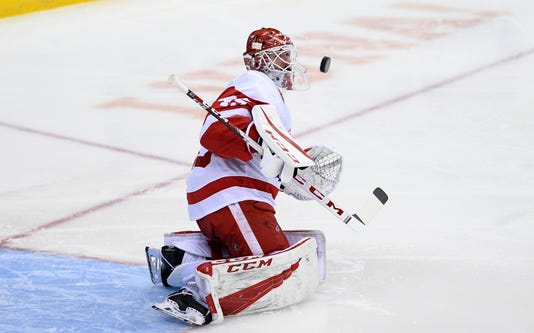 Washington, D.C. — They capitalized on a home-heavy schedule against teams that weren’t playing particularly well for most of the month.

But, heading into December, the Detroit Red Wings are playing a schedule heavy with playoff-caliber teams above .500.

It’s going to be a difficult test, as Friday’s 3-1 loss to the defending Stanley Cup champion Washington Capitals showed.

“We need to make up some ground for the start we had,” forward Dylan Larkin said of the Wings’ 1-7-2 start to the season, although the Wings have won 9 of their last 12 (9-3). “We know that we’ve done a good job in the past month, but these games coming up, we need to win these games and do better against teams in our conference.

If you start with Friday’s game against Washington, the Wings have a stretch of 20 games until December 31.

Only three of those 20 teams, heading into Friday’s schedule, had records under .500, a small indication of the strength of the upcoming schedule.

But the Wings showed Friday, even in defeat, they can play against a quality opponent, and have defeated playoff teams such as Boston, New Jersey, Columbus and Dallas during their recent turnaround.

“We know in this room we can compete on a nightly basis against any team in this league,” forward Justin Abdelkader said. “Washington is a real good team, a real good team on their home ice. We were right there.

“You want to test yourself each night.”

Said coach Jeff Blashill: “Every game we prove to ourselves when we play, we’re as good as anybody in the league. We just have to play.”

Saturday, back at Little Caesars Arena, the Wings get their first look at one of the surprise teams in the NHL this season, the Buffalo Sabres.

In a stretch when the Wings have an opportunity to test themselves against some of the NHL’s heavyweights, this will be an interesting opportunity.

“Buffalo is a real good team,” Blashill said. “They have a number of high picks that are starting to come into their own. It’ll be a good challenge. But that’s the league every night.”

“Certainly Eichel is at an age, I’ve coached him, I know how talented he is,” Blashill said. “He’s as talented as anyone in the league. He’s playing real good, but he’s certainly not alone.”

The Red Wings’ power play has largely been a strength this season, but not lately.

Friday's inability to score on three opportunities put them at 0-for-7 in the last four games, but moreso Friday, it was the inability to convert at crucial times that hurt the Wings.

The Wings had power-play chances while leading 1-0 early in the second period, and tied 1-1 early in the third, and weren’t dangerous either time.

The Wings killed all three Washington power plays, as well.

“Our penalty kill did a great job,” forward Justin Abdelkader said. “Our power play had some chances, and if we put one in and make it 2-0, or get a timely goal, those are huge for us. It didn’t happen tonight.”

Jonathan Ericsson (lower body) is day to day, Blashill said, and will be re-evaluated Saturday back in Detroit.

… Christoffer Ehn drew into the lineup, with Martin Frk being a healty scratch. Ehn played 8:23, was minus-1, and had 1 giveaway.

“He can do that, he’s got a real talent,” Blashill said. “His offensive mind is great. He had another (similar) pass from behind the net later in the game. He’s got that in him for sure.”

… It didn’t happen Friday, but the Wings have been feasting on the Metropolitan Division. The Wings are 5-2-1 on the season against the opposite division in the Eastern Conference.

… That’s seven consecutive games without a goal for Gustav Nyquist, who only has two for the season. Nyquist, though, leads the team with 14 assists.

… Jimmy Howard is expected to get the start in net against Buffalo on Saturday.

Outlook: The Sabres (15-6-2) have won eight straight and are among the hottest teams in the NHL. … C Jack Eichel (21 assists, 26 points) and LW Jeff Skinner (15 goals) are leading the offense, while G Carter Hutton (.919 save percentage) has stabilized that position.