Blashill has a good problem to have right now in terms of his lineup. Blashill has six defensemen slots to fill in the lineup — but seven healthy defensemen.

Detroit — It’s a good situation to be in for a coach, although for the players involved, it’s not so great.

Coach Jeff Blashill has a good problem to have right now in terms of his lineup. Blashill has six defensemen slots to fill in the lineup — but seven healthy defensemen who can play, now that Jonathan Ericsson is healthy and ready to play.

Actually, there are eight, Blashill is quick to point out, if you include Luke Witkowski, who has played well in brief looks.

And the major thing is, none of the six playing regularly deserve to be out of the lineup.

So, for now, Ericsson specifically will sit.

“He’s available to play, we’re just making the decision to go with the six we have that have been playing,” Blashill said after Monday’s morning skate. “It’s a good problem to have. As I’ve explained to our defensemen, we have seven good defensemen and we’ll make a decision on a nightly basis who is going to be in those top six, and actually I would include Witter (Witkowski), he’s been real good when he’s played, so you have eight guys who’ve played real good at different times.

“Who can separate themselves? Those are the decisions as a coach, you have to make hard decisions, but that’s a great position to be in.

“It’s a way better position to be in than not having those decisions to make.”

Ericsson has been out since injuring himself in a postgame workout Nov. 1. It’s been a frustrating season for Ericsson, who has only played six games this season with one point, and a plus-one plus-minus rating, after an upper body injury in training camp delayed his season debut until Oct. 20.

Defenseman Nick Jensen was a healthy scratch to begin the season, but Jensen has played his way into being an important part of the defense.

“He’s been real good since then,” Blashill said of Jensen’s Opening Night healthy scratch. “He’s really competitive, and he can skate against the best players.”

In certain situations, it wouldn’t be surprising to see Blashill rest Niklas Kronwall, particularly on the second games of back-to-backs, although Kronwall, too, hasn’t done anything to play himself out of the lineup. 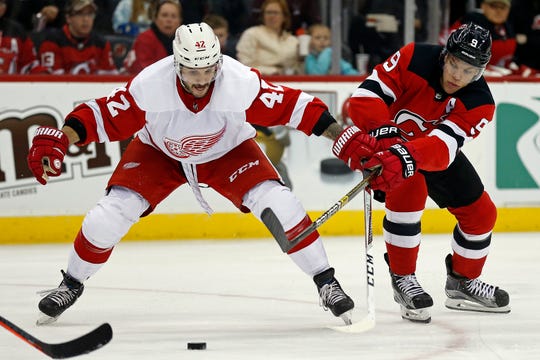 Forward Martin Frk was set to return to the lineup Monday against Columbus after being a healthy scratch the last two games.

With the Wings’ slumping on the power play, Frk’s hard one-timer could be a boost for a unit that is looking for a spark.

“When Frkie is on it, it’s a different look than when he’s not on it,” Blashill said. “Certainly he’s a guy who can score with one shot. Our power play has been fairly the same with and without him the last two years from a numbers standpoint, it’s identical both ways.

“But it’s a different look is what I’d say.”

The Wings entered Monday’s game tied for 16th in the NHL on the power play (20 percent), and haven’t scored in the last five games (0-for-11).

Monday’s game was the third and final game between the Wings and Columbus — former division rivals that seemingly played every couple weeks — this season.

… Entering Monday’s games, only Anaheim has had more overtime games than the Wings (nine)

… Columbus defenseman Zach Werenski (Grosse Pointe/Michigan) continues to be a key contributor for the Blue Jackets. Werenski has 13 points (four goals) in 23 games, while playing over almost 22 minutes per game (21:48).