Remember that ugly start to this regular season for the Red Wings? All those key, impactful injuries? It’s beginning to look like that again. 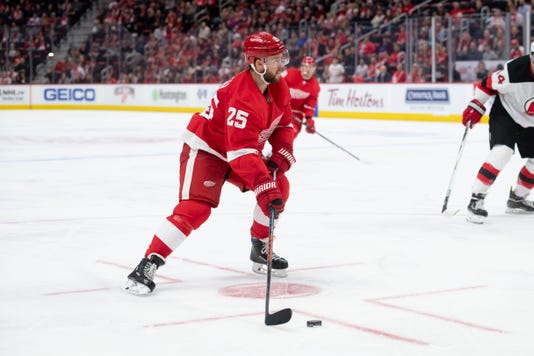 Detroit — Remember that ugly start to this regular season for the Red Wings? All those key, impactful injuries?

Coach Jeff Blashill announced after Friday’s morning skate that defenseman Mike Green will be out three to five weeks with a lower-body injury.

The Wings sent down defenseman Brian Lashoff to Grand Rapids, and brought up defenseman Filip Hronek — whose skill set is more similar to Green’s.

Hronek was to be in the lineup Friday against Ottawa.

Green’s injury is the latest of some tough losses throughout the lineup.

“You just keep moving,” Blashill said. “You can’t control injuries at all. So we’ll just continue to focus on what we can control. It sounds like cliché but it’s life. Whether it’s hockey or anything else, you better just focus on what you can control and that’s the group we have available to us.

“And without a doubt, tonight, tomorrow, and so on moving forward, we’ll have a group to win. We have to compete at a high level, a great attention to detail, and we have to outwork (opponents).

"If we do all those things, we’ll put ourselves in a great position to win a hockey game.”

Losing Green is a difficult loss, as he was playing, arguably, some of the best all-around hockey of his career. Green, who didn’t get into the lineup until Oct. 26 because of complications from a virus, has 16 points (three goals) in 23 games, with a team-best plus-10 plus-minus rating.

“He’s been excellent,” Blashill said. “Anytime a guy is playing excellent, it’s unfortunate for him and the team (when he’s injured), and certainly for all of us. He was really grooving. He was playing well, and our record reflected the time he spent with us compared to the time spent without him to us.

“It’s unfortunate for sure, but how much it hurts or doesn’t hurt depends on how the other guys play. Not just Filip but the other five (defensemen). If they play great in (Green’s) absence, all six play great in his absence, you don’t feel the loss nearly as much. By no means is it a barrier to success.”

Defenseman Filip Hronek is on his way back to the Red Wings. (Photo: David Guralnick, Detroit News)

Hronek had 18 points (five goals) in 20 games with the Griffins, with a plus-6 rating. With the Wings at the start of this season, Hronek had three points (one goal) in six games, with a minus-2 rating.

“He’s steadily progressed,” Blashill said of Hronek’s time in Grand Rapids. “He’s had a number of good games, so his progression has been good. There are certainly things he can get better at. We need Filip to come up here and play with confidence. Early in the year, he struggled a little bit and got overly hard on himself. That’s a good quality and bad quality. Being self accountable is good, but when you cross the line and being to hard (on yourself), sometimes that’s bad.

“He just needs to come up and play. He’s a good hockey player. His game is probably better than his skill set. He’s not 6-foot-4 and skates like the wind, but he has a lot of hockey smarts, and I also think he’s a real good competitor. Just do the things you’re real good at and if he does that, he’s an NHL player. It’s just a matter of when, and hopefully it’s right now."

Outlook: The Islanders (14-12-4, 32 points) have 20 games at their former home (Nassau Coliseum) until their proposed new rink is ready, and this is one of them. … The Islanders defeated the Wings 3-2 last week in Detroit. … C Mathew Barzal (22 assists, 25 points) and RW Josh Bailey (24 points) are leading offensively.