His numbers aren't pretty, but Red Wings goaltender Jonathan Bernier is providing the Red Wings with opportunities to win with his work in net

Jonathan Bernier's numbers aren't pretty, with a 3.58 goals-against average and an .890 save percentage, but he's given the Red Wings a chance to win on most nights.(Photo: David Guralnick, Detroit News)

Unionville, N.Y. — Jonathan Bernier is used to it. At this point in his career, there aren’t any surprises.

Being a backup goalie in the NHL, life isn’t always fair. You wait for the coach to say you’re going to play, though you never know exactly when that might be and, when you do play, it’s usually not ideal situations.

Bernier has been through this situation often in his NHL career. He’s been very good at it.

And though Bernier’s statistics might not look all that inspiring currently, occasionally it’s wise to examine them more closely, such as Saturday’s 4-3 shootout loss to the New York Islanders.

The loss was disappointing, sure. But Bernier did all he could, and more.

Bernier made 45 saves against the Islanders, including a staggering 21 in the third period when the Wings appeared to be stuck in their zone the entire 20 minutes.

He stopped a pair of good chances in overtime. Only the Islanders’ Mathew Barzal was able to score for either team in the shootout.

“(It) was real tough, to be honest,” Bernier said of the conditions inside Nassau Coliseum. “It was hot out there, and it felt like they weren’t leaving our zone. So, sometimes, you get 45 shots (against you), but they come in waves. But (Saturday) it just felt like they were in our zone, and when you have (to face) power plays, you have to be on your toes.”

Bernier and the Wings faced six Islanders power plays — the Wings only had one — which proved to be quite taxing.

But Bernier held up nicely, which he has all season.

“Bernie was great,” said forward Thomas Vanek, who had a goal and two assists. “Our penalty killing was great. To give up (six) power plays somehow, and give up one (goal), that’s a great night by our penalty killers and especially our goaltender.”

Despite often playing the back end of back-to-back games, being the last line of defense for a tired team, and facing some huge shot totals, Bernier has done all the Wings could have hoped for.

But they aren’t indicative of the way the 30-year-old Bernier has played.

“He’s played in hard games, for sure,” coach Jeff Blashill said. “His play is way better than his numbers. He’s been around long enough to know not to worry about the numbers. Just worry about his play.

“If he keeps playing like this, it’ll find its way to even itself out over the course of a season. He just has to keep doing what he’s been doing. Certainly he’s been put in some tough situations and done a great job overall.

“He’s played real good. He gave us a chance to win the hockey game (Saturday), chance to gt a point.

Bernier knows what his statistics say.

“Definitely not something I’m looking at right now to stay positive,” Bernier said. “I’m focusing on myself and little things that make me successful.

“I’d like to definitely get more wins. (But) numbers are numbers. It’s the win column I’d like to improve on, for sure.”

Bernier has been the starting goaltender on the second night of consecutive games in three of his last five starts.

“Back-to-back games, the guys are tired,” Bernier said. “Those (games) are never easy. We’ve played a lot of hockey lately. You have to come in and make that one extra save.”

The Wings certainly made a commitment when they signed Bernier to a three-year contract worth $9 million on July 1.

The understanding was Bernier would back up Jimmy Howard and the two would form a steady, veteran combination for the next several years before some young Wings’ goaltending prospects are ready for the NHL.

And that likely will be the plan going forward.

But Howard can be an unrestricted free agent on July 1, and with several contenders — or would-be contenders — in need of stable goaltending, rumors persist general manager Ken Holland could trade Howard if a first-round draft choice is in the return package.

All of which makes Bernier that much more valuable down the road. 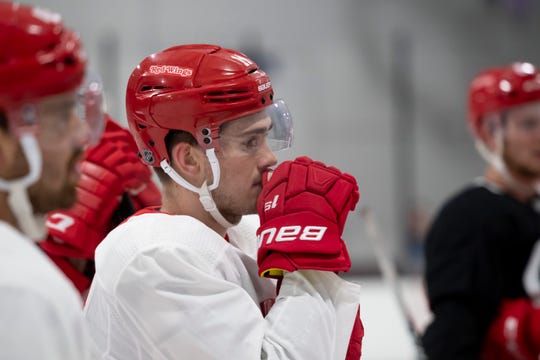 Zadina hurt himself in the third period on a play near center ice and immediately headed to the locker room.

Zadina didn’t play Sunday in Rockford, and will be re-evaluated Monday.

Zadina had a goal in Saturday’s game, ending an eight-game drought. In 26 games, Zadina has 17 points (eight goals, nine assists) with a team-worst minus-12 plus-minus rating.

The injury could complicate the possibility Zadina gets to play in the world junior championships, Dec. 26-Jan. 5.

The Wings released Zadina for the tournament, enabling him to play for his native Czech Republic. Zadina was expected to play Wednesday for Grand Rapids, then leave for the tournament in Vancouver later this week.

The severity of the injury could eliminate that possibility.