Though there have been growing pains, no one is disappointed with the way Rasmussen has played, as the halfway mark in the schedule approaches. 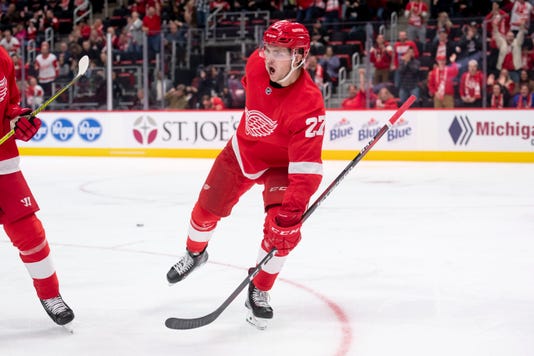 Raleigh, N.C. — If Red Wings fans were looking for rookie Michael Rasmussen to duplicate offensive statistics like the ones he had in junior hockey, they were dreaming.

Rasmussen, 19, went straight from junior to the NHL this season. Though there have been some growing pains, no one is particularly disappointed with the way Rasmussen has played, as the halfway mark in the schedule approaches.

“Overall, I’ve gotten better,” Rasmussen said after Thursday’s morning skate. “It’s a big process. It’s not going to take a half a season — it’s going to take a bit (of time) here. I’ve done a good job of improving and getting better.”

Last season in Tri-City of the Western Hockey League, Rasmussen had 31 goals and 28 assists (59 points) in only 47 games. His last two seasons combined, Rasmusssen produced 114 points (63 goals) in 97 games.

He may be a 6-foot-5 power forward (in the making), but Rasmussen wasn’t going to produce those types of offensive numbers in the NHL. Rasmussen went into Thursday’s game not having a goal in 15 games.

“I’m not worried, I don’t look at production in the short-term as much as I look at process and he’s played good,” coach Jeff Blashill said. “He’s been big and strong and physical. He can get back to being a little more physical than he’s been, but overall, he’s been good.

“He hasn’t been great, he’s been good, we have to get him back to playing great.”

Rasmussen understands producing offensively at the NHL level is different than playing against other 17- or 18-year olds, and it’s more difficult to create those opportunities to score.

“I just have to get back to playing simple and trying to be in their zone.”

Blashill has been pleased with Rasmussen’s development, especially with skipping the minor leagues — Rasmussen wasn’t eligible for the American League this year given his junior eligibility, he was going either play in the NHL or WHL.

“It’s a huge jump and one he’s handled pretty well,” Blashill said. “It takes mental toughness and he’s done a good job with that. When he’s had struggles, he’s been able to get himself out of it, and that’s a real important thing.

“He’s a good player. He’s learning to be heavier on the puck.”

Red Wings rookie forward Michael Rasmussen says he's getting used to "the battles" in the NHL. The Detroit News

Blashill and his coaching staff have made it a point this entire season to make sure Rasmussen is using his size and strength to protect the puck and be a dominant force around the net.

“The next step is learning how to create offense out of being heavy on the puck,” Blashill said. “Not just to hold onto it (the puck) but how to find open guys the way the real good down-low players. That’s the next progression for him.

“But he’s had a good progression of learning how to win those pucks and being heavy on it.”

“His best asset is his net-front ability,” Blashill said. “He’s also on the power play unit that hasn’t gotten out there the last number of games, the other unit has gone first and they’ve scored a couple times, which is a positive thing. But that’s another area where he’s going to score his goals.”

Zadina off to worlds

Forward Filip Zadina was reassigned from Grand Rapids to the Czech Republic national team for the upcoming world junior championships.

Zadina, the Wings’ first-round pick in June, played for the Griffins on Wednesday after suffering a minor hamstring injury over the weekend. Zadina has 17 points (eight goals, nine assists) in 27 games.

Zadina made the All-Tournament team last year in the world juniors, with seven goals and one assist (eight points) in seven games with the Czech Republic.

The last Griffins’ player to be released for the junior tournament was Tomas Tatar, in 2009-10, who left to represent Slovakia.