The Red Wings faced three of the better teams in the NHL over their last three games – Toronto, Pittsburgh and Dallas. 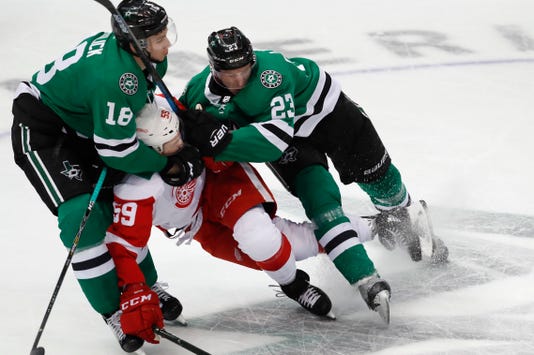 Dallas – The Red Wings faced three of the better teams in the NHL over their last three games – Toronto, Pittsburgh and Dallas.

The task was going to be tough going into all three of those games, but the Wings didn’t give themselves much of a chance by allowing five goals in each of the losses – 5-4 against the Maple Leafs (overtime), 5-2 against the Penguins and 5-1 against the Stars.

The Red Wings, as currently constructed, and especially with the injuries they have, aren’t likely to score six goals against those teams.

So, simply playing better team defense and limiting scoring opportunities would be a good place to start for the slumping Wings, who have lost eight of their last nine games.

“We have to find a way, shift-by-shift, to dig in, we have to score on our chances, and we need to quit giving up so many goals,” said coach Jeff Blashill after Saturday night’s loss in Dallas. “I talked to our team the other day about not letting a goal bother us, but when you’re giving up five or six goals, you’re not going to win.

“We need to find a way both individually and as a team to be way better. Systematically to be better, and as a group to be better.”

In each of the three losses, against three dynamic offenses that can strike quickly, the Wings allowed multiple goals in a short amount of time.

And instead of leading, or remaining close, the Wings found themselves trying to catch up.

“That’s what happens when you give up goals,” Blashill said. “We have to be better as individuals; too many guys didn’t play good enough. They have to play better. That’s just the reality of it.

“We (the coaching staff) talked to the group after the game and said, ‘Why are we giving up so many (goals)? And it’s not necessarily one thing. It’s a combination of bad plays. We have to correct it.”

Another big factor in the loss to Dallas was that the Wings didn’t spend much time in the offensive zone – didn’t really give themselves an opportunity to make it difficult on the Stars, or their goalie, Ben Bishop.

“We just need to make sure we’re playing fast in our own zone and coming up together. When we get in the offensive zone, we can be a good offensive zone team.”

Abdelkader has sensed this being a problem during the recent losing streak.

“We complain about penalties and not getting enough calls, but when teams can grind in the offensive zone and spend time there, and that’s when a lot of penalties are called,” Abdelkader said.

The lone bright spot for the Wings was Dylan Larkin scoring his 17th goal – already topping last season’s 16 – and extending his point streak to a current NHL-leading 13 games.

“He’s been consistent all year,” forward Frans Nielsen said. “He competes every night, shows up and works as hard as he can. You can see he’s determined. It’s fun to watch him grow as a player.”

“We don’t really care how it looks, we have to find a way to get a win,” Nielsen said.

Outlook: The Panthers (16-15-6, 38 points) moved ahead of the Wings in the Atlantic Division with a come-from-behind victory Saturday over Philadelphia. … LW Jonathan Huberdeau (34 assists, 44 points) and C Aleksander Barkov (15 goals, 39 points) have had stellar seasons.