Red Wings' Kronwall, Cholowski on opposite ends of deliveries

Niklas Kronwall and Dennis Cholowski, on opposite ends of their NHL career spectrums, had very different delivery roles on Thursday night.

Red Wings' Kronwall, Cholowski on opposite ends of deliveries 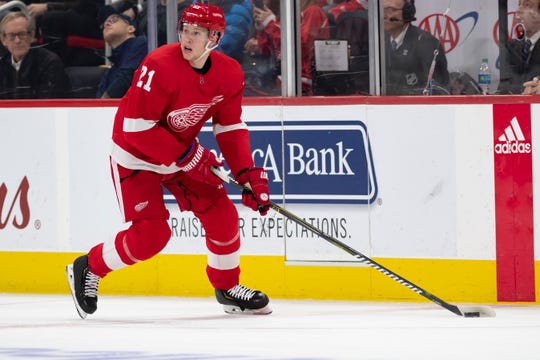 Detroit — At polar opposite ends of their NHL careers, Niklas Kronwall and Dennis Cholowski were part of opposite deliveries on Thursday night.

Kronwall, the 38-year-old Swede, delivered one of his signature hits late in a 3-2 win against Ottawa, while Cholowski was on the wrong end of some news after the game.

Red Wings coach Jeff Blashill informed Cholowski that he was headed back to Grand Rapids after previously spending his entire rookie season in Detroit.

“We’re doing everything we can to best develop him for next fall and be the very, very best player he can be walking into camp,” Blashill said Friday.

Blashill expected Cholowski to play Friday night for the Griffins on his 21st birthday. After a strong start to the season, Cholowski’s play has cooled. Cholowski is last on the Red Wings at minus-20 in the plus-minus stat.

Meanwhile, Kronwall’s hit brought back memories for fans and was a reminder sent to Ottawa’s Rudolfs Balcers in the open ice, a message delivered dozens of times over a 15-year career.

No penalty was called on Kronwall for the hit, which sent Balcers’ left glove flying more than 10 yards toward center ice.

“It was more a bump than anything,” Kronwall said after the game. “I enjoy that aspect of the game. I think there’s not enough at times. That’s just the way the game is played now.”

Kronwall has all but confirmed this will be his final season in a career spent entirely with Detroit, with whom he won the Stanley Cup in 2008.

Kronwall is averaging 19 minutes, 58 seconds of ice time, his most in three years.

It’s the type of career the Red Wings hope to get from young players like Cholowski, who was not available to reporters after Thursday’s game.

“I hope he goes down there, he plays great hockey, he builds up that great confidence that he had at the beginning of the year,” Blashill said. “He’s in a position to challenge to be a real top-four defenseman in the NHL.”

Forward Tyler Bertuzzi is expected back in the lineup Saturday at Philadelphia for the first time since suffering a concussion on Jan. 22 in Edmonton.

Blashill said he expects Bertuzzi to return to the line centered by Larkin with Gustav Nyquist on the right side.

The Red Wings were without center Frans Nielsen (stomach bug) at Friday’s practice.

Blashill said Nielsen will travel to Philadelphia but is questionable for Saturday after scoring the winner on Thursday.

Goaltender Jimmy Howard participated in the first portion of practice but left the ice partway through the session, which lasted under an hour.

Blashill said it was for “energy management” for Howard, who played his 500th career game on Thursday.

Athanasiou scored his second penalty-shot goal of the season in the first period on Thursday, becoming the first NHL player to make two this year.

Athanasiou’s three attempts this season are also the most for a Red Wings player since Ebbie Goodfellow attempted six in 1934-35. Goodfellow went 1 for 6 that season.

Speaking of way back, the Red Wings do not have a regulation win in Philadelphia since Jan. 25, 1997.

That was about four months prior to Darren McCarty’s iconic Stanley Cup clinching goal.

That year, the Red Wings swept the first two games in Philly en route to their first Cup since 1955.

Detroit won a shootout there in 2016 as Athanasiou backhanded one home past Steve Mason, but are 1-14 with one loss coming in overtime since the 4-1 win over Eric Lindros and the Flyers in ’97.