Just like over the weekend in Philadelphia, the Red Wings made a huge third-period rally Wednesday, only to lose, 5-4, to Chicago.

Coach Jeff Blashill on the Red Wings' comeback falling short against the Blackhawks. The Detroit News 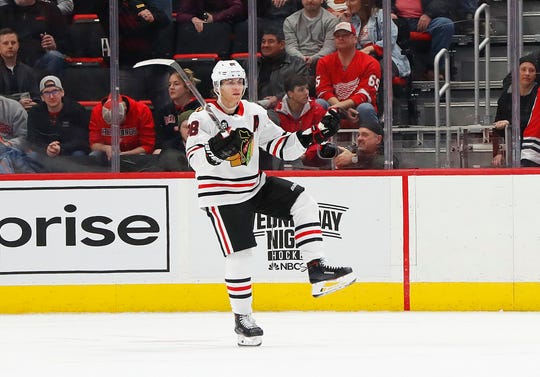 Detroit — The Red Wings are getting good at making these dramatic comebacks — only to fall a bit short.

Just like over the weekend in Philadelphia, the Red Wings made a huge third-period rally Wednesday, only to lose, 5-4 in overtime, to the Chicago Blackhawks.

Patrick Kane scored his second goal of the game, and 38th of the season, firing a shot past goaltender Jonathan Bernier from the low circle at 2 minutes, 42 seconds of overtime, to win it for Chicago.

But that came only after the Wings had scored three goals in the final 20 minutes to force the extra period.

Andreas Athanasiou tied the score 4-4 with his second goal of night at 18:34 of the third period, Anthony Mantha finding Athanasiou with a pass through the slot for Mantha's fourth assist of the game.

Athanasiou and Dylan Larkin both had two goals for the Wings.

“I don’t think we were ready from the start,” Mantha said. “Obviously it shows we have character in this room (coming back). It’s the second time in three games we come back. We just need to find a way to finish it.”

The Wings fell behind 4-1 after two periods, but it was the middle 20 minutes that particularly bothered coach Jeff Blashill.

“The second (period) was embarrassing in the sense we didn’t dig in,” Blashill said. “This is a great town, they love people who will work and compete and I didn’t think we worked and competed. We kind of accepted it was 4-1.

It was again encouraging for the Wings that young players such as Larkin, Mantha, Athanasiou, and Tyler Bertuzzi stood out in the comeback.

“Larkin, Mantha and Bertuzzi, that line was the best line on the ice throughout the game, and Double-A heated up as the game went along,” Blashill said. “That’s 22 goals for (Athanasiou). That’s a big number.” 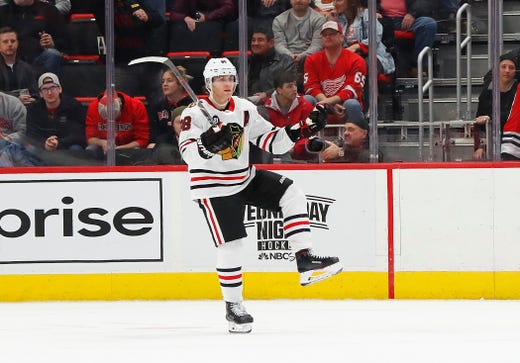 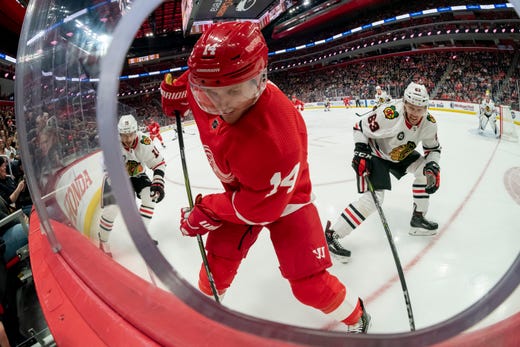 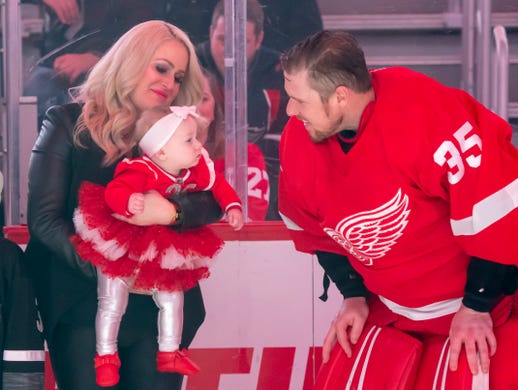 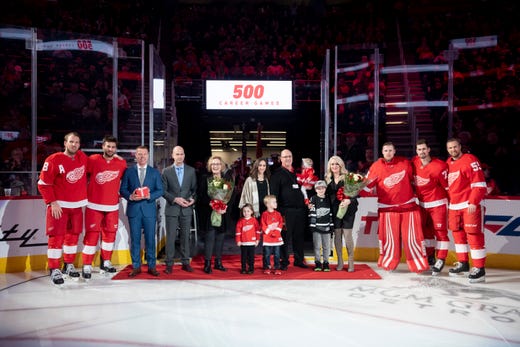 Family and teammates of Detroit goaltender Jimmy Howard participate in a ceremony honoring his 500th game which was against Ottawa on February 14. David Guralnick, Detroit News
Fullscreen 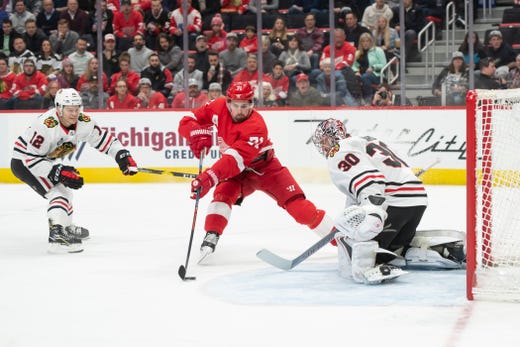 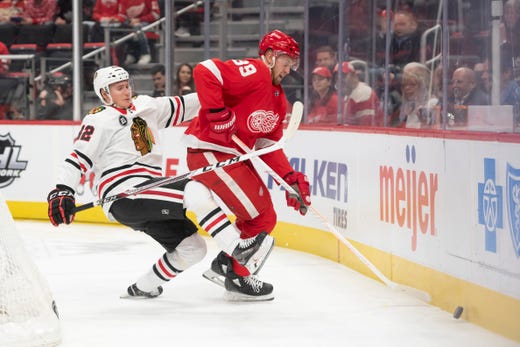 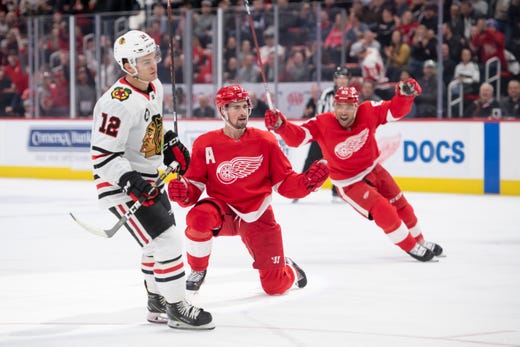 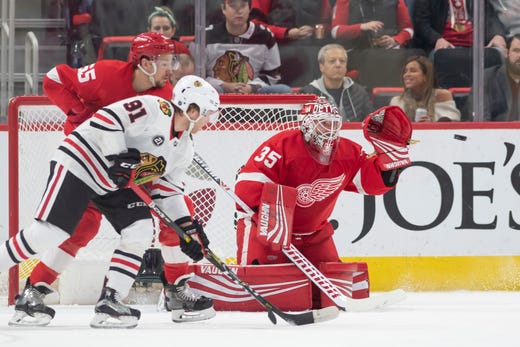 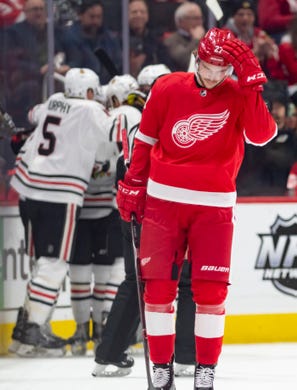 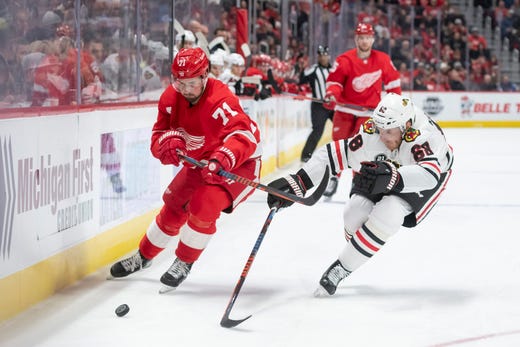 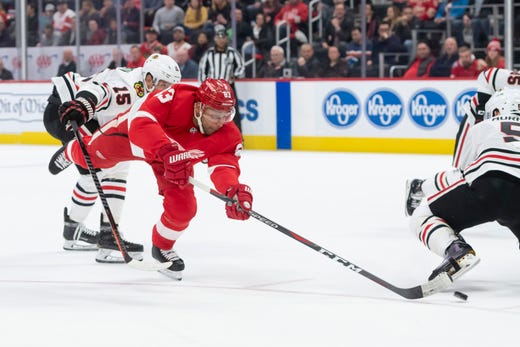 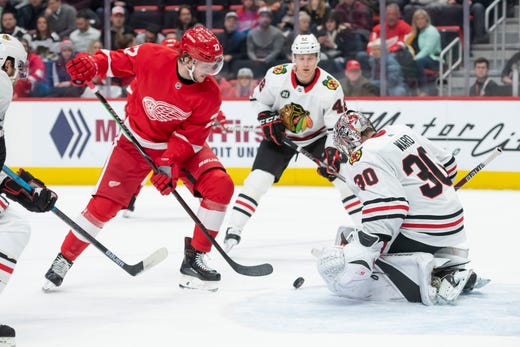 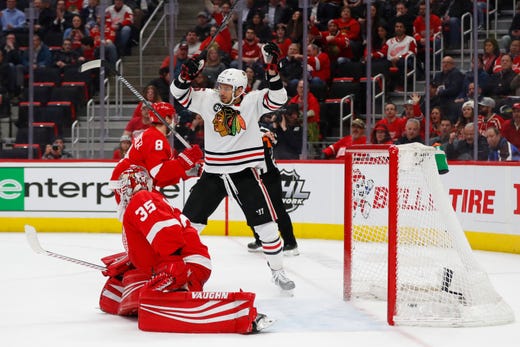 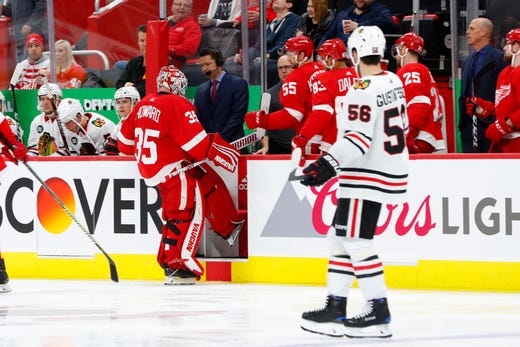 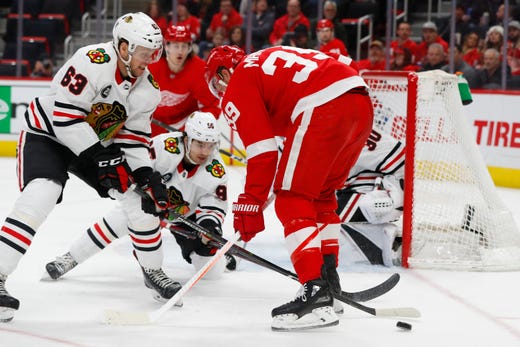 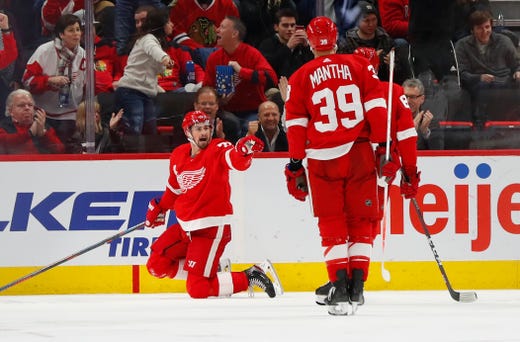 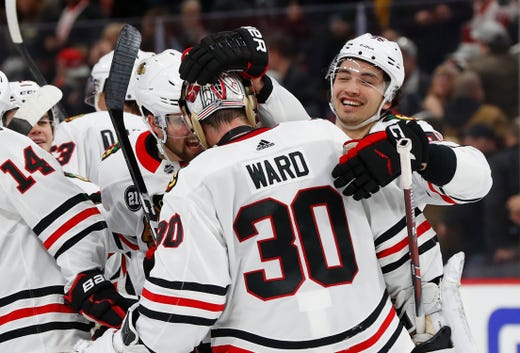 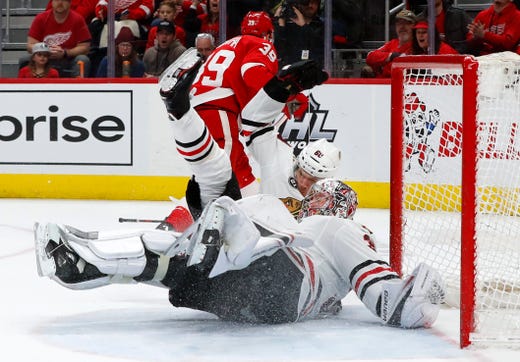 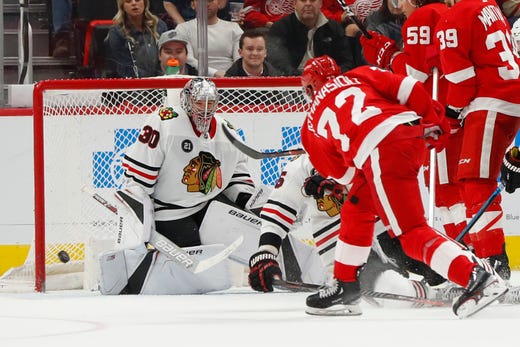 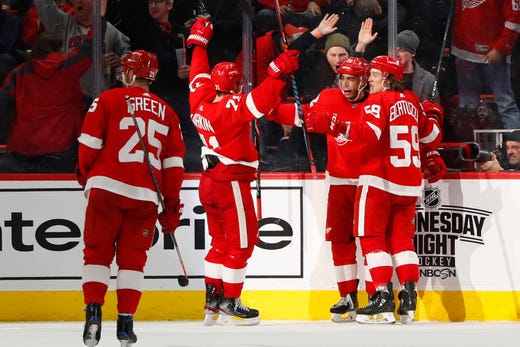 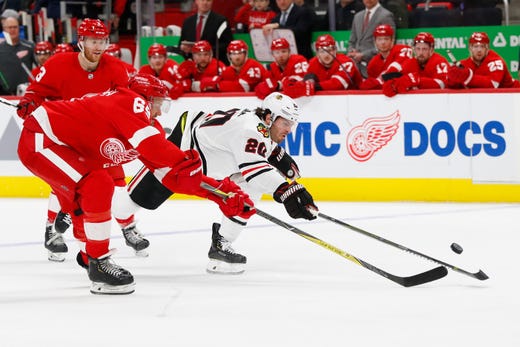 Goaltender Jimmy Howard, who was honored in pregame ceremonies for playing in game No. 500 in his career last week, will not remember game No. 503.

Howard was lifted in the second period for Jonathan Bernier — the third consecutive game both goalies have played — after Howard allowed four goals on eight shots.

“Sometimes it’s just not your night,” Blashill said of Howard’s evening. ‘It doesn’t mean it’s on Jimmy. Sometimes it’s not your night, it’s just one of those things. I didn’t think we responded to it (the switch), we weren’t good enough the rest of the second (period).”
The fourth goal against Howard was scored by Kane, who scored his 37th goal off a 2-on-1 rush at 1:17 of the second period, giving the Blackhawks a 4-1 lead.

A bright spot, as it’s usually been this season, was Larkin.

Larkin scored two goals, including his 26th at 4:19 of the third period, cutting the lead to 4-2. Larkin converted a centering feed from Trevor Daley while coming up the slot, and beat goalie Cam Ward.

Then Athanasiou cut the lead to 4-3, at 5:23, with his 21st goal, on the power play, tucking a rebound past the end board off Ward.

“It went off his back, or his head,” Athanasiou said.

DeBrincat made it 3-1 toward the end of the first period, his 33rd goal, an impressive shot from near the hashmarks.

“I’ve known him for a while,” Larkin said of DeBrincat after the morning skate. “He just seems to find a way to score. He came in here last year and had a hat trick. He’s another guy that, like Patrick Kane, doesn’t need a lot of time. He doesn’t need to be flying around.

“He’ll be pretty quiet and then make you pay.”