As Hronek finishes this season, there’s a growing sense the former second-round draft pick is a player the Red Wings can build around. 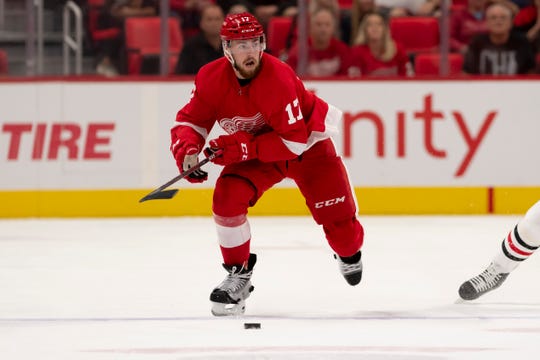 Filip Hronek creates a lot of offense — for the team he plays on, and the one he plays against.

That seemed to be message about the young defenseman when Hronek was drafted by the Red Wings in 2016, and during his early pro career.

But you don’t here that critique as much anymore.

As Hronek finishes this season, there’s a growing sense the former second-round draft pick is a player the Red Wings can build around.

“With every game, I’m getting more comfortable,” said Hronek, before the Wings went on this five-game road trip. “I feel comfortable on the ice, in the locker room. It’s easier (now) than start of the season.”

Heading into Monday night’s game in San Jose, Hronek had played in 39 games with 16 points (13 assists) and a minus-11 rating. He’s logged at least 23 minutes of ice time in nine of his last 10 games.

Hronek, 21, unexpectedly, began the season with the Wings on defense, along with Joe Hicketts, Libor Sulak and Dennis Cholowski. That’s when Mike Green, Trevor Daley, Jonathan Ericsson and Danny DeKeyser were all injured, and the Wings had to temporarily rush their younger prospects.

The results went about as expected, as the young defensemen struggled.

Hronek had flashes of NHL readiness — but mostly not.

After being sent down to Grand Rapids, Hronek didn’t sulk. He took on increased responsibility and the Griffins played him on the penalty kill. Hronek worked on his defense, and his offensive game was as sharp as ever.

Hronek was recalled in mid-December after another spate of injuries to the defense, and you could sense his confidence was growing.

A short return to Grand Rapids during the NHL All-Star break and the Wings’ bye weeks gave Hronek another opportunity to dominate.

Since being recalled in mid-February – with Cholowski being returned to Grand Rapids – Hronek has looked every bit an NHL defenseman here to stay.

“He’s proving himself, and looks for sure a top-four defenseman in this league — and that’s great for our organization.”

Playing often with Danny DeKeyser, Hronek has seen time on both special teams while playing against other teams’ top lines.

Hronek has embraced the challenge and responsibility and looks increasingly capable of handling the increased role compared to October.

“The best defensemen in the world, they create offense without giving up a whole bunch,” Blashill said. “My message to Fil has been (Calgary defenseman) Mark Giordano is that guy you can look at as a guy Fil can be real similar in terms of creating a lot of offense and be hard to play against, be very good defensively. Mark is having a heck of a year in Calgary and you win a lot of games when guys play like that.

“We want Fil in the play and rush and manage his game and he’s done a much better job of that from the beginning of the year. He didn’t always at the start of the year and that’s why he went back down.

“But since he’s been back up, he’s done a much better job of it.”

Ericsson missed five games after suffering a leg injury March 12 in Montreal. McIlrath was recalled from Grand Rapids Sunday, while Libor Sulak (flu) was returned to the Griffins.

McIlrath, 26, in 49 games with Grand Rapids had nine points (eight assists) and a plus-12 rating. McIlrath was a 2010 first-round draft pick of the New York Rangers.

Blashill said forward Thomas Vanek was out Monday because of a “middle-body” injury.