After nursing a neck injury late in the regular season, Dylan Larkin may use the time off this spring to prepare for training camp. 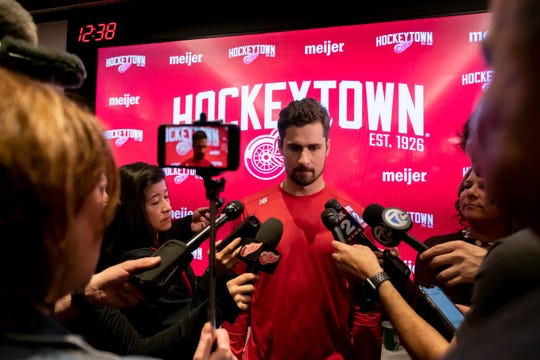 Detroit — Jeff Blashill is going back to the world championships. Dylan Larkin, though, is unsure.

Blashill was named head coach for Team USA at the upcoming men’s world championship for the third consecutive year.

The tournament, this year in Slovakia, begins May 10 and concludes with the gold medal game on May 26.

“It’s terrific to have Jeff back coaching our national team,” said Chris Drury, general manager of Team USA.  “He’s an excellent leader and is well-versed on what it takes to be successful on the international stage.

“We’re also fortunate to have a terrific group of assistant coaches and support staff that will represent us well in our ultimate goal of bringing the gold medal home to the United States.”

Dan Bylsma, Blashill’s assistant with the Wings, will join Blashill on the Team USA staff again this season — both were with Team USA last year.

Whether Blashill gets to coach Larkin again on Team USA is unclear.

Larkin has played at the world championships the last two springs and, especially this past season, carried a successful tournament into the regular season.

But after nursing a neck injury late this season, Larkin may use the time off this spring to prepare for training camp.

“I’m not certain right now,” Larkin said regarding the world championships. “I’ve had a couple of injuries, especially late in the season. I want to go and keep playing hockey, but I have to look after my body first.

“I have to make sure I’m ready for next year.”

Goaltender Jimmy Howard, defenseman Danny DeKeyser and forwards Luke Glendening and Justin Abdelkader have all played for Blashill on Team USA, but Blashill wouldn’t speculate as to who might be on the national roster this year.

General manager Ken Holland will attend the NHL draft lottery Tuesday night and reiterated wherever the Wings pick, they’ll get a “real good player” at the Entry Draft in June.

The Wings have the fourth-best odds (9.5 percent) of picking No. 1 overall, but could wind up anywhere from first to seventh depending on how the ping pong balls come out.

“Wherever we pick, from one to seven, this franchise is getting a real good player,” said Holland, adding he was excited about the three second-round picks the Wings also possess. “The focus will be on the top end of the draft and getting, maybe, a superstar player. We hope it’ll be a superstar player, and hopefully we’ll get lucky in the lottery.

“But we’re getting another good player.”

Much attention has been focused on forward Jack Hughes, the likely No. 1 overall pick, out of the Plymouth Township-based USA National Development Program.

Larkin feels Hughes will eventually have success in the NHL.

“I know he’s a real nice guy, he’s pretty young and seems very humbled by the whole experience he’s going through,” Larkin said. “It’s nothing like I went through at that age. He’s handed it real well. He has a great family and he’s an impact player.

“He’s a guy who will come in and make plays and he’s going to do it for a long time in this league. He would change a franchise the moment the lottery comes out (Tuesday).”

Defenseman Niklas Kronwall will decide his playing future in the upcoming weeks.

Kronwall, 38, will take some time, clear his emotions from this season, and decide if he wants to put in the time and effort this summer to come back for another season.

“I’m going to take my time now, sit down with the family, and just kind of let time play itself out over the next few weeks or months, or whatever it might be,” Kronwall said. “Right now, you’re just kind of in the middle of everything and caught up in it.”

Holland was clear he feels Kronwall can play another season — and would like to have him on the roster — if Kronwall wants to play.

“He’s a pro, you need pros in the locker room,” Holland said. “He’s a voice, and when he talks they listen. He does it right. He’s 38, he’s not Niklas Kronwall of 10 years ago that can play 25 minutes. But could he be on the third pair and play 18-20 minutes and mentor somebody on that third pair and when there’s an injury play more minutes?

“He knows how to survive and play the game. They (veterans) don’t have to chase the game. I thought he had a real good season.”

"It sucks not getting ready for the playoffs," Jeff Blashill said as the team cleaned out its lockers on Monday. The Detroit News

The writing on the wall appears to be that Larkin will be named captain at some point in the future, maybe even before next season.

But Holland and Blashill wouldn’t commit to anything Monday.

“Maybe,” said Holland, when asked if the organization will name a captain next season. “Probably, probably.”

Larkin, Kronwall, Abdelkader and Frans Nielsen were assistant captains this season, after the retirement of Henrik Zetterberg in training camp.

Holland said signing an unrestricted free agent this summer could also change plans as far as naming a captain.

But Larkin remains a likely candidate.

“The reality is, obviously, we made Dylan an (assistant captain) and as we work our way through the summer and into training camp, certainly he’s a legitimate candidate,” Holland said. “He plays hard and has gone through the four years and developed into a tremendous player.

“He’s going to be a the face of this franchise. He’s a leading candidate, but I’m not prepared to have an announcement today.”

Said Larkin: “I’m not worried about it. I’m just worried about coming back and trying to turn this around. There’s leadership in this room. We talk about that a lot. There are a bunch of guys who could be wearing the ‘C.’”

Forward Jacob de la Rose had a procedure to correct an accelerated heartbeat that resurfaced during the March 19 game against the New York Rangers and caused him to miss the remainder of the season.

The same condition surfaced during training camp this season when de la Rose was with the Montreal Canadiens and caused him to miss some time.

“It was a tough start and a tough ending for the year, with the same thing happening twice,” said de la Rose, who the Wings acquired on waivers early in the season. “But I’m happy with the way I got settled in here and it’s a great group of guys. It feels like we’re trying to build something here.”

“It’s nice to know what is going on and you don’t have to worry about it anymore,” he said. “I’m happy I got it done.”

"I hope it's a reminder of how hard it is and how hard you have to work every day," Niklas Kronwall said. The Detroit News

Forward Michael Rasmussen had a rough first year in the NHL, but Blashill feels it will help the young player going forward.

Rasmussen, who’ll be 20 on April 17, played 62 games this season with eight goals and 10 assists.

Because he had junior hockey eligibility remaining, Rasmussen could only play in the NHL or junior and wasn’t eligible to play minor pro in Grand Rapids.

The Wings decided to keep Rasmussen in the NHL and it was a difficult baptism at times.

“Long term in the NHL, he’s going to score goals because he does one thing extremely well and that’s he goes to the net. He’s a very good net-front guy,” Blashill said. “That’s one of the ways you can score goals in this league.

“What this has done for Michael — it’s been real difficult at times and it’s been hard on him mentally, but in the end it’ll make him better and it’s helped him understand what he has to work at today to be a better player tomorrow.”

Forward Taro Hirose (Michigan State) made a nice impact in a 10-game stint at the end of the season, after being signed as an undrafted college free agent.

“He did a real good job when he first got here,” Blashill said. “The last couple of games, it wasn’t as good as the first few. One of the things he has at his disposal is he’s able to create plays. He’s like everybody else. He’s going to have to get stronger and quicker. He’s got a confidence to him and he looks like a guy who can help you win.”

Blashill said he doesn’t expect changes on his coaching staff.

…Forward Thomas Vanek said he will wait until the summer to see if he plays another year or decides to retire.

…Blashill said special teams are an area the Wings need to improve on next season. The Wings finished 19th on the power play (18.1 percent) and 28th on the penalty kill (77.1 percent).