Sunday's NHL playoffs: Blues one win away from first Stanley Cup Final since 1970

The Blues will have a chance to seal the trip on Tuesday at Enterprise Center.

Sunday's NHL playoffs: Blues one win away from first Stanley Cup Final since 1970

San Jose, Calif. — The Blues are one win away from their first trip to the Stanley Cup Final since 1970 after a dominating 5-0 win over the Sharks in Game 5 of the Western Conference final on Sunday at SAP Center.

The Blues will have a chance to seal the trip on Tuesday at Enterprise Center.

“It’s always hard against a real good team like San Jose,” coach Craig Berube said. “It’s going to be hard. We are going to be at our best for 60 minutes for sure.”

“We’re in a good situation right now,” forward Pat Maroon said. “We’ve got to stick with it, though. That team’s relentless over there. They’re a good hockey team, and they’ve got some really good players over there that want it just as bad as us. So we’ve got to find ways to battle hard and do what we’re capable of doing, which is just dictating the play, playing our style of hockey, staying the course, staying out of the stuff and just finding ways to just play them down low, cycle them down low, wear them down and just get to our game, like I said.

"But exciting times right now, and just got to find ways to get over this win and get ready for Game 6.”

Jordan Binnington recorded his first postseason shutout, stopping all 21 shots he faced, more than half of which came in the first period. The Blues outshot San Jose 40-21, with 36 of those shots coming in the second and third periods.

The Blues broke the game open in the second period, when they outshot San Jose 20-6 and got a goal from Jaden Schwartz and then the first successful postseason penalty shot in team history, by Vladimir Tarasenko. Oskar Sundqvist got the scoring started in the first period and Schwartz added his second goal of the game early in the fourth during a five-on-three power play and completed his second hat trick of the postseason when he knocked in a pass from Tarasenko with 3:58 to go. It’s the 12th goal of the postseason for Schwartz, the second most in team history, behind Brett Hull’s 13 in 1991. It also means Schwartz has scored more goals in the postseason, 12 in 18 games, than he had in the regular season, 11.

There was one hat on the ice in celebration of Schwartz’s feat.

“We’ve seen it before from (Schwartz),” Berube said. “He’s been a pretty consistent performer over the years. It was an off year for him obviously in the regular season but the guy keeps working hard. Nothing changes with his attitude. He keeps with it and keeps working and it’s paying off now. He’s been a very good performer for us in the playoffs.”

By the end of the game, the Sharks had four players in the dressing room with injuries and two more who had been kicked out of the game after Micheal Haley went on to the ice, apparently for the sole purpose of going after Alex Pietrangelo, and Evander Kane, who got a 10-minute misconduct with 2:47 to go.

“We stuck to our game,” defenseman Joel Edmundson said. “We knew they were going to come out hard. They had a good first period, we weathered the storm. I thought our second period and third period were really good. We just played tonight, good defensively, didn’t spend much time in our D zone. I thought we played a full 200-foot game.”

Tarasenko was tripped from behind by Brent Burns with 13:07 to go in the second and on the ensuing shot, he started by going wide to his right, then came back and shot high to goalie Martin Jones’ glove side — a spot the Blues have been taking aim at all series — to score.

It was only the second postseason penalty shot for the Blues, the other coming by Jimmy Roberts in 1968 against Minnesota and Cesare Maniago. It was unsuccessful. In the regular season, Tarasenko had four penalty shots in shootouts. He was 0 for 4.

The Blues outshot San Jose 20-6 in the period and had plenty more scoring chances as it looked like they would extend the lead further, but they couldn’t. 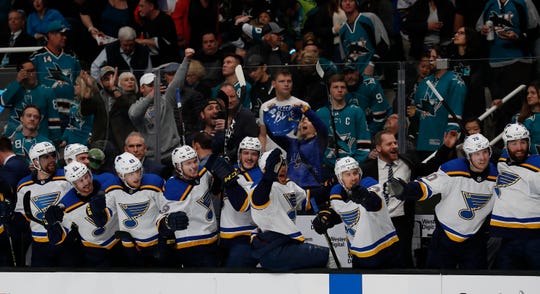 Jaden Schwartz extended the lead to 2-0 on a goal 3:05 into the period. Tarasenko took a shot from the left that deflected off San Jose’s Logan Couture. The puck still went through to Jones, who swatted it away, but right to Schwartz, who had an open corner of the net to shoot into for his 10th goal of the postseason.

The Blues had a four-minute power play later in the second when Alexander Steen took a high stick, but it was soon cut in half when Tyler Bozak was called for hooking. The Blues killed the four-on-four — San Jose has been dominant on those in this series — and didn’t manage much in the remainder of the power play.

Oskar Sundqvist kept the fourth line’s hot streak going with a goal to put the Blues up 1-0 after the first period. The fourth line — Sundqvist, Ivan Barbashev and Alexander Steen — have goals in four consecutive games.

The Sharks had most of the early chances — though each team had a shot hit the post in the first four minutes. Evander Kane of San Jose hit the post just 12 seconds into the game, and Brayden Schenn hit one about four minutes in.

It was the Blues that got the first goal. The Blues could have had more chances, but a few scoring plays ended with an extra pass rather than a shot.

Erik Karlsson, whose status for the game was up in the air, played a puck from behind his net up ice. Teammate Brenden Dillon spread his legs to let the puck go through and off the boards, but if the pass was intended for someone else, there was no one there. Sundqvist skated onto it and blasted a shot past Martin Jones for his fourth goal of the postseason and second of this series.

The Sharks had a power play in the first after Jay Bouwmeester was called for delay of game. San Jose had four shots on goal in the two minutes, but couldn’t score. For the period, the Sharks outshot the Blues 11-4.

The teams come into the game even at two wins apiece.