The Red Wings will have nine games, highlighted by a game Sept. 26 against the Stanley Cup champion St. Louis Blues.

Go through the gallery for our 2019 NHL mock draft, with analysis from Ted Kulfan of The Detroit News. The draft will include top-rated NHL draft prospect Jack Hughes (center) and his teammates Cole Caufield (left) and Trevor Zegras (right) of the USA Hockey National Team Development Program. John T. Greilick, Detroit News
Fullscreen 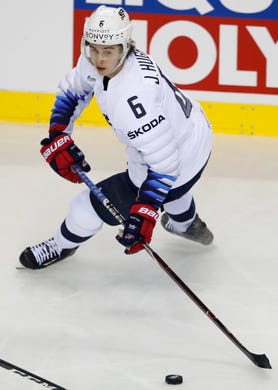 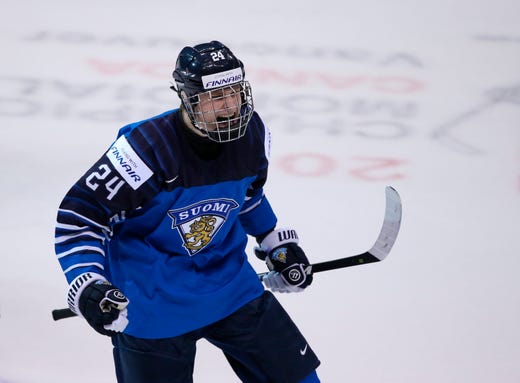 2. New York Rangers: Kaapo Kakko, TPS-Liiga (Finland), right wing. Kakko is probably more NHL ready, currently, than Hughes. Kaapo was excellent at the world championships, and his trajectory going forward is just as great as Hughes’. The Rangers will not be disappointed. Chris Barry, Sputnik via Associated Press
Fullscreen 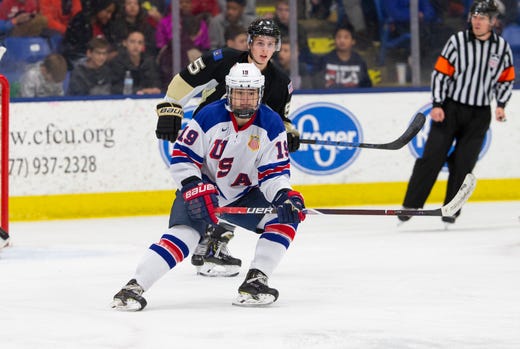 4. Colorado Avalanche: Dylan Cozens, Lethbridge (WHL), center. The Avalanche need more organizational depth up the middle, and Cozens is the type of big, playmaking center who could someday thrive with the Avalanche. Western Hockey League
Fullscreen 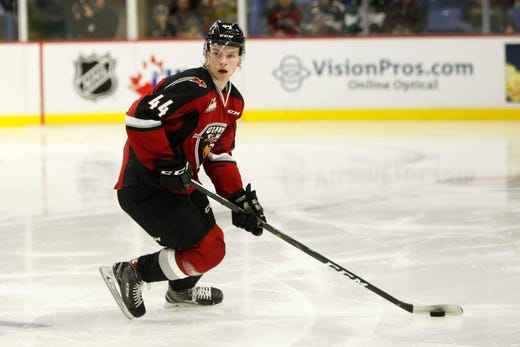 5. Los Angeles Kings: Bowen Byram, Vancouver (WHL), defenseman. The Kings need scoring, but Byram is just too good to pass up. Byram is the premier defenseman in this class, and the Kings need help at every position. Western Hockey League
Fullscreen 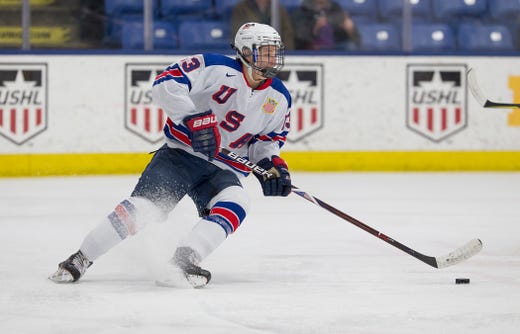 6. Detroit Red Wings: Trevor Zegras, USNTDP, center. The Wings can go in several directions, but Zegras appears to have the most intriguing potential. With Dylan Larkin, Joe Veleno and Zegras, that’s a lot of talent some day at a crucial spot. Rena Laverty, For USA Hockey National Team Development Program
Fullscreen 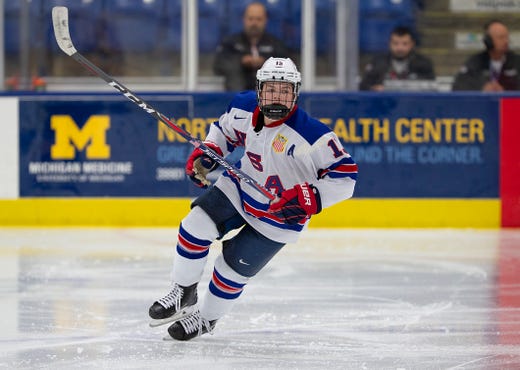 7. Buffalo Sabres: Cole Caufield, USNTDP, right wing. He’s only 5-foot-7, 163 pounds, but he understands how to score goals. Does he ever. Caufield would be an excellent fit with Jack Eichel and Casey Mittelstadt on the Sabres. Rena Laverty, For USA Hockey National Team Development Program
Fullscreen 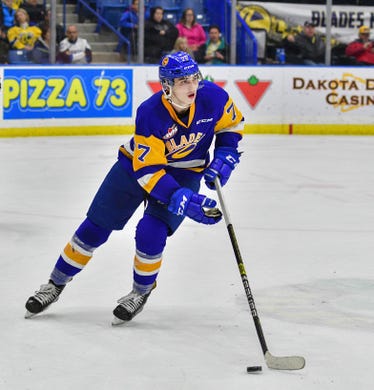 8. Edmonton Oilers: Kirby Dach, Saskatoon (WHL), center. Who knows, Dach could easily be snapped up a pick or two earlier, but if he falls to the Oilers, GM Ken Holland will be pleased. At 6-foot-4, Dach is an elite passer and playmaker and should complement Connor McDavid. Steve Hiscock, Saskatoon Blades Hockey Club,
Fullscreen 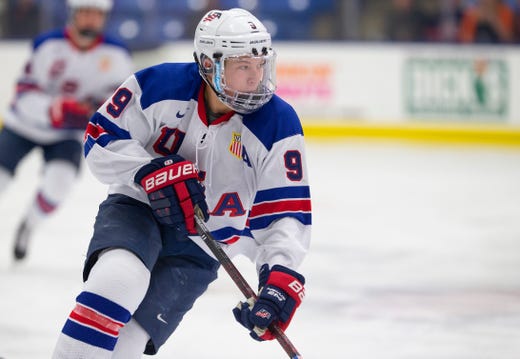 9. Anaheim Ducks: Matthew Boldy, USNTDP, left wing. The Ducks need to beef up their organizational depth up front, and Boldy is a player some scouts feel should be rated high. It might not take long to see Boldy in the NHL. Rena Laverty, For USA Hockey National Team Development Program
Fullscreen 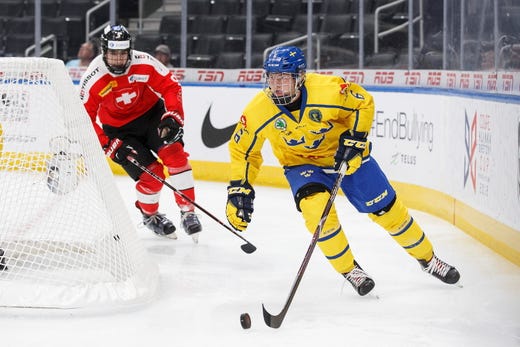 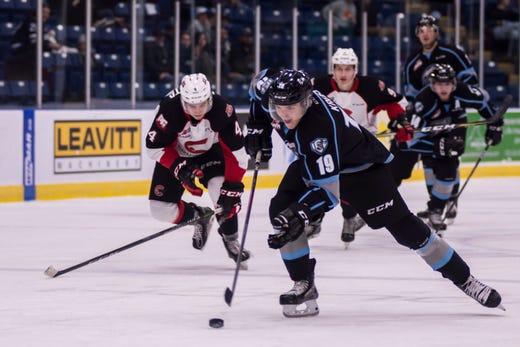 11. Philadelphia Flyers: Peyton Krebs, Kootenay (WHL), center. Krebs tore his Achilles tendon in the last couple of weeks, which could scare teams away. If the Flyers show faith, they’ll have a top 10-caliber talent who has excelled while playing on a losing junior team. Western Hockey League
Fullscreen

12. Minnesota Wild: Arthur Kaliyev, Hamilton (OHL), right wing. A pure scorer, Kaliyev tallied 51 goals this season and has one of the best shots in this draft. But scouts aren’t sure the rest of Kaliyev’s game, right now at least, matches his offensive potential. Brandon Taylor, OHL Images
Fullscreen 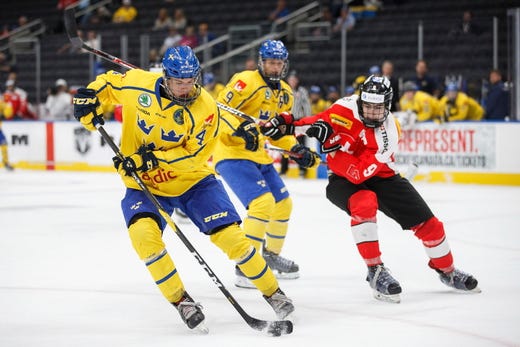 13. Florida Panthers: Philip Broberg, AIK (Sweden), defenseman. Some scouts love Broberg, others aren’t as keen, but he’ll wind up somewhere in the middle of this draft. At 6-foot-3, Broberg has the size and skating ability that teams desire nowadays, but Broberg’s performance dropped beginning in the world junior tournament. Codie McLachlan, Associated Press
Fullscreen 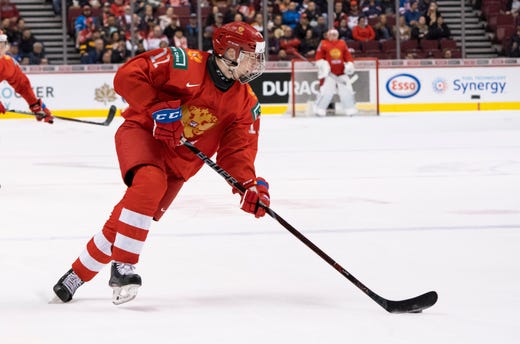 14. Arizona Coyotes: Vasili Podkolzin SKA (Russia), right wing. Interesting player. Podkolzin has top-5 talent, and plays with a lot of passion and doesn’t mind physical stuff. But Podkolzin is committed to the KHL for two years, so an organization willing to wait will be the one that takes the chance on him. Rich Lam, Getty Images
Fullscreen 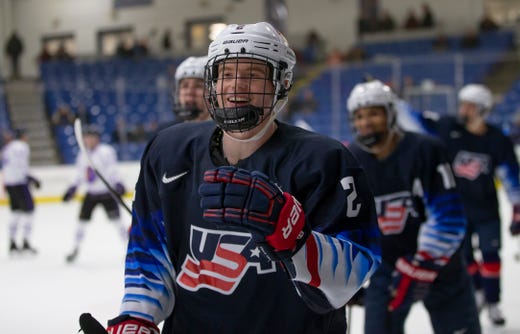 15. Montreal Canadiens: Cam York, USNTP, defenseman. The Canadiens will need to get younger on defense soon, and York fills the need here, with his puck-moving ability. York had 51 assists in 63 games last season, and has committed to Michigan. Rena Laverty, For USA Hockey National Team Development Program
Fullscreen 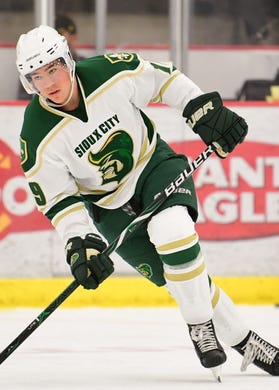 16. Colorado Avalanche: Bobby Brink, Sioux City (USHL), right wing. Some scouts are nervous about Brink’s skating, but there’s no questioning his goal-scoring ability (35 goals in 43 games) and his know-how on the ice. Brink is the type of player who could be a surprise of this draft. Jim Utterback, Bryce Griffin, Hickling Images
Fullscreen 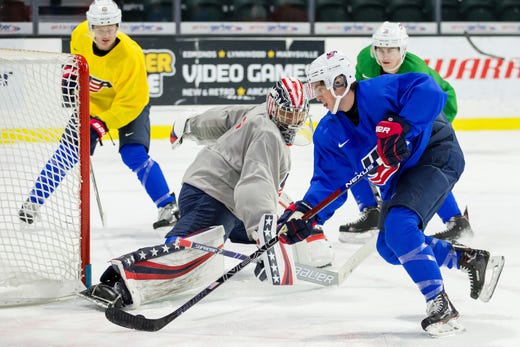 17. Vegas Golden Knights: Spencer Knight, USNTDP, goaltender. It’s not often a goalie gets picked this high in the draft, but Knight is just too good to pass on. Scouts rave about his poise and athleticism; plus, he’s an effective puck-handler, too. Christopher Mast, Associated Press
Fullscreen 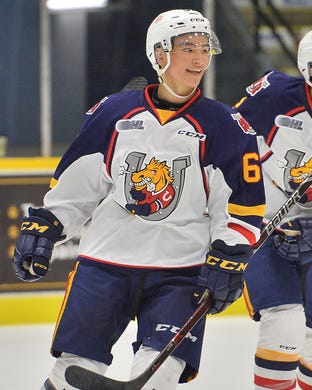 18. Dallas Stars: Ryan Suzuki, Barrie (OHL), center. Montreal has his brother Nick, so don’t be shocked if the Canadiens grab Ryan, too. But Ryan isn’t going to far too far down given his 75 points (in 65 games) last season. More of a playmaker than a goal-scorer. Terry Wilson, OHL Images
Fullscreen 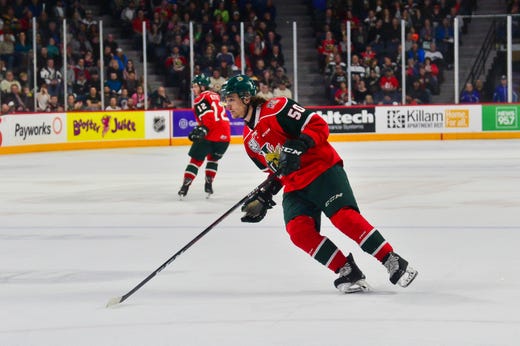 19. Ottawa Senators: Raphael Lavoie, Halifax (QMJHL), right wing. Lavoie was trending toward the bottom of the first round much of the season and spring, and then he had a tremendous playoff season to boost his stock considerably. A 6-foot-4 potential power forward who needs to stay engaged (think Anthony Mantha). David Chan, Halifax Mooseheads
Fullscreen 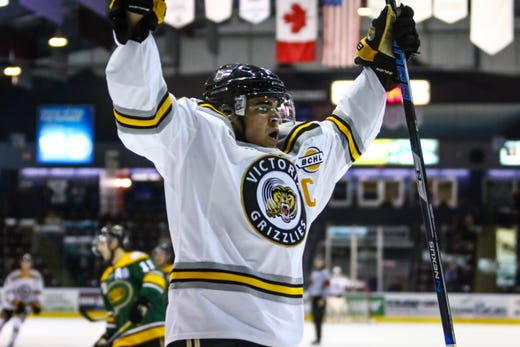 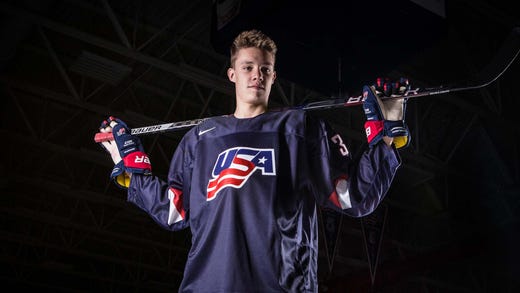 21. Pittsburgh Penguins: Alex Vlasic, USNTDP, defenseman. This would be a good, safe pick for the Penguins, who’ll need to restock their defense soon. Vlasic is 6-foot-6, mobile, and is a good penalty killer. He’s another surefire NHL player out of the USNTDP. Rena Laverty, For USA Hockey National Team Development Program
Fullscreen 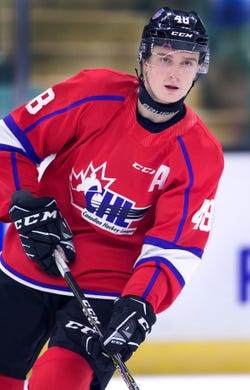 22. Los Angeles Kings: Thomas Harley, Mississauga (OHL), defenseman. The Kings need young talent up front, but Harley would be difficult to pass on this late in the draft. At 6-foot-3, 183 pounds, Harley will fill out physically, and his performance progressed as the season went on. Larry MacDougal, Associated Press
Fullscreen 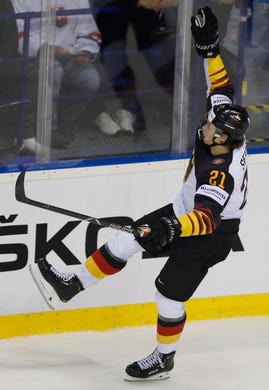 23. New York Islanders: Moritz Seider, Mannheim (Germany), defenseman. There aren’t many German players who get drafted in the first round, but Seider appears headed to be. He played pro as an 18-year-old and didn’t look out of place. At 6-foot-4, 198 pounds, he has a frame that will get bigger and stronger. Petr David Josek, Associated Press
Fullscreen 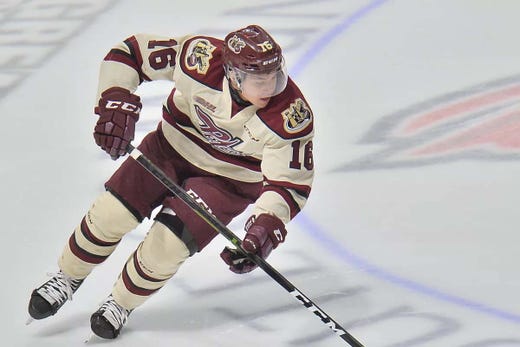 24. Nashville Predators: Nicholas Robertson, Peterborough (OHL), left wing. Robertson’s size (5-foot-9, 168 pounds) and skating give some scouts pause, but Robertson was a point-a-game player (27 goals, 55 points in 54 games) and was impressive in the playoffs. There were similar questions with his brother Jason, who has earned a spot in Dallas’ lineup. Terry Wilson, OHL Images
Fullscreen

25. Washington Capitals: Nils Hoglander, Rogle (Sweden), left wing. Another smaller player (5-foot-9 185 pounds) who ultimately will find a role in a talented lineup. Scouts still aren’t convinced whether Hoglander is more of an offensive player, or a third- or fourth-line type of player. Andreas Ljunggren
Fullscreen 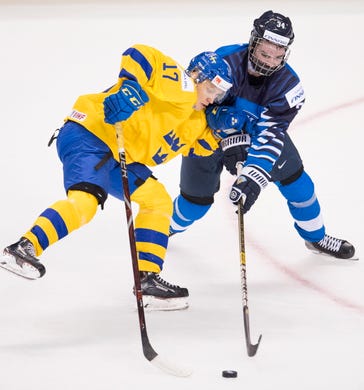 26. Calgary Flames: Ville Heinola, Lukko (Finland), defenseman. The Flames are deep on defense, but might have to move some bodies ultimately. Heinola gives them insurance down the line -- a player who doesn’t make many mistakes, has a growing offensive game, a good skater. Jonathan Hayward, Associated Press
Fullscreen 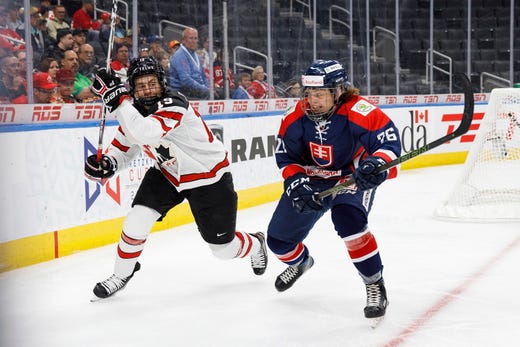 28. Carolina Hurricanes: Connor McMichael, London (OHL), center. Coming from a good organization like London, McMichael had 72 points (36 goals) in 67 games and would be a great pick this late in the first round. McMichael isn’t big (6-foot, 170 pounds), but really quick and knows where the scoring areas are on the ice. Twitter: @con91mcmichael
Fullscreen

29. Anaheim Ducks: Brayden Tracey, Moose Jaw (WHL), left wing. At 6-foot, 168 pounds Tracey is far from a finished product, but his rookie junior season was quite impressive (81 points in 66 games). He’s a little bit of a late-bloomer who had the luxury of playing on a veteran team. Next season, Tracey will have to be a leader on and off the ice. Twitter: @brayden_tracey
Fullscreen

31. Buffalo Sabres: Philip Tomasino, Niagara (OHL), center. Many lists have Tomasino going a bit higher, so if the Sabres draft him here, it has a chance to be a steal. He’ll turn 18 in July, so he’s young, maturing and has shown offensive ability (72 points in 67 games) already in young career. Terry Wilson, OHL Images
Fullscreen

Detroit — The Red Wings will face their usual slate of familiar, longtime rivals during the preseason, which was released Tuesday.

The Wings will have nine games, highlighted by a game Sept. 26 against the Stanley Cup champion St. Louis Blues.

The game will be played in the village of Calumet in the Upper Peninsula, as part of Calumet winning the Krafty Hockeyville contest.

The Wings will begin the preseason schedule Sept. 17 against Chicago at Little Caesars Arena.