The Detroit Red Wings take another big step forward in their rebuilding efforts on Friday night with the No. 6 pick in the NHL Draft.

John Niyo and Ted Kulfan preview the NHL Draft with TSN director of scouting Craig Button and John Wroblewski, the coach of the USNTDP U-18 team. The Detroit News

The Detroit Red Wings take another big step forward in their rebuilding efforts on Friday night with the No. 6 pick in the NHL Draft. You can follow all of the picks, news and developments with live updates from Nolan Bianchi of The Detroit News.

Despite recent whispers that Kaapo Kakko had been closing in on Hughes for the No. 1-overall selection in this year's draft, the Devils didn't deviate from the draft's consensus best player when it came time to make the official call.

The Orlando-born center is the eighth American to be taken first overall and the brother of former Michigan Wolverine Quinn Hughes, who was taken seventh in the 2018 draft. 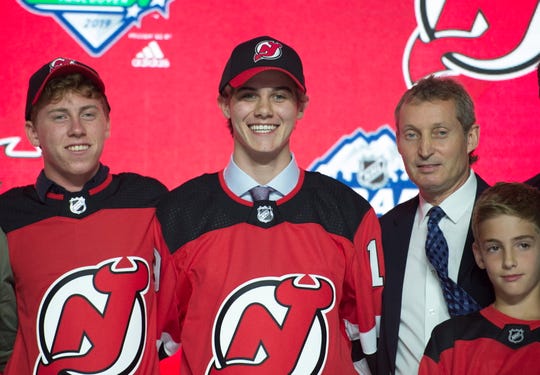 With Hughes off the board, the Rangers' decision to draft Kakko will be the easiest choice made by any team tonight. The Finnish LIIGA Rookie of the Year tallied 38 points in 45 games for TPS; his hockey IQ and physicality make him a great consolation prize (if you can even call him that).

Dach might need a year or two to develop before he becomes an NHL-caliber player, but with a 6-4 frame at just 18 years old, his combination of size, speed and ability should put him on the fast track to earning a spot with Chicago.

And the draft's first defenseman has come off the board. Byram's skating ability and puck-handling skills make him a valuable asset in every zone and his knack for taking away passing lanes has drawn comparisons to the game of Chicago All-Star Duncan Keith.

Turcotte becomes the second American to come off the board, joining USNTDP roommate Hughes as a top-5 pick. Turcotte, who racked up 62 points in 37 games during his last season with the Plymouth-based club, is currently committed to the University of Wisconsin.

Well, this comes as quite a surprise. After Byram, the run at defensemen wasn't expected until a few picks down the road, but Steve Yzerman gets aggressive with his first selection at general manager and makes Seider the first German-born defenseman to be drafted in the first round.

Detroit with the first stunner: Take Moritz Seider with the No. 6 pick. There was an audible gasp in the crowd.

At 6-4, 207, Yzerman told NBCSN's Kathryn Tappen about Seider, "Ultimately what we liked is a big defenseman who can skate, who has excellent hockey sense."

Even Seider was caught off guard by the selection.

A bonafide two-way player, Cozens becomes the first player drafted from Canada's Yukon Territory. His size and physical force will mix in nicely with Buffalo's rising crop of young talent.

Old friend of the Motor City Ken Holland makes his first selection as president of hockey operations with Edmonton, following the defensive-minded selection of his replacement in Detroit by selecting an elite-skating defenseman of his own.

Podzolzin has a knack for getting the puck near the front of the net, and at 6-1, 185, is an absolute force to be reckoned with when he picks up a full head of steam.

We have our first trade. Arizona moves up to No. 11 in exchange for the 14th and 45th pick.

With it, the Coyotes select the draft's fourth defenseman, grabbing the two-way blue-liner as a possible top partner for Jakob Chychrun.

That makes it a record-breaking night for the NDTP, as Boldy, a Boston College commit, goes 12th overall.

Knight is arguably the most NHL-ready goaltender in this year's draft, and it'd be a surprise to see him spend any longer than one season with Boston College before competing for a job in the national league.

Make it three in a row and six total players drafted from the USNDTP. York, a Michigan commit, has above average vision coming out of his own zone and excellent spacing in the defensive end.

Friendly reminder that Cole Caufield is still on the board.

Looks like I jinxed it. Nonetheless, Montreal gets high value for Caufield, a projected top-10 pick.

The Wisconsin commit scored 72 goals in 64 games last season, and despite a 5-7 stature, has been pegged as the best goal scorer in this year's draft.

With its second pick of the first round, Colorado grabs a goal-scorer to compliment the pick of Byram. Newhook scored 102 points with the Victoria Grizzlies a year ago, 18 more than the next closest player.

A torn achilles probably cost Krebs anywhere from six to eight draft positions, but he ends up in a pretty nice situation with a playoff contender regardless.

Thomson is the second consecutive defenseman to come off the board. His poise while breaking out of the defensive zone is his biggest asset and his ceiling projects as a top-4 puck-moving defenseman.

With back-to-back Fins taking us into the 20s, consider the 2019 NHL Draft as Finland putting the international hockey community on watch. The former World Junior gold medalist doesn't have a ton of star power attached to his game, but he's a reliable, smart player that'll have the chance to be an important player on Winnipeg's blue line.

Poulin will probably require another season or two in juniors before trying his hand at making Pittsburgh's roster, but with an extremely high offensive upside, makes him worth a late first-round selection.

Bjornfot is the third Swedish defenseman to be drafted in the first round thus far. Los Angeles' quest to find "grit and sandpaper" players continues.

This pick will be deemed as a bit of a stretch — for reference, TSN's Bob McKenzie had Holmstrom slated to be taken in the 40s — but Holmstrom has goal-scoring tools that fit in well with the philosophy Lou Lamoriello is building in Long Island.

Tomasino's elusive speed makes him an intriguing player in today's game. Still just 17 years old, he'll have a little bit of time to form other tools around the focal point of his talent.

McMichael is the ultimate utility man and an on-the-rise producer. He made a 56-point improvement between his first and second juniors seasons, putting up 36 goals and 36 assists for the OHL's London Knights last year.

Pelletier's 89-point season in Moncton is all the proof anybody should need that the Canadian-born winger can produce on offense, but at 5-9, 161, Pelletier's size makes him a risky first-round selection.

If only there was a recent example of a pure-scoring, undersized forward finding success in Calgary...

Foote is a great finisher with a knack for getting open around the net. His speed could use some improvement, but with Tampa Bay's loaded forward depth, Foote will likely have all the time he needs to develop into the player the Lightning want.

Suzuki is a playmaking center with great hockey sense and puck-handling ability. Suzuki was widely projected as a top-10 pick prior to his most recent season with Barrie, but his lack of competitive edge and reluctance to play inside forced him to nearly slip out of the first round.

Tracey's development from Triple-A Bantam to juniors earned him an impressive rise amongst pre-draft rankings. With a changing of the guard in Anaheim's front end already underway, Tracey becomes the second forward drafted by the Ducks tonight.

Make it eight USNDTP players to be taken in the first round of tonight's draft. Like Tracey and Zegras in Anaheim, Beecher is a pick that won't be expected to make an immediate impact, but will instead have some time to grow as David Krejci and Patrice Bergeron finish their careers at center.

The first round of the NHL Draft has been bookended by American players, bringing the total amount to nine. Johnson is the only one who didn't play for the USNDTP, though, instead playing his most recent season with the Minnesota Golden Gophers.

Red Wings could have their pick from this magnificent seven