There has been no cause of death reported for Johnson, who played for the Wings from 1993-96. 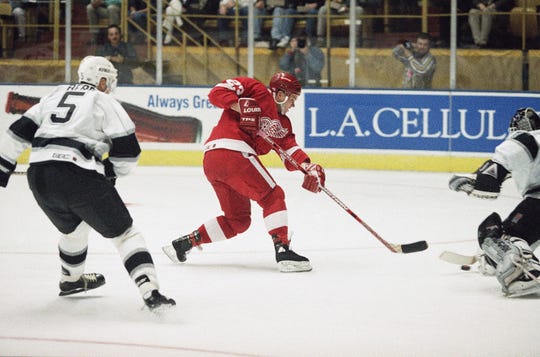 The news was first reported by The Chronicle-Journal, a daily newspaper in Thunder Bay, Ontario, Johnson’s hometown.

There has been no cause of death reported for Johnson, who played for the Wings from 1993-97 before being traded to Pittsburgh.

Johnson was drafted in the second round in 1989 by Philadelphia but never played for the Flyers, who traded him to the Red Wings.

The Wings traded Johnson to Pittsburgh for forward Tomas Sandstrom during the 1996-97 season, months before winning their first of two consecutive Stanley Cups.

Former National Hockey League player and Thunder Bay native Greg Johnson, 48, passed away on Monday in Detroit, according to friends close to the family.

Johnson had his most NHL success in Nashville, where he was chosen in the expansion draft, and played for the Predators fro 1998-2006, serving as the team’s captain the last four seasons.

Johnson returned to the Wings in the summer of 2005, but a training camp physical showed a heart condition that forced him to retire before the start of the regular season.

Johnson was the all-time leading scorer at the University of North Dakota, with 272 points in four years.