Hirose (power play) opened the game’s scoring in the first period, but the Blackhawks responded with two goals in the second period. 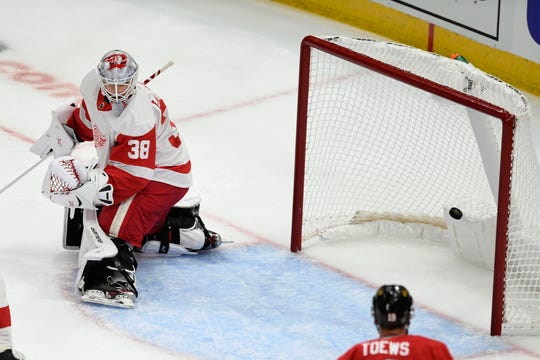 Another day, another exhibition game — get used to it — and this one didn’t go as well for the Red Wings.

Playing the back end of a back-to-back against Chicago, the Red Wings lost, 2-1, at United Center on Wednesday night.

Taro Hirose (power play) opened the game’s scoring in the first period — putting in a rebound off Filip Zadina’s deflected shot — but the Blackhawks responded with two goals in the second period by Brandon Hagel and Duncan Keith and held on.

Here are a few brief observations from Wednesday's exhibition:

►Taro Hirose: The key for Hirose this training camp is produce offense the way he did in his 10-game stint with the Wings after signing from Michigan State.

If he does, Hirose will likely make the roster.

Hirose isn’t the biggest guy in the world by any stretch, and he isn’t the fastest either. So, Hirose has to outsmart opponents, use his instincts, and he did a good job of it in March.

He was in the right spot on Wednesday, getting to a puck that deflected off a Blackhawks defender after Zadina’s shot, and Hirose snapping a shot past Crawford.

Hirose had three shots on net in 20 minutes, 11 seconds of ice time, Zadina had no shots in 20:19 and Joe Veleno had three shots, including a couple quality chances, in 16:39.

►Goaltending: Bernier misplayed the puck behind the net leading to Hagel’s goal, which tied the game in the second period.

Larsson replaced Bernier midway in the second period and was still cold when Keith skated down wing and beat Larsson from the dot.

After allowing that goal, Larsson settled down and made several good saves in the third period with the Blackhawks pressuring.

►Moritz Seider: In his exhibition debut, the rookie defenseman played 23:19, had one shot and was minus-1. Only Mike Green (23:57) played more on defense than Seider, who looked poised going against Chicago’s best players most of the night.