Dylan Larkin won a faceoff in overtime, sprinted down the ice, and fed Bowey for the goal in a 3-2 win against the Penguins.

Dylan Larkin makes his preseason debut in Red Wings' 3-2 overtime victory against the Penguins on Sunday. The Detroit News

Detroit — Dylan Larkin made an impact Sunday, but Madison Bowey’s was even more impressive.

Playing his first game of the preseason, Larkin set up the winning goal — by Bowey, who had three points on the night — in overtime, giving the Red Wings a 3-2 victory over Pittsburgh.

Larkin won a faceoff, sprinted down the ice, and fed Bowey for the winner at 2 minutes, 58 seconds into overtime.

“On the faceoff I told Bowes (Bowey) to take him (centerman) and I’m going to try to jump forward and push the puck to the boards,” Larkin said of the winning goal. “I was lucky I got a piece of it and chipped it and got some speed going. A couple guys came to me and Bowes was in offensive position and in a perfect spot.”

Said Bowey: “Larks did a great job moving the puck up the ice and he drew a couple guys to him in the offensive zone. I was lucky enough to find open ice and he made great play. I just had to finish it up.”

Brian Dumoulin and Jared McCann (power play) had goals for the Penguins.

The Wings continue the exhibition season Monday at the New York Islanders.

Larkin has been idled with a nagging foot injury this exhibition season.

But he returned Sunday and played a team-high 22:57, with two assists, a plus-2 rating, and a team-high four shots (tied with Mantha).

Timing was Larkin’s biggest issue, but it got better as the game went along.

“Pucks on the board, guys coming at you, even though you battle in practice, it’s a lot of moving parts out there,” Larkin said. “It’s just timing and it’ll come. I felt better as the game went on. It was fun to be out there again.”

“It settled down,” Larkin said. “It needed a couple of days and we took that time and after playing a full game, it feels good.”

Blashill felt Larkin got stronger as the night progressed.

“Better and better as the game went along,” Blashill said. “Obviously it was an unreal play at the end. He practices so hard, it doesn’t surprise me he can hit the ground running before not playing much before this game. It was good to have him back out there.”

Madison Bowey had three points and the winning goal in overtime to lead the Wings to victory on Sunday. The Detroit News

Bowey has been known as more of an offensive defenseman thus far in his career, but he’s concentrating on defense this camp.

“The main focus for me right now is to be solid defensively and the past few games have been just that, and it’s giving me an opportunity to jump into the play and help out a little bit more offensively,” Bowey said.

Blashill feels Bowey will benefit from concentrating on defense right now, bringing offense back into his game afterward, and earning the trust of the coaching staff.

“You earn that trust by not giving up a whole bunch and then slowly start to add your offense into your game,” Blashill said.

Blashill likes where the goaltending duo of Bernier and Jimmy Howard are at this point in the preseason.

“Bernie was real sharp and he’s been sharp from day one,” Blashill said. “Howie was super sharp the other night. Both goalies have done a real good job of getting themselves ready and they both look like they’re in a good spot right now.”

Outlook: The Wings and Islanders play for the second time this preseason…The Islanders won Friday, 4-3, in overtime…This is the first of five games this week to close out the preseason for the Wings. 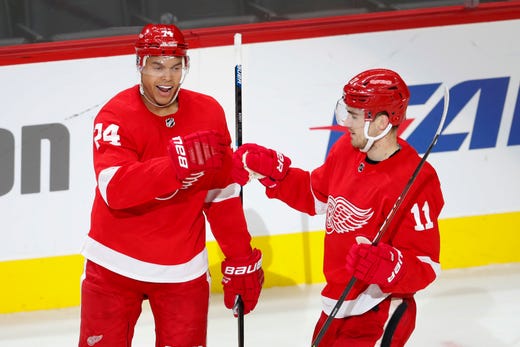 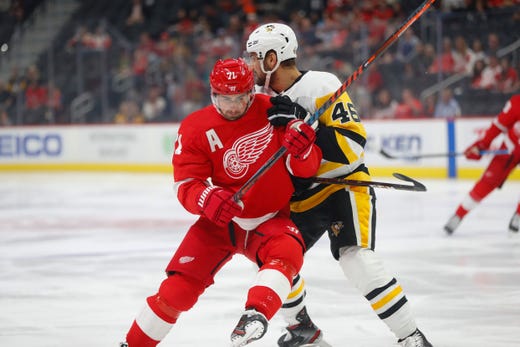 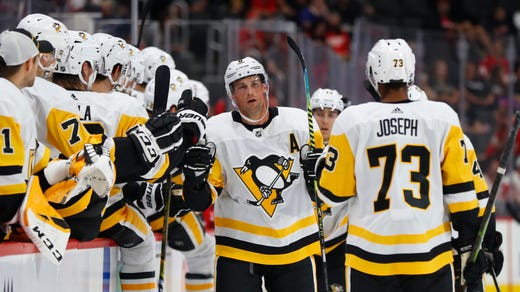 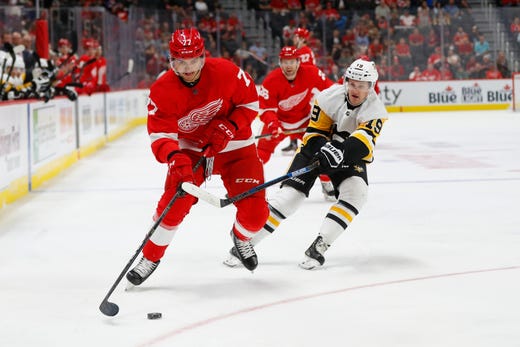 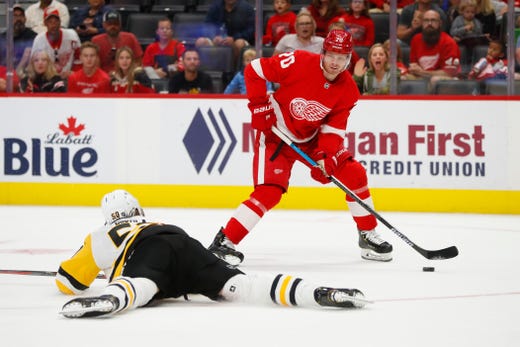 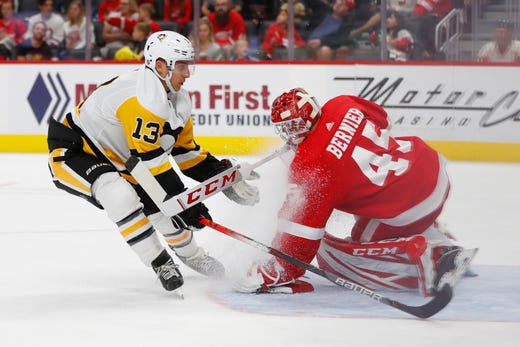 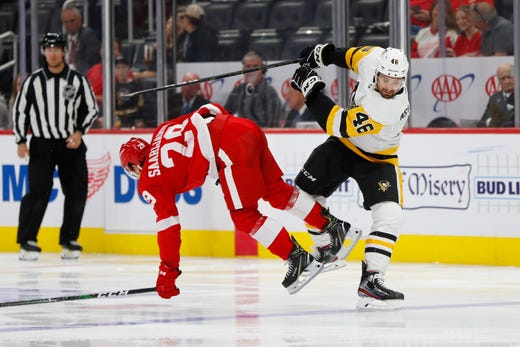 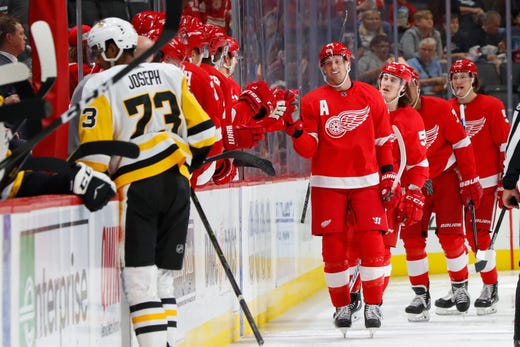 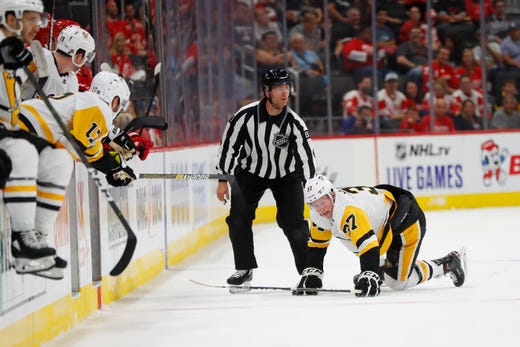 Pittsburgh Penguins' Sam Lafferty is helped to the bench by an official in the first period. Paul Sancya, AP
Fullscreen 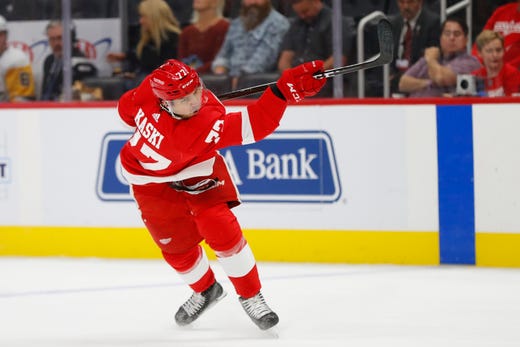 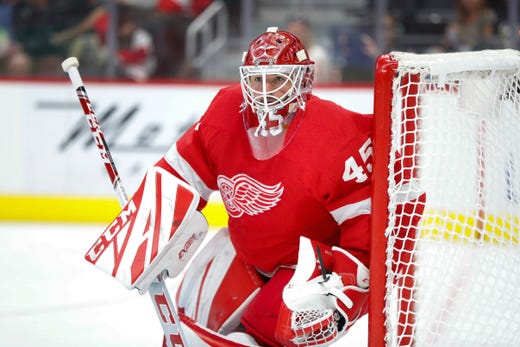 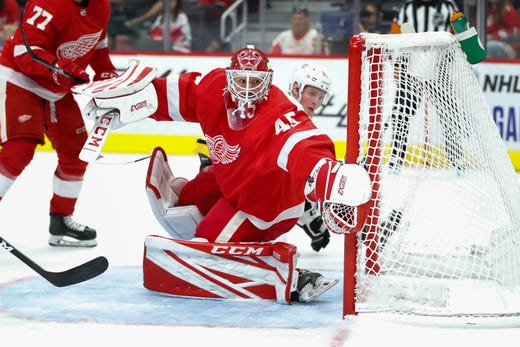 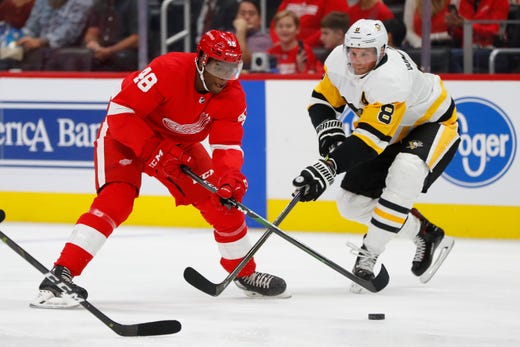 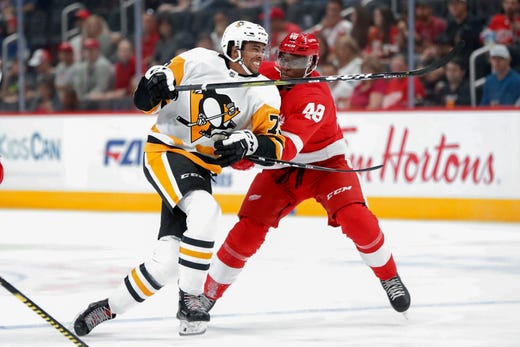 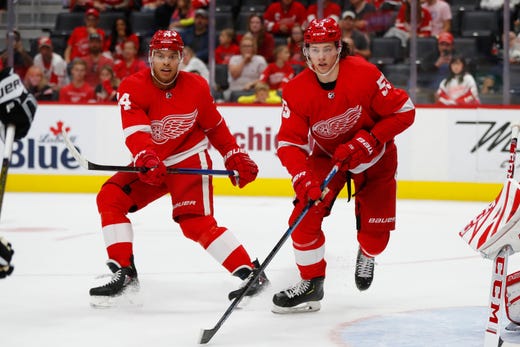 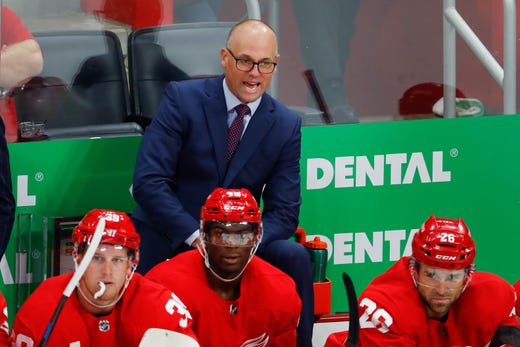 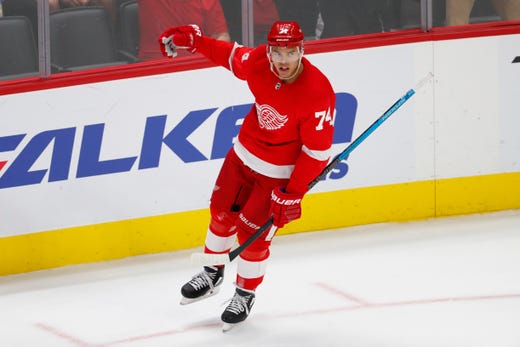