Anthony Mantha bet on himself two years ago and the gamble might pay off handsomely this summer.

Detroit – Anthony Mantha bet on himself two years ago and the gamble might pay off handsomely this summer.

Mantha and his representatives wanted the shorter deal, believing he had more within him – more goals, more assists, more impact. Mantha believed he was simply becoming a better player. 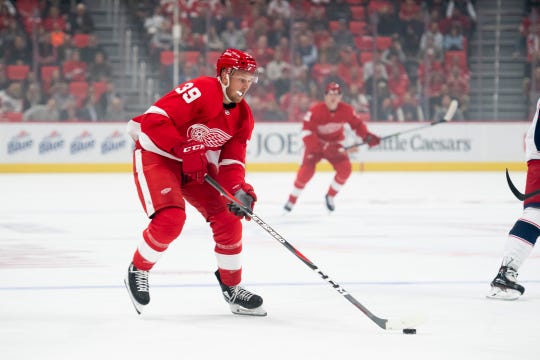 That decision now appears to be favoring the 25-year-old Mantha. He’s coming off a 25-goal season (in just 67 games) and is part of a potent offensive line with Dylan Larkin and Tyler Bertuzzi.

This summer, players slightly younger than Mantha – and not that far ahead of him statistically – were signing contracts in the range of $6 to $10 million per year, raising the bar on deals for young stars in the NHL.

Mantha took notice of the deals.

Mantha seems poised to deliver the type of offensive numbers needed to have a big payday.

Coach Jeff Blashill and Mantha’s teammates have raved about Mantha’s preseason, the way he has shot the puck and his skating.

At 6-foot-5 and 225 pounds, Mantha appears to be settling in as one of the premier power forwards in the NHL.

In a league where speed is becoming so valuable and necessary, Mantha has the speed, size and muscle to be a unique NHL figure.

“I just want to go out and have one of my best years, and that’s really the mentality I’m going into this season,” Mantha said. “Just having the same line, that helps with your confidence. You know what to expect from your linemates because you’ve played with them already and the chemistry was there.

“I just want to get better and better this year and take that next step.”

Mantha was coming off a 24-goal season when he signed the two-year contract in the summer of 2018 – he led the Wings in goal scoring that season – but he wasn’t satisfied. The bouts of inconsistency that had dogged him throughout his early pro career in the minor leagues, in Grand Rapids, were still prevalent.

Blashill called out Mantha several times early in his NHL career for Mantha’s unwillingness to skate hard, or for inconsistent play. The learning curve was proving to be difficult and broad.

But Mantha was sincere about getting better and the Wings continued to believe in him. 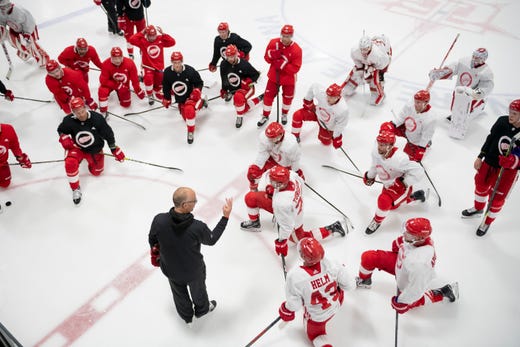 Go through the gallery for a player-by-player analysis on the 2019-20 Detroit Red Wings by Ted Kulfan. David Guralnick, Detroit News
Fullscreen 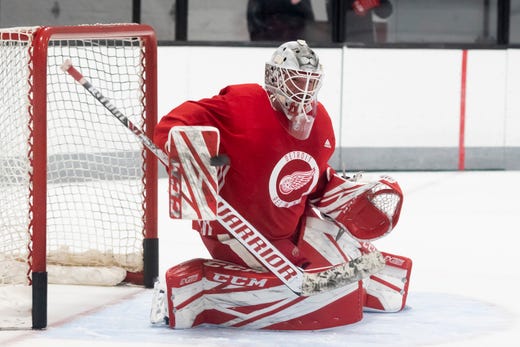 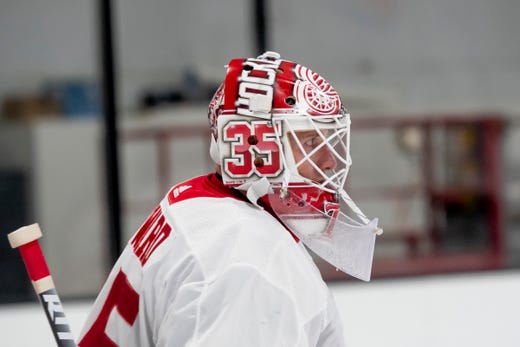 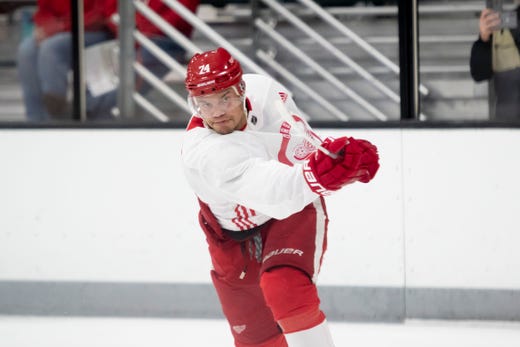 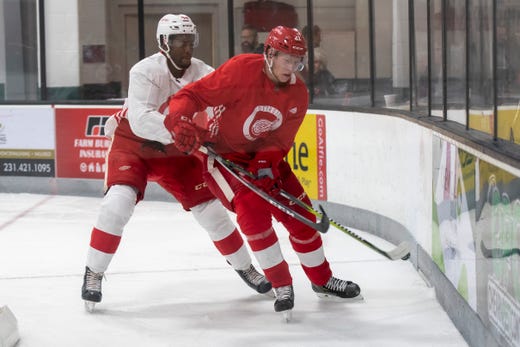 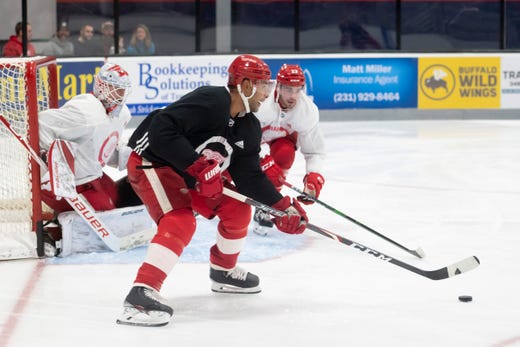 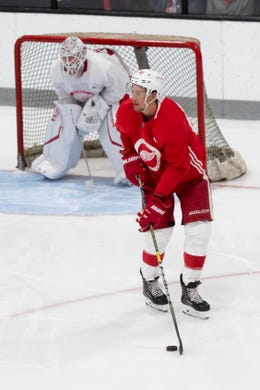 Danny DeKeyser – Age: 29. Ht./Wt.: 6-3/192. Stats: 52 games, 5 goals, 15 assists, 20 points. Analysis: If DeKeyser can carry over the level of his play from the second half of last season, it would be a huge lift for this defense, which is in a transition phase. David Guralnick, Detroit News
Fullscreen 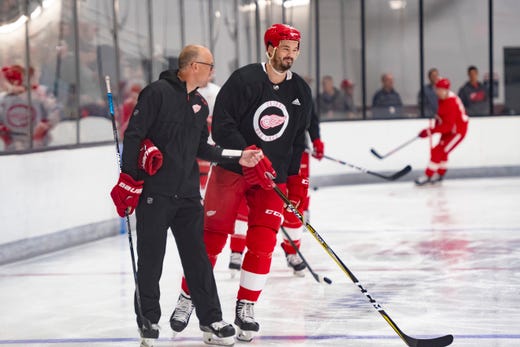 Jonathan Ericsson – Age: 35. Ht./Wt.: 6-4/220. Stats: 52 games, 3 goals, 2 assists, 5 points. Analysis: Missed much of last season due to injury and was hurt most of September. Ericsson’s career as a Red Wing is winding down. He’s another possible piece at the trade deadline (if healthy). David Guralnick, Detroit News
Fullscreen 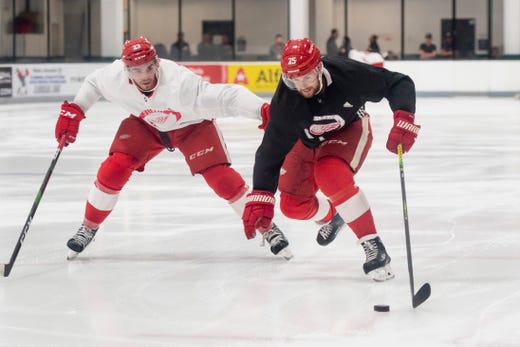 Mike Green – Age: 34 (on Oct. 12). Ht./Wt.: 6-1/207. Stats: 43 games, 5 goals, 21 assists, 26 points. Analysis: Like Trevor Daley and Jonathan Ericsson, Green is in the final year of his contract. His offensive ability could help the Wings and make him a valuable asset at the deadline. David Guralnick, Detroit News
Fullscreen 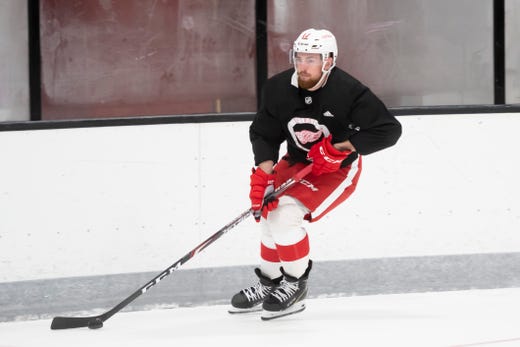 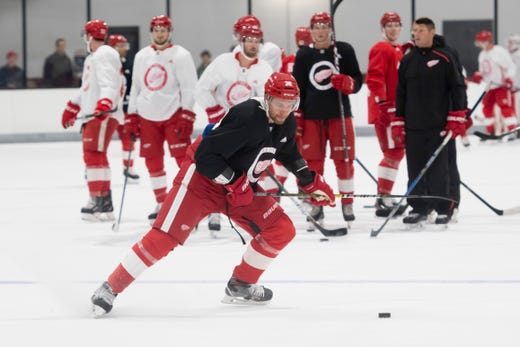 Patrik Nemeth – Age: 27. Ht./Wt.: 6-3/219. Stats: 74 games, 1 goal, 9 assists, 10 points. Analysis: Will pick up many of Niklas Kronwall’s tough minutes, and if the preseason was an indication, could do them well. A true defensive defenseman. David Guralnick, Detroit News
Fullscreen 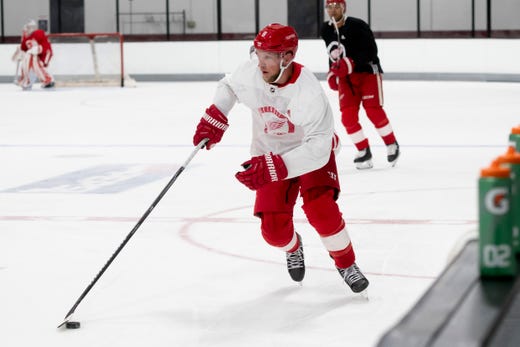 Andreas Athanasiou – Age: 25. Ht./Wt.: 6-2/188. Stats: 76 games, 30 goals, 24 assists, 54 points. Analysis: Didn’t see a lot of playing time in the preseason, which was a minor concern as he was slowed by some sort of “tweak.” But Athanasiou is counted on heavily to duplicate his 30-goal season. This team needs that offense. David Guralnick, Detroit News
Fullscreen 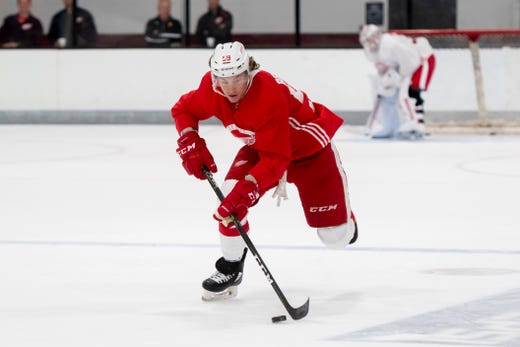 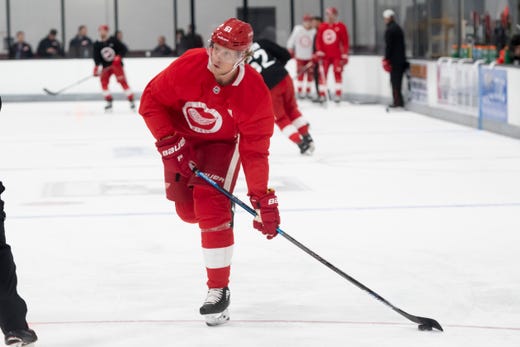 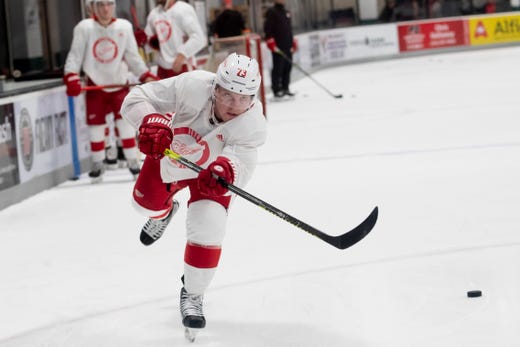 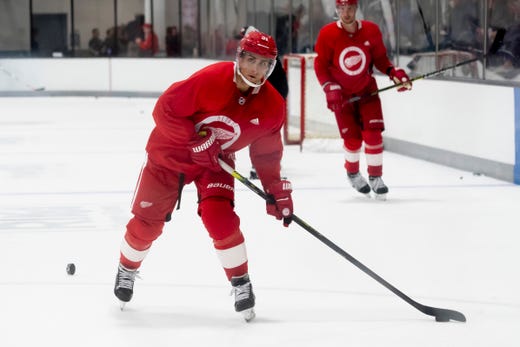 Valtteri Filppula – Age: 35. Ht./Wt.: 6-0/196. Stats: 72 games, 17 goals, 14 assists, 31 points. Analysis: It’s almost like Filppula never left. He has seamlessly woven his way into the room during training camp and provides the Wings with a true veteran presence on and off the ice. David Guralnick, Detroit News
Fullscreen 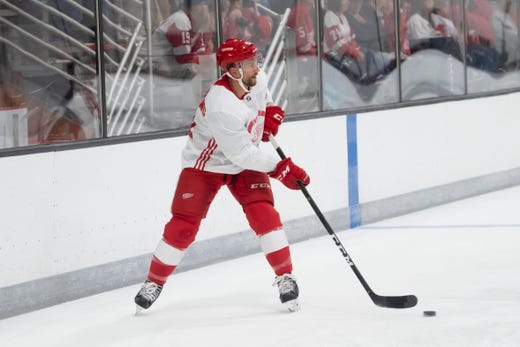 Luke Glendening – Age: 30. Ht./Wt.: 5-11/192. Stats: 78 games, 10 goals, 13 assists, 23 points. Analysis: Was given an alternate captain letter in training camp, an indication of how much the coaching staff thinks of this dedicated veteran. Good influence on a team rapidly getting younger. David Guralnick, Detroit News
Fullscreen 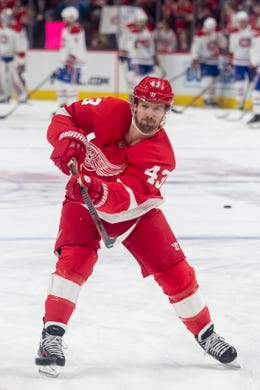 Darren Helm – Age: 32. Ht./Wt.: 6-0/196. Stats: 61 games, 7 goals, 10 assists, 17 points. Analysis: Another veteran whose name will likely pop up at the deadline. Can still kill penalties, play with speed, and be a useful bottom-six forward for a contender. David Guralnick, Detroit News
Fullscreen 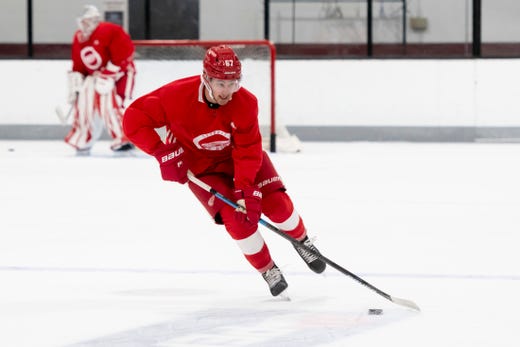 Taro Hirose – Age: 23. Ht./Wt.: 5-10/160. Stats: 10 games, 1 goal, 6 assists, 7 points. Analysis: Could turn out to be a shrewd signing by the Wings. An undrafted free agent from Michigan State who continues to provide offense and doesn’t look out of place in the NHL. David Guralnick, Detroit News
Fullscreen 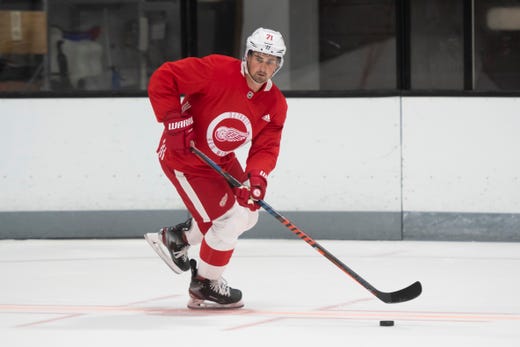 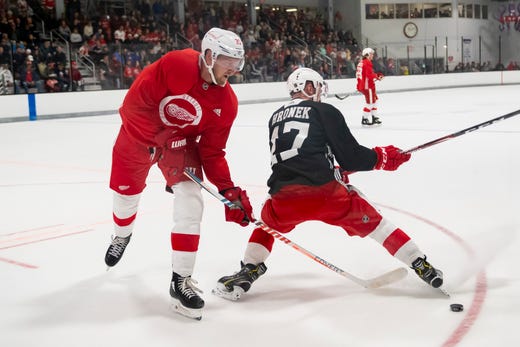 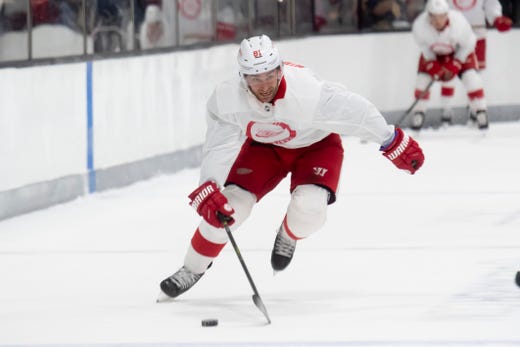 “I knew I had better in myself and I knew I was going to be able to have a better season than I did the year prior to my (contract),” Mantha said. “This year will prove us right or wrong.”

Blashill looks at Mantha’s career statistics and the gradual progression in Mantha’s offensive numbers, including juniors and minors, and believes the same can happen in the NHL.

“He progressively got more productive,” Blashill said. “(We’re) hoping the same rings true in the NHL. Certainly last year would have been his most productive had he stayed healthy.

“He could score a lot of goals in this league. He’s a big power forward who is hard to handle. He can skate. He’s big. He has all the skills.”

Belief in himself, said Blashill, is also pushing Mantha to the next stage in his career.

“He’s understanding that he knows he can be a real high-end scorer,” Blashill said.

Larkin has watched Mantha up close in the preseason and noticed his big linemate moving and dominating as if it were much later in the hockey season. That gives Larkin plenty of excitement heading into Saturday’s season opener.

“He looks great,” Larkin said. “He’s shooting it harder than I’ve ever seen him shoot it. He looks like he’s dangerous whenever he’s shooting it and he’s fun to play with. His confidence is high right now and that’s good for our team.”

Mantha thinks he is ready to help lead this Wings team to a finish better than most analysts expect. 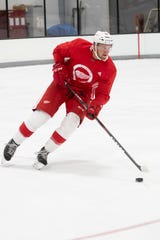 Mantha had one of his best offseasons in terms of training, following an outstanding performance for Canada in the world championships in May.

He’s at an age and experience level where he understands what it takes to be a productive force in the NHL.

Now, with an opportunity to set himself up financially for life, Mantha is excited about what these next six months can bring.

“I really hope so, I think I’m ready,” said Mantha of the upcoming season. “The skating has been good, shooting has been good in the preseason. Hopefully everything clicks, and as a team we click also.

“The more wins we get the more fun we have in the room, and the more fun, the better you play.”