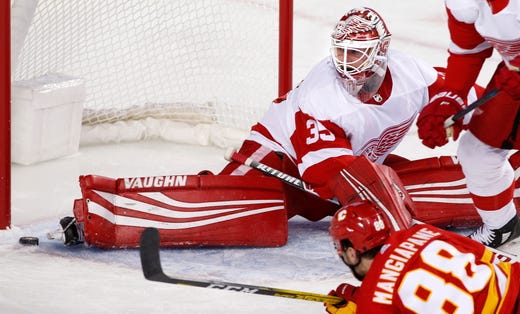 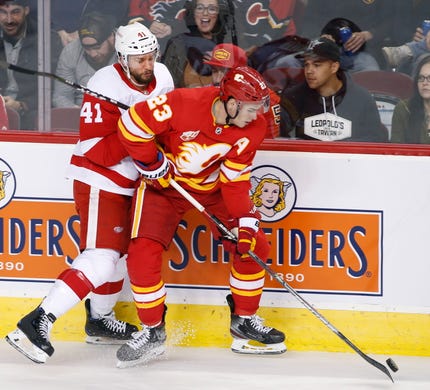 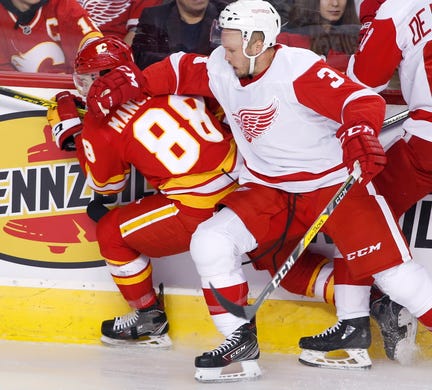 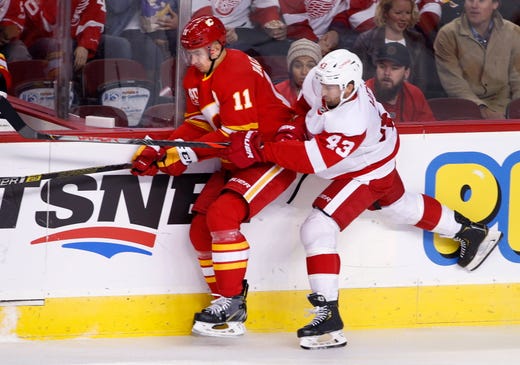 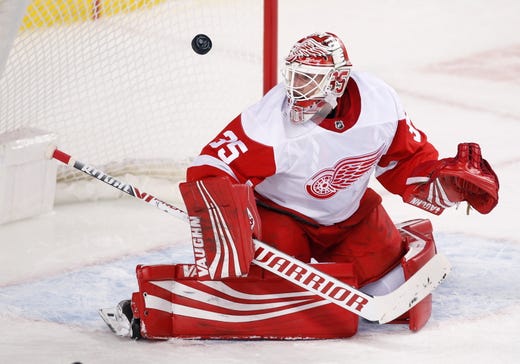 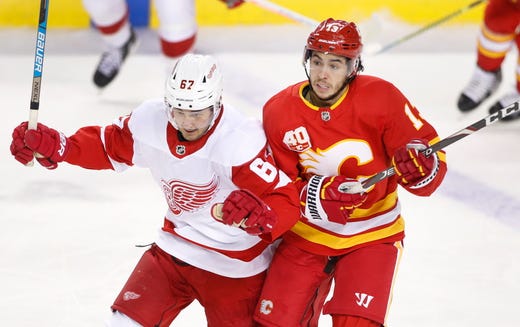 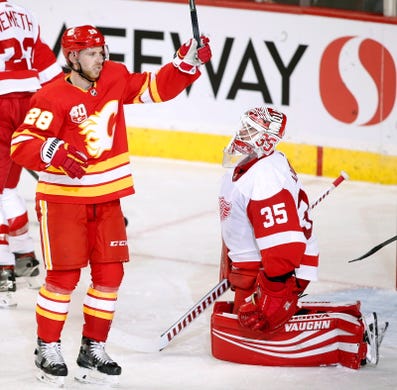 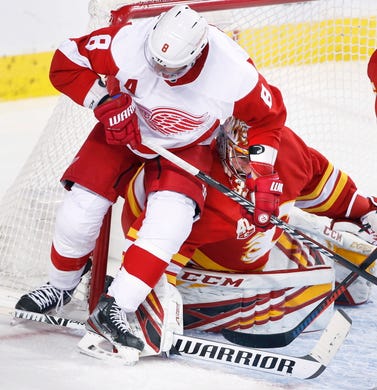 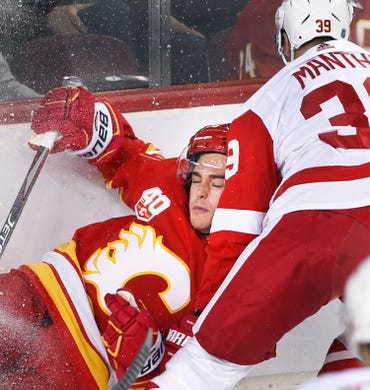 After a nice start to the season, things are slowly going the other direction for the Red Wings.

They lost their third consecutive game Thursday — after winning three of their first four this season —  in Calgary, 5-1.

The Wings have lost the first two games of this three-game western Canada trip, which ends Friday in Edmonton. 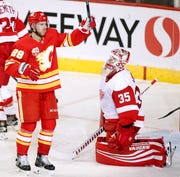 In an effort to ignite a moribund offense — with exception of the high-scoring first line — coach Jeff Blashill juggled his forward lines and split up the Tyler Bertuzzi, Dylan Larkin and Anthony Mantha top unit.

Darren Helm replaced Bertuzzi on the line, and scored the lone Wings’ goal.

But except for a fine, fast-paced second period, the Red Wings didn’t get much going in the other 40 minutes, and Calgary — just as Vancouver did Tuesday — won the special teams battle.

Here are other highlights from Tuesday’s game:

► Detroit’s goal: Just 28 seconds after Calgary took a 2-0 lead, Helm answered. Dennis Cholowski found Anthony Mantha on a breakaway. Mantha was stopped by Flames goalie David Rittich, but the puck trickled past Rittich, who never controlled it and Helm — give him credit for continuing to  to skate hard — knocked in the loose puck for his third goal at 10:13 in the second period.

► Line shuffling: Blashill said he may tinker with the lines in an effort to create more offense after Tuesday’s loss — and Blashill did. He replaced Bertuzzi on the first line with Helm, who joined Larkin and Mantha.

But again, after the Larkin line, there wasn’t much significant offensive flow and quality chances.

► Special team problems — again: Just as in Vancouver, the Red Wings struggled badly on special teams. The Flames were 2-for-5 on the power play, while the Wings weren’t able to capitalize on two power-play attempts. The Wings are now 2-for-20 on the power play this season.

► Calgary goals: Andrew Mangiapane (2nd goal) redirected a shot from Mark Giordano that fluttered past Jimmy Howard, after Mantha couldn’t control a clearing attempt off the boards by Larkin, leading to Giordano taking the shot at 11:01 of the 1st period.

Calgary took a 2-0 second-period lead on Elias Lindholm’s power-play goal at  9:45. Matthew Tkachuk’s batted a pass to Lindholm near the post, and Lindholm got just enough to beat Howard for his fifth goal.

In the third period, Sam Bennett scored off a feed from Milan Lucic behind the net — Lucic beat Alex Biega to the puck — to make it 3-1 at 3:29. Just 1:28 later, Derek Ryan got credit for a goal that made it 4-1 off a scramble, Filip Hronek knocking the puck off Andreas Athanasiou’s skate. Giordano made it 5-1 on the power play at 8:47, making it 5-1.

► Helm's active night:  Thursday’s goal was the third for Helm, who was rewarded for his energy early in this season by being promoted to the first line. Helm has been skating well, and has contributed some timely goals. Helm took a five-minute major for slashing Lindholm and earned a game misconduct on the play, after Lindholm hit Helm near the head moments before.

► Next: The Wings visit Edmonton Friday (9 p.m./Fox Sports Detroit/97.1 FM) for the final game in a three-game road trip through western Canada.