The incident occurred at 5 minutes, 10 seconds of the third perio in Thursday night's game. 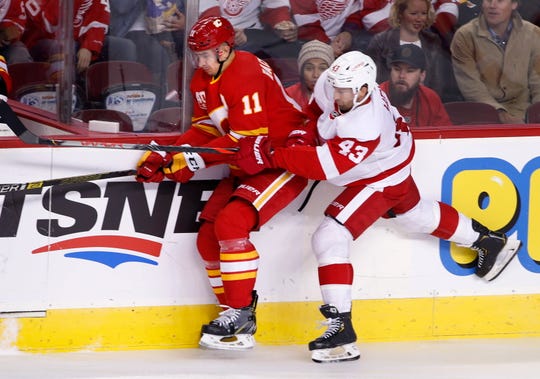 Detroit — Darren Helm has been fined $5,000 for slashing Calgary forward Elias Lindholm on Thursday in the Flames’ 5-1 victory over the Red Wings.

The incident occurred at 5 minutes, 10 seconds of the third period, after Lindholm struck Helm near the head of the Wings’ forward.

Helm fell to the ice, but got himself up and with both hands, slashed the back of Lindholm’s legs.

Lindholm dropped to the ice and had to be helped off the ice.

Officials on the ice gave Helm a major penalty for slashing — Calgary scored one goal during the power play — plus a game misconduct which forced Helm out of the game.

Lindholm was given a minor for interference.

More: Ken Holland will have 'strange' feelings when his Oilers face Red Wings

The $5,000 fine is the maximum allowable under the collective bargaining agreement.

After the game, coach Jeff Blashill told reporters the Wings’ have to be disciplined in those types of situations.

“Their guy comes with an elbow that should have probably been called right away,” Blashill said. “Then Darren reacts to that as most guys would, you get an elbow to the face for no reason you’re going to react. We got to be more disciplined in those situations, but he (Helm) slashed him. I don’t think the slash was that super-hard, but it sure looked hard the way he went down."