The Wings lost their second consecutive game, this one 4-3 to San Jose. The Sharks won the shootout 1-0. 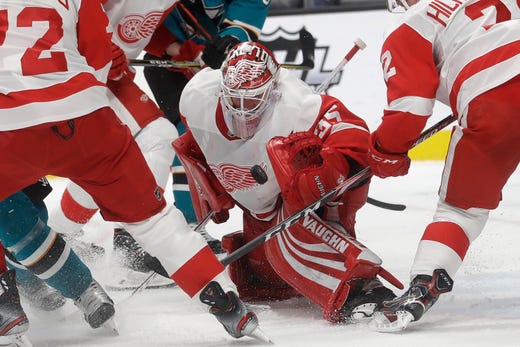 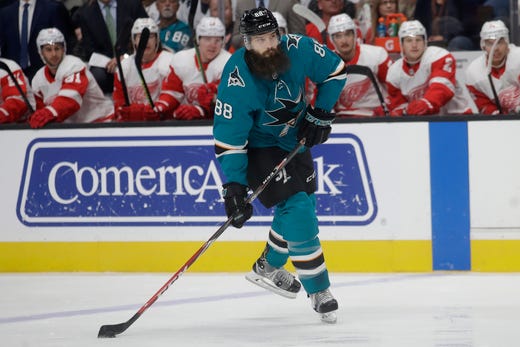 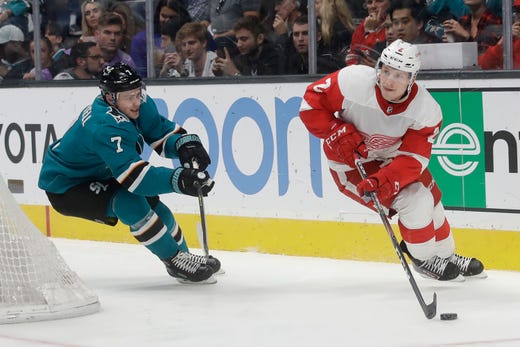 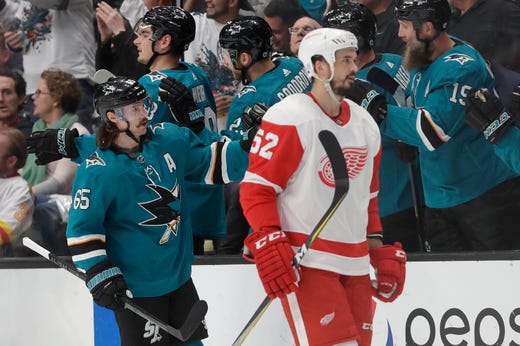 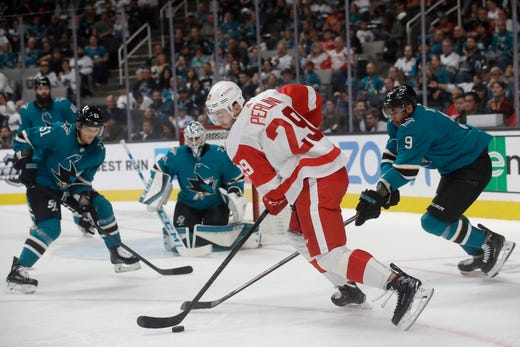 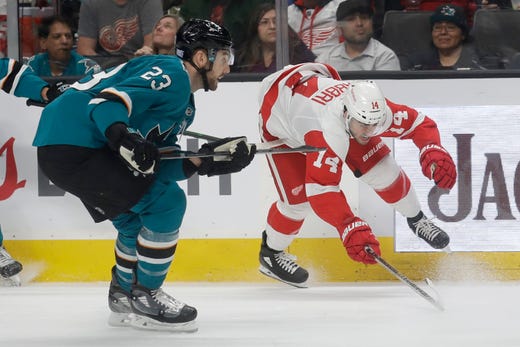 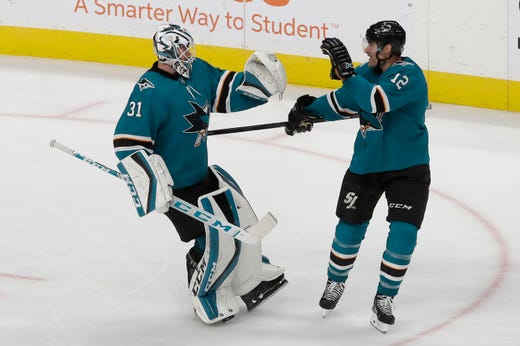 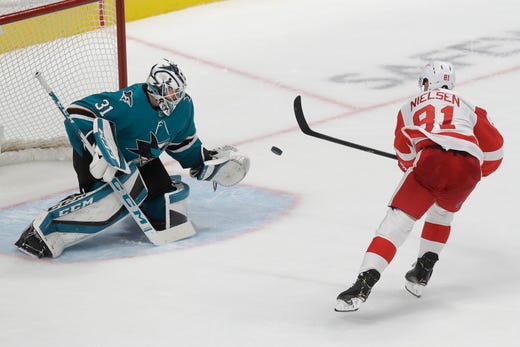 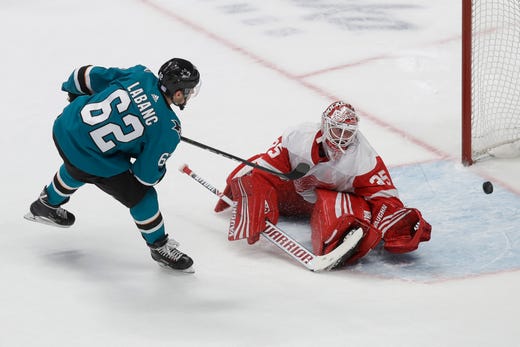 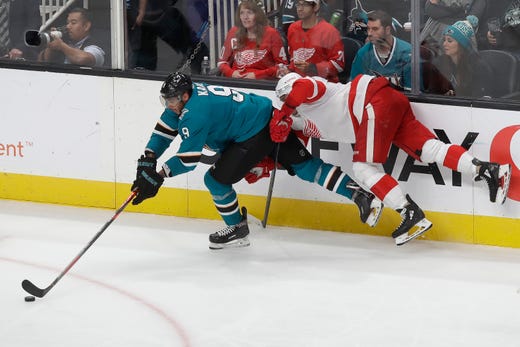 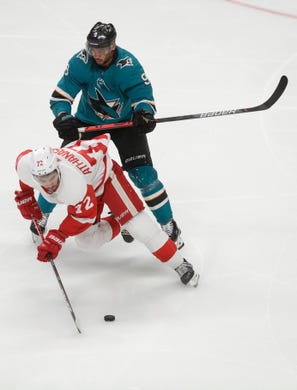 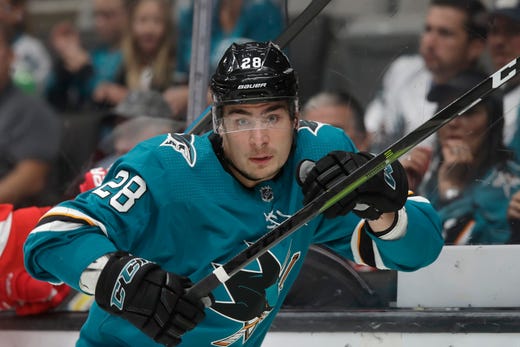 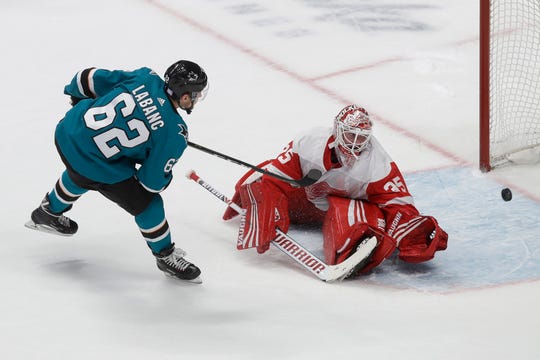 This three-game trip through California for the Red Wings was worth staying up for.

Three games, and all of them went into overtime — and Saturday, the shootout.

The bad news for the Wings was that they lost their second consecutive game, this one 4-3 to San Jose. The Sharks won the shootout 1-0.

Andreas Athanasiou scored his second goal of the game in the third period, tying the score 3-3.

In overtime, the Wings had a power play when Athanasiou was tripped by Brent Burns, but the Wings couldn't convert.

Athanasiou, who had one of his best games of the season, then almost ended it deflecting a great pass from Dylan Larkin — who had missed on a breakaway early in overtime — but Athanasiou's shot deflected off the crossbar and the game continued.

Finally in the shootout, the Sharks' Kevin Labanc — who had a goal and two assists — scored the lone goal against goaltender Jimmy Howard.

Here are other highlights from Saturday’s game:

Robby Fabbri made a nice play along the boards and threaded a pass to a streaking Athanasiou, who broke in alone and slipped a shot through Jones.

Hirose briefly tied it 2-2 with his first goal of the season, ending a 17-game drought, converting a pass from Brendan Perlini (first point as a Wing) between the hashmarks at 11:34.

Athanasoiu scored his fifth goal, and second of the game, converting off a 2-on-1 rush from Valtteri Filppula at 15:46 of the third period. Robby Fabbri contributed his second assist of the game, on both of Athanasiou's goals.

Labanc carried the puck into the zone and snapped a shot that Howard stopped but didn’t control the rebound.

Couture swatted a rebound that Howard didn’t gather, the puck squirted to his side, and Labanc flipped the puck into the net at 18:59 of the first period, Labanc’s sixth goal.

Vlasic made it 2-0 at 1:11 of the second period. A bad turnover by Anthony Mantha kept the Sharks on the attack, and Logan Couture found Vlasic at the point, and Vlasic blasted his third goal.

Erik Karlsson gave the Sharks a 3-2 lead at 12:32, on the power play. It was Karlsson’s second goal, a shot from the top of the slot past a screened Howard, with Joe Hicketts in the box for slashing.

The Wings were without Mike Green, who returned home as he and his wife are expecting their second child. Joe Hicketts replaced Green in the lineup.

So the Wings’ defensive pairs Saturday looked like this: Dennis Cholowski and Madison Bowey, Hicketts and Dylan McIlrath, and Jonathan Ericsson and Alex Biega.

Each of those six defensemen have spent time in Grand Rapids or been healthy scratches with the Wings this season.

But this patchwork collection did an admirable job against a dangerous Sharks attack, rarely allowing quality scoring chances and moving the puck well.

Luke Glendening hadn’t played since Oct. 23 in Ottawa and made an immediate impact with a good scoring chance his first shift and effective penalty kill in the first period.

Glendening had a team-high five shots in 13 minutes, 31 seconds.

Not having scored in his opening 17 games this season, there was speculation building that Taro Hirose could be headed to Grand Rapids soon, especially being a healthy scratch for four games.

But Hirose scored his first goal of the season, tying the score in the second period, converting a nice pass from Brendan Perlini — who had one of his best games as a Wing — between the hashmarks.

Goaltender Jimmy Howard hadn't started in four starts but battled his way through this game.

Howard preserved a point for the Wings with two big stops in the final two minutes of regulation, making a point-blank save on Logan Couture and a rebound by Patrick Marleau, keeping the score tied.