Veteran defenseman Jonathan Ericsson happy to be back with Red Wings

Red Wings defenseman Jonathan Ericsson didn't play in any preseason games, and started the season on the injured list.

Veteran defenseman Jonathan Ericsson happy to be back with Red Wings

Jonathan Ericsson returned to the Red Wings last week after being sent to the minors last month. The Detroit News

Detroit — Jonathan Ericsson got his welcome-back-to-the-NHL moment during Monday’s practice.

In a battle drill with Brendan Perlini, an errant stick cut Ericsson’s face, and the veteran defenseman needed seven stitches. 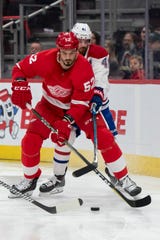 “(General manager) Steve (Yzerman) came up to me after practice and said, ‘Welcome back to the NHL’,” Ericsson said. “It was a little funny.”

What hasn’t been funny, for Ericsson, thus far has been this regular season. Actually, going back to March, as Ericsson has been battling back and hip injuries, unable to play.

He didn’t play in any preseason games, and started the season on the injured list.

When the Red Wings waived Ericsson, 35, and sent him to Grand Rapids on Oct. 22, he wasn’t sure if that was it for his Wings’ career.

“I didn’t really know what to expect,” Ericsson said after Tuesday’s morning skate. “I had conversations with Steve when I was there (in Grand Rapids), and I felt like he meant that I was going to come back, but you never know. He said I can’t promise anything, but it’s kind of up to me, too, to go down there and be a pro about it and try to work myself back up here.”

Which Ericsson did, with an impressive 10-game run in Grand Rapids, both on and off the ice.

“There wasn’t necessarily a plan other than we knew he needed to play,” coach Jeff Blashill said. “The approach he took was a great example of how you should approach it. He went down there and worked his butt off and played good hockey. He was a team guy and wasn’t pouting or any of that stuff.

“Because of that, we felt confident when we needed a left-shot defenseman to kill penalties and have size, we called him back up. He’s done a good job.”

Having played 664 games with the Wings over 13 seasons,  a Tuesday night in November against the Ottawa Senators isn’t going to mean anything much more special for Ericsson.

Although, Ericsson did like being back with his Red Wings teammates, and being in the NHL.

“For me, it’s just nice to be back,” Ericsson said. “When you meet back up with the guys, it was like yesterday. It was a great time in Grand Rapids, but my goal is to stay up here, be healthy, and I’m just glad to be back right now.”

Ericsson understood the decision to return to the AHL, given his lack of playing time, going back to last season.

“Absolutely, I hadn’t played in such a long time,” said Ericsson, who wasn’t eligible to go to Grand Rapids on a conditioning stint. “I played three games in four nights right away and that was tough, tough on the body. If you’re in game shape, it’s not as tough.

Possibly the toughest part of the time in Grand Rapids was the time spent away from family.

Ericsson would commute from Metro Detroit to Grand Rapids every day, return home, then wake up to get on the road by 6 a.m. the following day.

There were the road trips with the Griffins, too.

In a relatively short period of time, Ericsson spent a lot of time away from his wife and kids.

“It was just one month, you drive between Detroit and Grand Rapids every day, you try to be as home as much as I could,” Ericsson said. “I remember just before I got called back up, my daughter was very sad and she asked me whether I’d be there the next day when she woke up, and I said ‘No, I’m going to have to leave real early.'

“She was real sad and saying I’m gone too much. That was tough, that was the tough part.”

Blashill said defensemen Danny DeKeyser and Trevor Daley are both still “weeks" away.

DeKeyser last played on Oct. 22 — he’s only played eight games this season — and doesn’t look like a return to the lineup is coming soon.

“No significant progress,” Blashill said. “Where that leads to, I don’t know, but right now we won’t have him back for the forseeable future.”

Daley hasn’t played since Nov. 2 — he’s played 11 games this season — because of a lower-body injury.

“Similar to Danny in that there just has been no significant progress whatsoever,” Blashill said. “It means weeks away, but once you’ve been out as both of those guys have been out, it’s at least a week (of skating and regaining conditioning).”

One positive on the defense is Patrik Nemeth (bruise/infection) is making progress and could return before the original three-week estimate. Nemeth missed his fourth consecutive game Tuesday.

Defenseman Filip Hronek (lower body) was going to be a game-time decision Tuesday after missing the last two games.