The Red Wings, if they finish with the worst record in the NHL, would have an 18.5 percent chance to land the No. 1 overall pick in the draft.

Detroit — The Lions’ poor record has turned fans’ attention away from the current team and to the NFL Draft.

The Red Wings’ season hasn’t been any better. In fact, it can be argued that it has been worse. 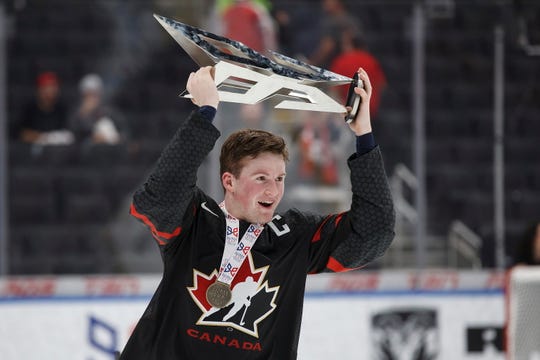 So this is a good time to begin getting acquainted with who will be available in the 2020 NHL Draft.

The Wings will be halfway done with the regular season at the end of December. Chances are, things will continue to look as bleak as they are currently.

The NHL has a lottery system for the draft and the team with the worst record in the league — the Red Wings comfortably have that now — has an 18.5 percent chance of winning the lottery.

Colorado (via Ottawa) had the No. 1 pick last spring and wound up with the fourth pick, an example of how there are no guarantees.

There are three players that are attracting a lot of attention right now, and Wings’ fans should begin to take notice.

Forwards Alexis Lafreniere and Quinton Byfield, and goaltender Yaroslav Askarov, are players who could intrigue the Wings, even this early in the scouting process.

But they aren’t alone in what could be a rather deep draft.

With that in mind, here are my top 10 prospects, as things currently stand, for the 2020 NHL Draft.

► 1. Alexis Lafreniere, left wing, 6-foot-1, 192 pounds (Rimouski, Quebec junior league): Lafreniere generally has been regarded as the best player in this draft class for several years. He’s an elite stickhandler who can make the hockey highlights with his wizardy with the puck. Scouts like his competitive edge, but there are some reservations about Lafreniere’s skating and speed.

“Lafreniere can finish the plays or he can make the plays,” said Craig Button, TSN director of scouting, last month. “He’s the best player at this point, but there are five or six guys who could force their way into the discussion.” 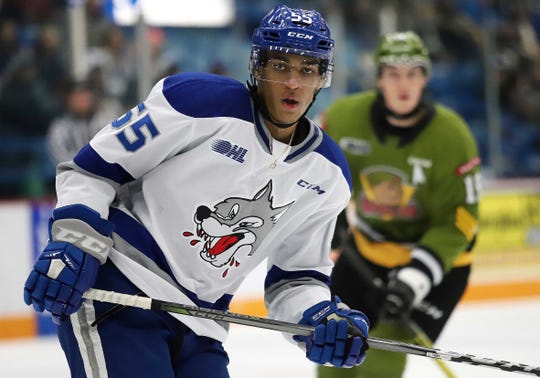 ► 2. Quinton Byfield, center, 6-foot-4, 214 pounds (Sudbury, OHL): Some scouts, in the early projections, are comparing Byfield to a young Evgeni Malkin. Byfield is a towering, big center who has elite skill and is an outstanding skater for his size. This type of center, with his skills, could anchor an organization for a decade.

► 3. Yaroslav Askarov, goaltender, 6-foot-3, 176 pounds (SKA-Russia): It’s so uncommon for a goaltender to be considered this high in the draft, but Askarov is a unique player. Scouts love his athleticism and aggressiveness, and at 6-foot-3, has the size coaches love these days.

► 4. Alexander Holtz, right wing, 6 feet, 183 pounds, (Djurgarden, Sweden): Analysts love the goal-scoring potential of Holtz, who has a powerful shot and is an elite passer. Holtz is outstanding on the perimeter, but isn’t bashful about going to the dirty areas on the ice and be effective.

► 5. Lucas Raymond, left wing, 5-foot-10, 165 pounds (Frolunda, Sweden): There are no questions about Raymond’s hockey sense or skill, but he isn’t the biggest player around, and his skating needs a bit of work.

Still, some projections have compared Raymond to Toronto’s Mitch Marner, another explosive playmaker.

► 6. Hendrix Lapierre, center, 5-foot-11, 172 pounds, (Chicoutimi, Quebec league): Lapierre has the potential to be an elite two-way centerman, with the instincts to influence the game at both ends of the ice.

► 7. Cole Perfetti, left wing, 5-foot-10, 185 pounds, Saginaw (OHL): Perfetti has been a slow starter this season, but his ability to make plays can’t be denied. Another smallish player who has to out-think opponents, Perfetti has a cannon shot, and has drawn comparisons to Cole Caufield, a similar player in last year’s draft out of the USA junior program.

► 8. Jamie Drysdale, defenseman, 5-foot-11, 165 pounds (Erie, OHL): Drysdale is what a lot of teams are looking for these days: That offensive defenseman who is an elite skater and control the game with his skating, stickhandling and game-breaking ability.

► 9. Dylan Holloway, left wing, 6 feet, 192 pounds (Wisconsin, NCAA): Holloway is one of those players who does a lot of things very well, though maybe nothing exceptionally well. He’s a great skater, and is dangerous with the puck on his stick.

► 10. Tim Stutzle, left wing, 6-foot-1, 185 pounds (Adler Mannheim, Germany): A dazzling offensive player who has superior skills and is an elite skater. Stutzle is playing against men and doesn’t look out of place, always a good indicator for a young player. Needs to increase his strength.