Toronto finally solved Pickard, the Wings’ backup goalie called up for Saturday's game from Grand Rapids, and wound up defeating the Wings 4-1.

Dylan Larkin was not pleased with the way teammate Anthony Mantha was taken down to the ice against Toronto. The Detroit News

Other than that, it was a decent evening, as they suffered another loss Saturday, 4-1 to the Toronto Maple Leafs.

Goaltender Jonathan Bernier left with a sore groin just seven minutes into the game and was replaced by Calvin Pickard. 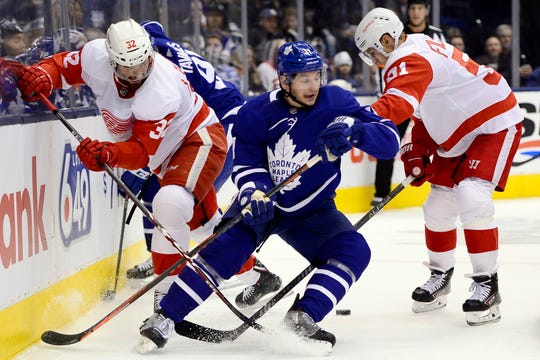 Pickard entered on a Toronto power play, which the Wings successfully killed, then kept the Wings close for as long as he could against the offensively powerful Leafs.

“He came in and gave us a chance to win this game,” Red Wings forward Dylan Larkin said. “We just needed more offensively and we didn’t help him out enough.”

Pickhard made 16 saves, and frustrated the Leafs at times despite jumping into the game cold.

“I just wish I could have come up with a save or two for our guys,” Pickard said. “We played a real hard game, especially in the second period. It was a one-goal game in the third, it was right there for us.”

Red Wings coach Jeff Blashill said Bernier will be unavailable Sunday against Arizona, and the plan to start Jimmy Howard in net remains the same but with Pickard as the backup.

Mantha was thrown onto the ice by Leafs defenseman Jake Muzzin late in the third period. Mantha went after Muzzin after the Toronto defenseman hit Madison Bowey, but was sent down to the ice in an awkward fall.

Mantha was down on the ice briefly, and looked groggy as he left the ice with the help of Bowey and trainer Piet Van Zant.

Blashill ruled Mantha out for Sunday’s game, and will further update later in the day.

“That’s real scary, I just hope he is all right,” Blashill said of Mantha’s fall. “He (Mantha) went in to defend the hit, he initiated it and Muzzin took him down.

“We’ll see where he’s (Mantha) at. I want to make sure Anthony is all right, that’s the first thing I want to do and obviously it was a bit scary the way it looked. I’m just hoping he’s all right and we’ll go from there.”

It was the third time in Mantha's career with the Red Wings he was injured coming to the aid of a teammate.

Larkin, who was angry on the ice after the incident, wasn’t pleased with the entire sequence.

“Real scary, his head hits the ice like that, it’s scary,” Larkin said. “It’s preventable. The league really needs to look at that. That can’t be a wrestling move, can’t be in our game like that, there’s no defense for that. Very scary. Hopefully he’ll be OK. 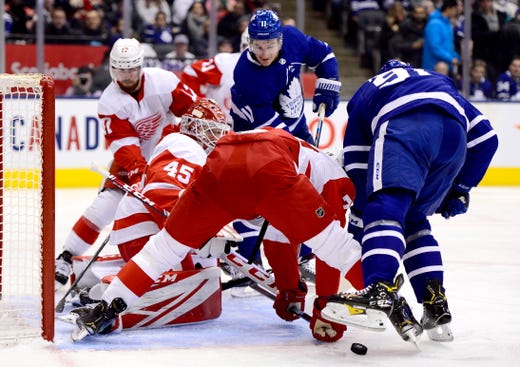 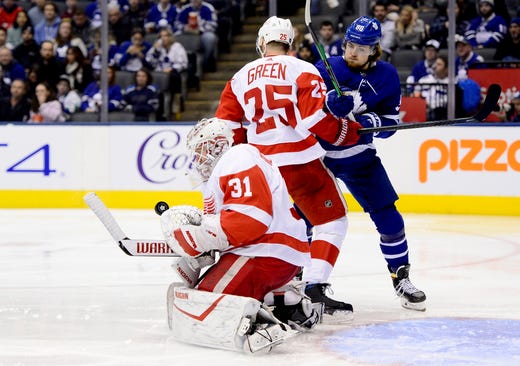 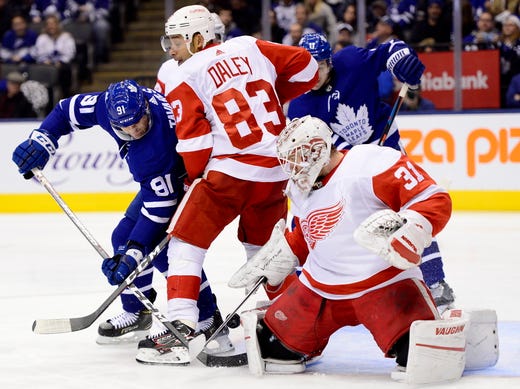 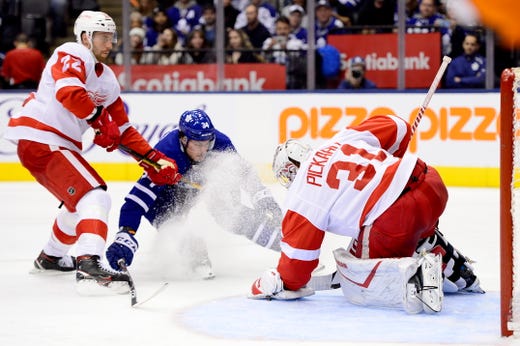 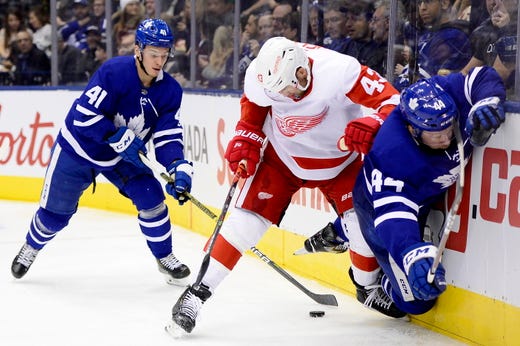 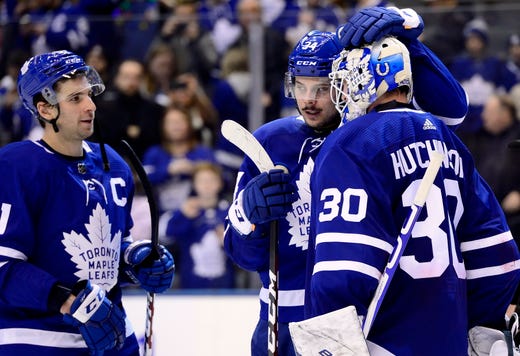 Zach Hyman (11) of the Toronto Maple Leafs is pulled down on his way to scoring by Mike Green (25) of the Detroit Red Wings. The Maple Leafs won, 4-1. Claus Andersen, Tribune News Service
Fullscreen 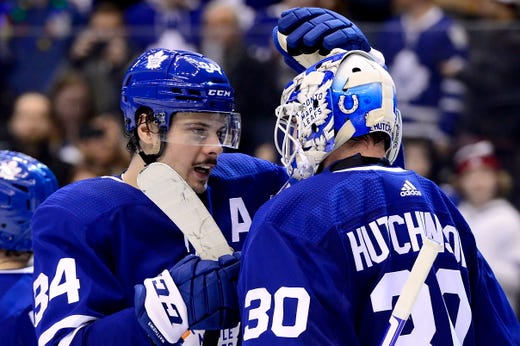 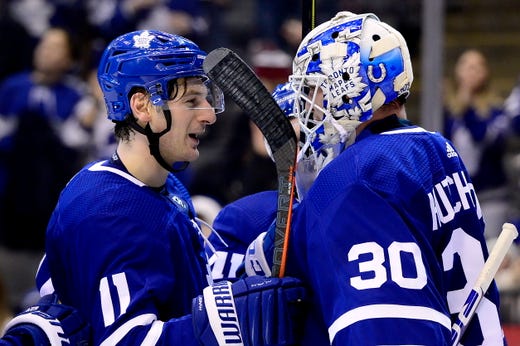 It was the first win of the season for Hutchinson (1-5-1), who came into the game with a ghastly 4.55 goals-against average and .876 save percentage.

The Wings trailed 1-0 to start the third period, couldn’t convert on the power play, and after a Filip Zadina tripping penalty, Matthews scored to make it 2-0 and changed the complexion of the game.

“We come out on the power play, we don’t score,” Blashill said. “They get a power play, they do score, and that can’t happen.

“You end up shooting yourself in the foot, it’s a learning process for this group. It’s a hard learning process. I liked the fact we came out with some emotion and passion and played hard.”