John Niyo and Ted Kulfan talk about the Red Wings at the midseason mark and what to look forward to in the second half of the season. The Detroit News

Detroit – It’s no secret the Red Wings don’t have a lot of talent and depth on their roster.

The fact they are last in the standings at the midway point in the schedule – and a distant last – signifies where the Wings are at. 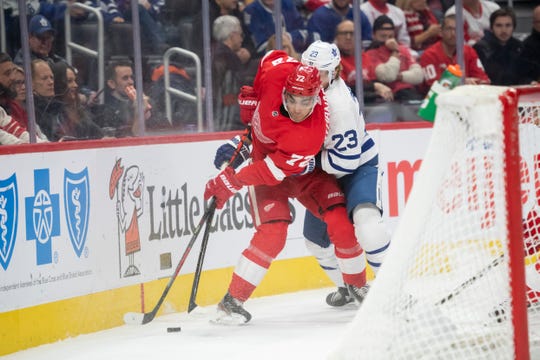 But when you compound it with significant injuries, the latest being Andreas Athanasiou, it truly makes it a very difficult situation.

That's three of the Wings' best players out of the lineup as Athanasiou joins forward Anthony Mantha (ribs) and defenseman Danny DeKeyser. Mantha will be out about a month, DeKeyser likely the rest of the season.

“Is there challenges? Absolutely,” Blashill said. “Are they real good players that are talented? Absolutely. But that doesn’t preclude us from winning a hockey game tonight. We can go win a game tonight by having an unreal work ethic, and if our attention to detail is great.”

Athanasiou isn’t having a banner season by any stretch of the imagination. He has 19 points (five goals) in 36 games, with a league-leading, mind-boggling, minus-35 rating.

But on a lineup that doesn’t have much offensive firepower, at least Athanasiou possesses the capability to score.

So, what do the Wings do from here?

“The one thing it does is gives us an opportunity to make sure our work ethic is great,” Blashill said. “When you’re a little undermanned from a skills standpoint, you better make sure your work ethic and competition level is unreal, and your attention to detail is unreal, and that’s how we have to play when those guys are in (the lineup), too.”

When forward Tyler Bertuzzi learned he was selected by the league for the All-Star Game – he figured it out through social media posts – there were emotions involved.

“A little bit surprised,” said Bertuzzi, who deserves the honor on this roster, given his consistent production this season. “Obviously I’m excited. It’s a big opportunity, and it’s an honor to represent the Red Wings.”

The game is Jan. 25 in St. Louis, with a skills competition the night before, and the actual game with the 3-on-3 format pitting all four divisions.

“It’s a big thing you have to focus on during the year, be consistent, and I’ve kind of done that,” Bertuzzi said. “I went through a little bit of a slump for about 10 games, but you have to be more consistent and prepared to go every night.” 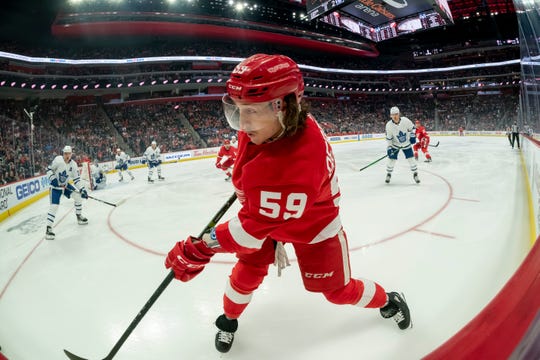 Every team in the league is represented in the game, so despite the Wings’ league-worst record, someone was going to be selected.

Bertuzzi was a bit of a realist concerning that fact.

“The best players in the league are there, and obviously if they didn’t have to pick someone from every team, I know I wouldn’t be there,” Bertuzzi said. “But I’m excited to get this opportunity.

“There are handful of guys who could have gotten that call, so I’m just happy it’s me.”

“I don’t really know what to expect,” Bertuzzi said. “I’m going in kind of blind. It’s going to be exciting. I’ve watched it on television, so it’s going to be kind of cool to be a part of.”

Blashill was pleased for Bertuzzi, given Bertuzzi’s growth as a player over the last two seasons.

“He’s had a good year from a statistical standpoint but also he’s continued to grow as hockey player,” Blashill said. “He took some big steps last year and he’s getting rewarded for that with the All-Star Game (appearance). It’s a great experience for him.

“He’ll be around some great players and that’s always a good thing.”

The work ethic that Bertuzzi brings to the rink every day, said Blashill, is something the young players on the Wings can emulate and learn from.

Blashill was hopeful that Valtteri Filppula (lower body), who missed Sunday's game, would be ready to play Tuesday night against San Jose.

... The Wings called up forward Givani Smith from Grand Rapids to replace Athanasiou.