Time does fly, and all you have to do to confirm that is look toward Brian Lashoff’s stall in the Red Wings’ locker room.

Detroit – Time does fly, and all you have to do to confirm that is look toward Brian Lashoff’s stall in the Red Wings’ locker room.

The veteran defenseman has been part of the Red Wings’ organization since September 2008, signed as an undrafted free agent. 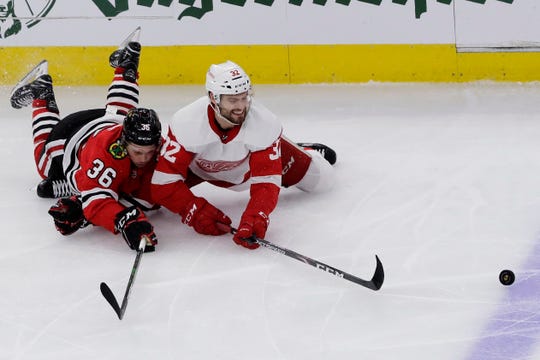 He’s had chances to test the free-agent market, but Lashoff has become a valuable part of the Wings’ organization, mentoring young defensemen in Grand Rapids and providing depth at the NHL level.

“It’s been awesome, I love playing for these guys, love playing in Grand Rapids,” said Lashoff, 29, who has been in the Wings’ lineup the last five games and counting, because of injuries on defense. “Anything that I can do to help. I’ve had a great relationship with the staff here and the players in Grand Rapids, where I’ve been fortunate we’ve had some real good teams and we win.

“And I still have my opportunities to play here. I’m grateful for it.”

Lashoff made his debut in the lockout-shortened 2012-13 season – a rental car service brought him to Columbus when injuries struck the Wings – and he played 75 games the next season with the Wings, before settling into a role between Grand Rapids and the Wings during the 2014-15 season until now.

“I go down there and try to help the guys as much as I can, whether it’s off the ice, trying to acclimate the young guys to living on their own, but also on the ice, show them that I’m preparing to be called up, as well,” Lashoff said. “If it doesn’t happen, I don’t change the way I act or play. I keep doing the same things, and that’s the biggest thing for young guys, because it can be a rollercoaster, and I try to show them you have to be on an even keel through it all.

“It’s a great feeling anytime you get called up, any year. You work hard in Grand Rapids, everybody does, to get called up. I’m no different. I’m in a role where I try to help the young guys as much as I can down there, but at the same time be ready to get the opportunity (in the NHL).”

Coach Jeff Blashill has remarked about Lashoff’s importance to the organization more than a few times, especially as a role model for the young players in Grand Rapids.

“Two, he’s a very efficient player. He can come up and just play good, solid minutes. He makes a lot of good decisions. He helps you manage through games, so when you need depth on the back end, he can provide it.

“He’s an extremely valuable part of the organization.”

Lashoff has played 133 games with the Wings over parts of seven seasons. The goal, every season, is to remain in the NHL as long as he can.

Defenseman Madison Bowey saw some power-play time during Tuesday’s victory over Montreal, and it sounds like Blashill is considering using Bowey more on the unit.

“Madison hasn’t had much time on the power play in pro hockey; certainly he did in junior,” Blashill said. “When he got here I wanted to make sure he concentrated on becoming a real good defender, because that’s going to allow him to stay in the NHL, No. 1.

“(But) what it (Bowey on the power play) gives us is two righties and I like that look at times, if you can run it off that other half-wall. That’s when Mike Green has been at his best, power-play wise, and Madison’s got a pretty good shot and he’s good at getting the shot off.”