He's started five of the Wings' last six games and his play has injected a surge of confidence into the struggling team.

John Niyo and Ted Kulfan talk about the Red Wings at the midseason mark and what to look forward to in the second half of the season. The Detroit News

Detroit — This holds true with most NHL goalies, and apparently it certainly does with Jonathan Bernier.

Many goalies tend to play better when they’re in net more and used consistently and often.

Rare is the goalie who plays infrequently and can still post impressive statistics.

If you examine Bernier’s statistics, the more he plays — the better he plays. 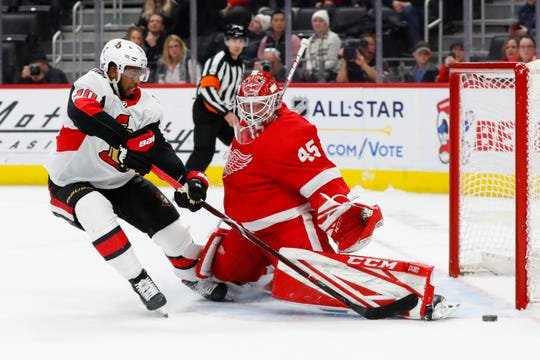 It’s certainly holding true this season, as Bernier continues to rebound from his less-than-stellar year with the Wings’ last season (9-18-5, 3.16 GAA, .904 save percentage).

“He’s done a great job, we’ve just built from him out confidence in our team,” said forward Dylan Larkin, who scored the lone goal in the shootout. “He’s really been a calming factor back there and made the saves he’s had to.”

Bernier has started five of the last six games, and saw the bulk of the work most of December as Jimmy Howard was recovering from an undisclosed injury.

With Howard (2-14-1, .884 save percentage) either hurt or struggling most of the season, Bernier has gradually taken on the greater workload.

“It’s just confidence, the more I play the more I feel confident,” Bernier said. “The better I see the puck. You try to reproduce that in practice but it’s hard to do when you don’t play for weeks.

Blashill alternated both goalies the first month of the season, but went to Bernier a bit more in November as he outplayed Howard.

Lately, Bernier’s workload has increased as his play has continued to give Wings opportunities for victories.

Over his last nine appearances, Bernier has a 5-3 record (one relief appearance), with a 2.09 goals-against average and .937 save percentage.

“The numbers say he is a better goalie when he plays more,” Blashill said. “That’s just the history of it. I would say that’s probably true of a lot of guys. It’s easier to get in a groove, easier to kind of keep rolling with it, and he’s done a good job.

“He had a tough start to his time here in Detroit last season, and at the beginning of this season. Neither one was probably what he wanted. But the thing about him is he keeps a positive attitude and keeps digging in and he works.

“That work is paying off.”

Larkin’s end-to-end rush, resulting in his 11th goal, gave the Wings a 2-0 lead and excited the crowd at Little Caesars Arena.

It’s a play Larkin — the goal happened to be the 99th of his career — is capable of because of his speed and stickhandling ability.

But though most fans would love to see Larkin try it more often, Blashill talked about how playmakers can’t execute that kind of rush consistently.

“You have to pick and choose your time, and it’s really hard,” Blashill said. “When you start winding up, people get in your way. The thing Dylan has learned over time is to not just rely on his legs and his speed, and to buy space and use others and do those kind of things.

“That’s (Friday’s goal) one of the things where he happened to get the right opportunity, and ice was available in front of him and he took it.

“But it’s not something, necessarily, that you can do on a regular basis because people will just take angles on you and end the play.”

…It was also the Wings’ first game that required overtime since Nov. 16 in San Jose.

…With two assists Friday, defenseman Filip Hronek has 25 points (8 goals, 17 assists) in 43 games. That surpasses the 23 points in 46 games Hronek had last season.

...Frans Nielsen, who has been fighting an illness, didn't skate Saturday but is expected to play Sunday against Buffalo.

...With a goal and assist Friday, Tyler Bertuzzi had his seventh multipoint game of the season and leads the Wings in goals (16) and points (34) and shares the team lead in assists (18) with Larkin.

Outlook: Buffalo (19-19-7) is coming off a 6-3 loss Saturday to Vancouver in which the Sabres allowed four third-period goals…The Sabres have only won three of their last 10 games (3-7-0)…C Jack Eichel (27 goals, 29 assists) and D Rasmus Dahlin (23 assists) form the nucleus of this improving team.