Detroit Red Wings defenseman Trevor Daley is open to be traded to a Stanley Cup contender, according to NBC analyst Pierre McGuire.

Detroit Red Wings forward Tyler Bertuzzi talks about the upcoming skills competition and 3-on-3 game at the NHL All Star Weekend in St. Louis, Mo. The Detroit News

Detroit Red Wings defenseman Trevor Daley is open to be traded to a Stanley Cup contender, according to NBC analyst Pierre McGuire.

"I talked to Trevor before the game last night and he said he would be amenable to being moved," McGuire said on Ottawa TSN 1200 on Thursday. 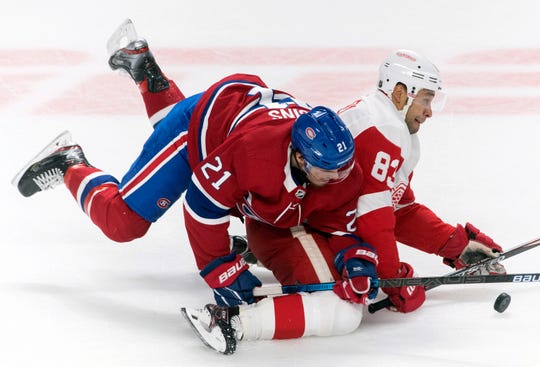 Daley, 36, is in the final year of a three-year contract worth $3,166,666 this year. He has four assists (including two assists in Wednesday's 4-2 loss against the Wild) in 26 games in an injury-riddled season.

"Trevor Daley has no time left on his contract and he's won two Stanley Cups both with Pittsburgh," McGuire said. "He was a really important part of those two Cup teams. He's more of a puck mover and a guy that can still jump into the rush. He had two assists last night and I thought he played a really solid game."

McGuire said Detroit's players and coaches are going through "an amazingly difficult exercise" with an NHL-worst record of 12-35-4.

"They know they're doomed in terms of where their season is going to be," McGuire said. "Most of them are trying to instill a certain brand of hockey that they want to play this year and Steve Yzerman has had a lot to say about that as he should."

McGuire said while this year's team is on pace for a historically bad season, he feels there is hope with potential prospects in the system.

"I think Detroit is going to turn the corner pretty quick when they do turn the corner," McGuire said. "If they win the lottery, they're going to get a generational player so that could really speed up the development.

McGuire said Zadina, who scored two goals against the Wild, is "still a one-dimensional player" and will likely be a 25-30 goal scorer.

"He had 44 goals in Halifax and you can usually translate those numbers, especially for a guy who can really hammer the puck," McGuire said. "It doesn't take him very long to get it off his stick. You're not taking that player for checking or to defend a lead or try to generate forecheck pressure. You're taking that player because he's a gunner on the power play and on five-on-five situations. He's not a complete player."