Anthony Mantha gave a glimpse into what his Christmas holiday was like – and it wasn’t great.

Detroit – Anthony Mantha gave a glimpse into what his Christmas holiday was like – and it wasn’t great.

Mantha revealed Wednesday he suffered a punctured lung after being thrown down by Toronto defenseman Jake Muzzin in their altercation Dec. 21.

And if that wasn’t enough, Mantha had a nasty flu a few days later.

“That’s what took six weeks to heal,” said Mantha of the punctured lung. “We didn’t want to risk that. It was probably the worst pain I’ve been in. On top of all that, I got the flu the second day of being injured. I had a 103-degree fever.

“It was a terrible first week.”

The news has gotten much better for Mantha in recent days. Even to the point Wednesday that he was not wearing an orange non-contact jersey for practice, and he could be in the lineup at some point next week.

“Hopefully it’s before the 15th,” said Mantha, talking about next Saturday’s game in Boston. “I’m going to have to get pushed in practice and see how it feels.”

Mantha said he passed a concussion test Tuesday, which was the final step to not needing the orange jersey.

With 12 goals and 24 points in 29 games this season, Mantha has been one of the Wings’ top offensive players. The Wings are suffering badly for offense, and coach Jeff Blashill will welcome Mantha’s return.

“He was our best offensive player at the beginning of the year,” Blashill said. “He can be an elite player in this league.

“Anthony is not going to come back and be the Anthony that he was at the beginning of the year right away. He had training camp to get ramped up. With this, it’s just walking in after being off a significant amount of time.”

Mantha was upset about Muzzin not being suspended for what Mantha felt was a slew-foot on Muzzin’s part, when throwing Mantha on the ice.

But you get the feeling, after listening to Mantha Wednesday, that the April 2 game in Toronto is already circled on Mantha’s calendar.

“It is what it is, and not every hit gets punished in this league,” Mantha said. “It’s part of the game, I guess. It was kind of slew-foot in my head and we need to move on.

The Wings called up defenseman Gustav Lindstrom and forward Taro Hirose from Grand Rapids, while placing forward Frans Nielsen and defenseman Mike Green on the injured list (retroactive to Jan. 20), in corresponding moves.

Lindstrom, a 2017 second-round draft pick, was paired with Trevor Daley during Wednesday’s practice and likely will make his NHL debut Thursday in Buffalo.

“It helps me a lot playing with him,” Lindstrom said. “It’s going to be fun. He has a lot of NHL games. I’ll just try to learn from him.”

Lindstrom has five points, all assists, in 45 games with the Griffins, with a minus-12 rating. 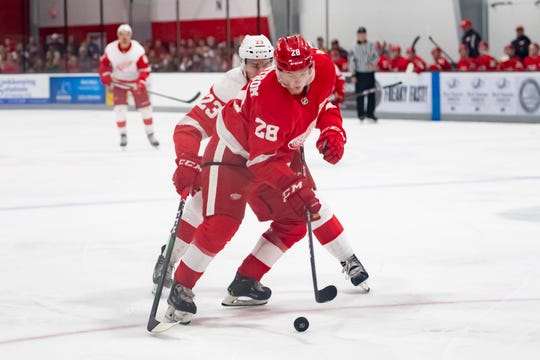 “Talking to those guys, everybody that has seen him, they’ve all been pleased with his play, he’s been one of the better defensemen on a nightly basis,” Blashill said. “They’re all cautiously optimistic he can come up and do a good job. He defends well, he passes the puck, and he competes.

“If you can defend well and pass the puck out of your zone – and we all know that’s been an issue for us – that helps you offensively.”

Lindstrom received the call over defenseman Moritz Seider, although it sounds as if Seider will get a look before the NHL season is done.

“Right now, we wanted to leave Seider where Seider is,” Blashill said. “He’s a first-year pro and so, at this time, as we stand here today, we’re going to let him continue to play.”

“The thing about Taro is, he’s good defensively and he makes smart decisions and we could use more good decisions on the ice,” Blashill said.

With no goals in the last two games, Blashill shuffled lines for Wednesday's practice.

Dylan Larkin was between Darren Helm and Robby Fabbri, while Valtteri Filppula centered Tyler Bertuzzi and Justin Abdelkader. Luke Glendening was between Hirose and Andreas Athanasiou, while the fourth line had Christoffer Ehn between Givani Smith and Adam Erne.

"We've had no offense the last couple of games, although we've had chances," Blashill said. "I would like to get some guys going at a high level, so you hope by switching lines you can get guys going a little more."

Outlook: The Sabres (23-23-7) are coming off an ugly 6-1 loss Thursday against Colorado, getting booed off the ice. … Buffalo is likely to miss the playoffs for a ninth consecutive season. … C Jack Eichel (31 goals, 66 points) has been a force offensively.