Madison Bowey was back at practice Monday, skating and playing hockey, and relieved he escaped a potentially serious injury.

Detroit – Madison Bowey was back at practice Monday, skating and playing hockey, and relieved he escaped a potentially serious injury.

Bowey took a stick to the eye during Friday’s loss to the Blue Jackets, which impacted his vision most of the weekend. 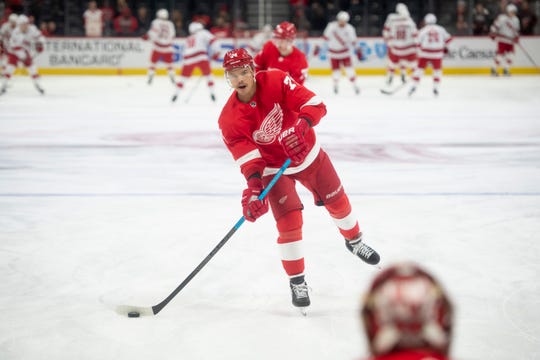 It was a bit scary, to be sure.

“When it first happens, usually I’ve gotten gloved or poked in the eye, and the vision comes back right away,” Bowey said. “But after it wasn’t coming back for an hour, I started getting concerned. Luckily I got to the optometrist right away during the game and he said it was a little contusion on my cornea and those kind of heal in 2 to 4 days.

Bowey and coach Jeff Blashill both felt Bowey would be cleared for game action Tuesday in Buffalo.

“It feels just like kind of something is in my eye,” Bowey said. “For the most part, the vision is back and it feels good. We’ll just keep the program we’re doing now and hopefully it keeps getting better every day.”

Still, the 24 hours after the game certainly gave Bowey a deeper appreciation of his vision.

“That full day (Saturday) was pretty foggy, and it’s kind of like I’ve never had this in my life,” Bowey said. “Luckily my mother is an optician so she’s around eye doctors all the time and kind of told me what they were saying and passing messages along that it’s a 2-to-4 day thing, and it’s been healing well.

“For sure, even like grocery shopping, it was tougher just to see what I’m getting and just little things for sure. You appreciate it a lot, and I’m definitely lucky it’s not as bad as it could have been.”

There are a lot of unknowns regarding the Red Wings lineup heading into Tuesday’s game in Buffalo.

The Wings had an optional skate Monday, and many players stayed off the ice, given Detroit's schedule this week. After Tuesday's game the Wings play Thursday in New Jersey, Saturday in Boston and Sunday in Pittsburgh.

The Wings will get forward Anthony Mantha (punctured lung) back in the lineup Tuesday, but the status of forwards Robby Fabbri (jaw), Darren Helm (undisclosed) and Frans Neilsen (upper body) are unknown, said Blashill.

Mantha is excited to play his first game since getting hurt Dec. 21 in Toronto.

“I feel great,” Mantha said. “It’s where it’s supposed be right now. (But) it’s a lot quicker out there, and the game is faster and you need to be ready mentally.”

Blashill is tempering expectations for Mantha, who missed weeks with a knee injury before playing four games, then suffering the injury in the Toronto game.

“The first part of the year he was our best offensive player, most dynamic, had a great start to the year,” Blashill said. “Then he got hurt, came back and played four games, and got hurt again and was never able to get back going.

“It feels good to get Anthony back but with that said, we have to be realistic in the sense he’s been out for a long time. If you combine the two injuries, we have to understand he’s going to have some ups and downs, and to get going full speed it’s going to take some time.”

The Wings are in the midst of eight games in 13 days, and Blashill and his staff are attempting to find the right balance between rest, practice and playing games.

“It’s always tricky in this league and super tricky now,” Blashill said. “There’s a balance between between energy, rest, saving energy, and structural play, habits, those kind of things. It’s a huge balance.”

The Wings had back-to-back games, and three in four nights, coming out of the All-Star break, and looked like a tired team in that third game.

Blashill felt the optional skate Monday was the best strategy, while keeping many players who’ve played big minutes off the ice.

… Defenseman Gustav Lindstrom appears likely to stay with the Wings through this four-game road trip. The rookie has been impressive in his call-up from Grand Rapids.

“He’s come in as advertised,” Blashill said. “His strengths are his smarts, competitiveness, and ability to pass the puck. The game of hockey is super fluid and chaotic and you need guys that can make decisions on the ice.

“He makes a lot of good decisions.”

Outlook: The Red Wings return to Buffalo after defeating the Sabres Thursday, 4-3, in a shootout. … The Sabres (24-24-8) are coming off a discouraging 3-2 home loss Sunday against Anaheim. … C Jack Eichel (31 goals, 69 points) is the bright spot right now.