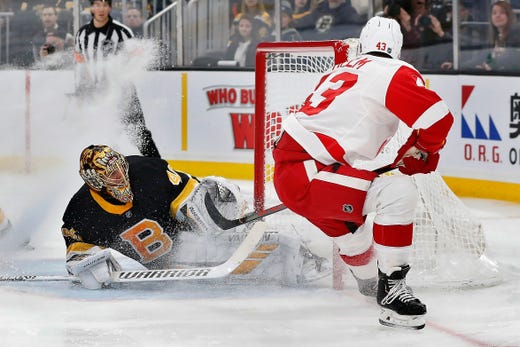 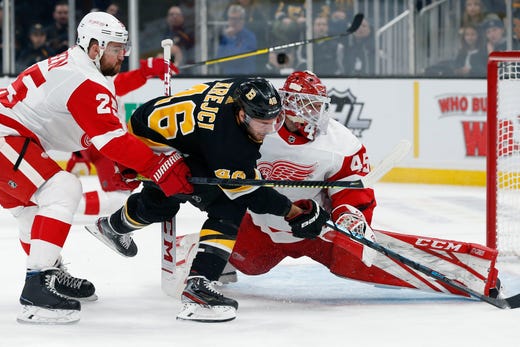 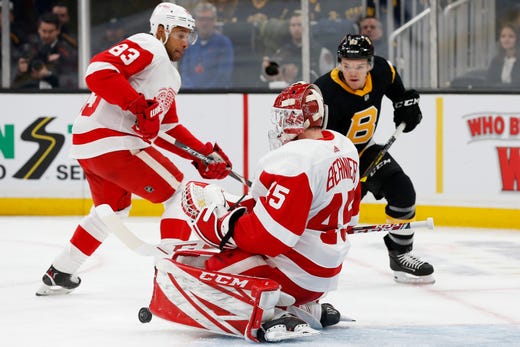 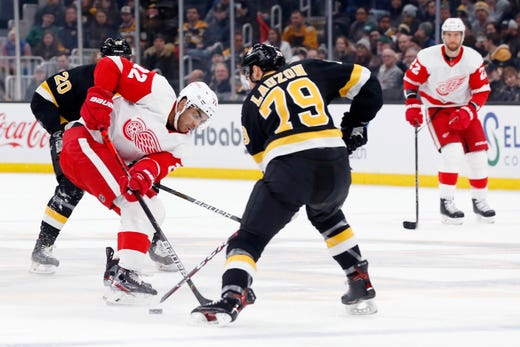 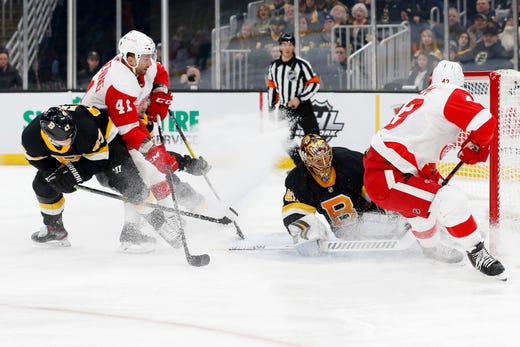 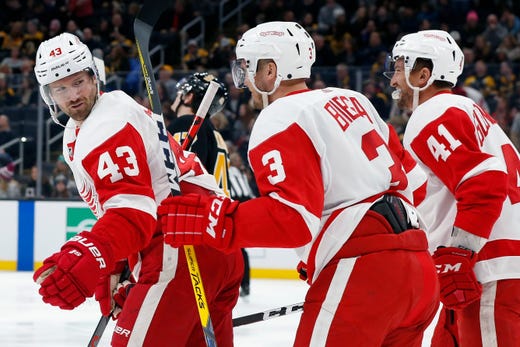 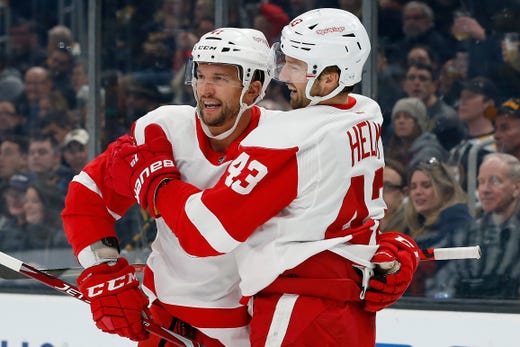 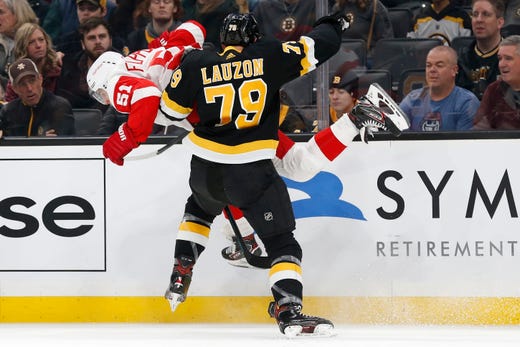 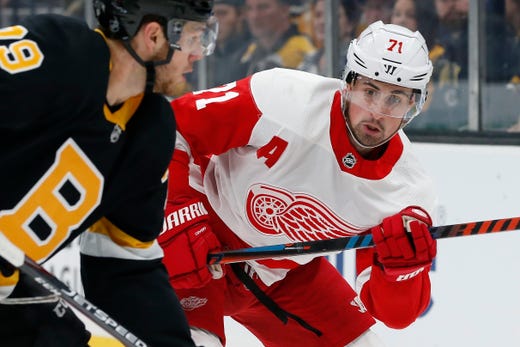 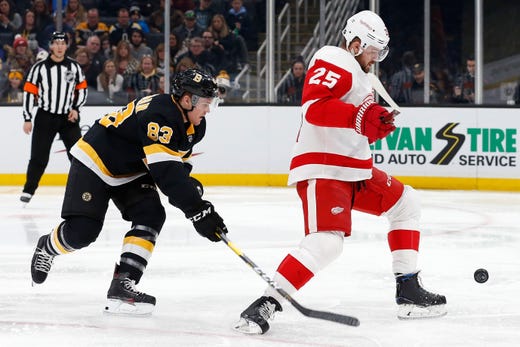 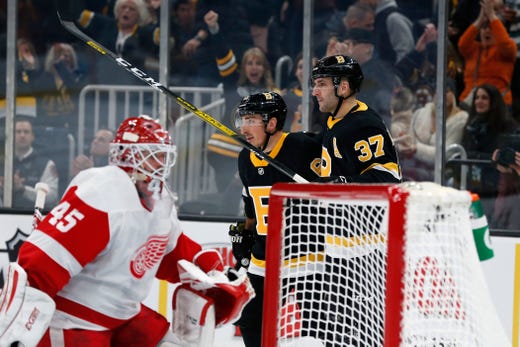 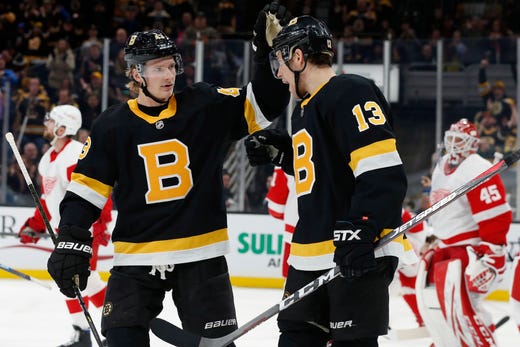 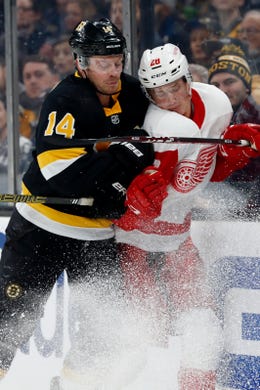 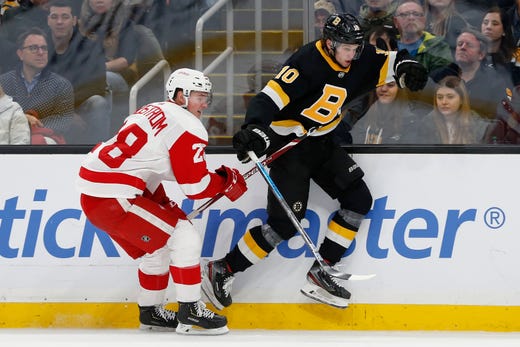 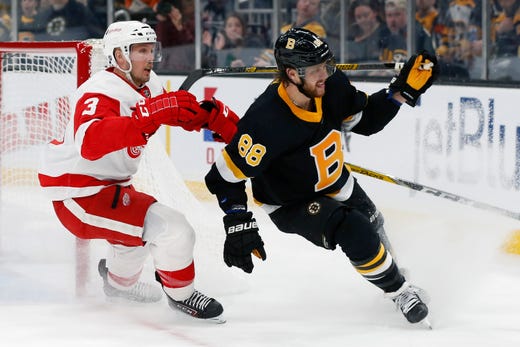 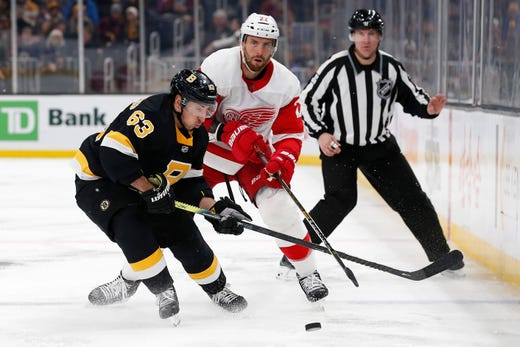 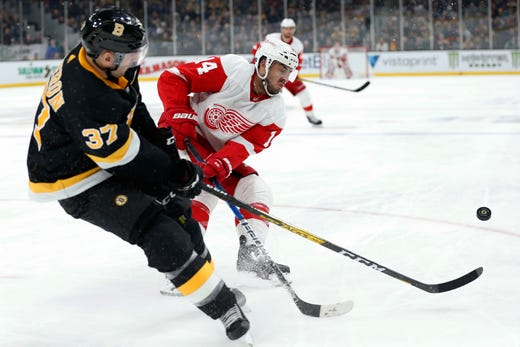 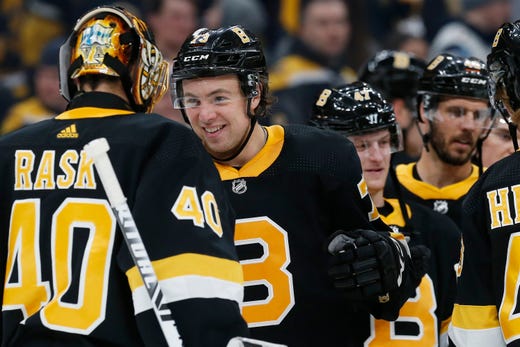 Boston — It had to happen eventually — the Red Wings finally lost to the Boston Bruins.

Sure, the Bruins entered Saturday’s game with the most points in the NHL (now with 84), and have All-Stars and league leaders sprinkled throughout their lineup.

The Red Wings had beaten them five straight times. Until Saturday’s 4-1 loss to Boston, that is. 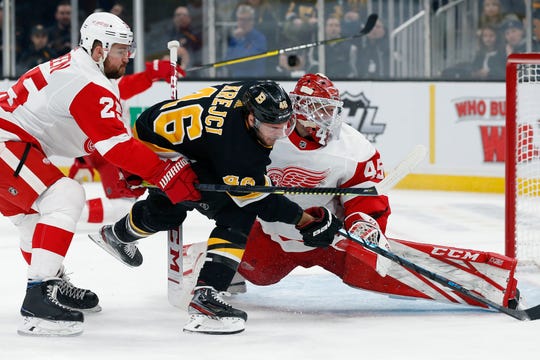 The Wings held a 1-0 lead after one period — on Darren Helm’s short-handed goal, putting back his own rebound off a 2-on-1 rush — and goaltender Jonathan Bernier was looking impenetrable.

Then, it happened again. An opponent, this time Boston, scored three times in a matter of 4 minutes, 29 seconds, and the game completely changed.

“We made it too easy for them,” forward Frans Nielsen said of the Bruins’ second-period eruption. “They got chances off turnovers, and it’s a great team (Boston) but they have to at least work for their chances out there.

“Bernie had a great game, by far our best player on the ice, and we still let up four (goals).”

Coach Jeff Blashill put the Wings through a rugged practice Friday after a sub-par effort in a loss in New Jersey.

The message from Blashill, for the most part, was delivered.

“We know we weren’t good enough, and the compete level wasn’t high enough in Jersey,” forward Luke Glendening said. “We have to find a way to compete every shift and there can’t be any quit.”

After a disappointing effort in Jersey, coach Jeff Blashill was pleased Saturday in Boston despite another loss. The Detroit News

Blashill felt the compete level was fine — “It wasn’t for lack of compete,” he said — but losing puck battles in the offensive zone and on the power play hurt the Wings.

“We have to make sure we bear down in those areas,” Blashill said. “We shot ourselves in the foot in the second (period).”

With general manager Steve Yzerman along on this trip, what with the trade deadline rapidly approaching (Feb. 24), players could be playing for their Red Wings’ future.

The Wings had two consecutive power plays late in the second period, but couldn't inch closer.

The power play was scoreless in three attempts, and the lack of quality chances had Blashill mulling changes.

“A lack of execution,” Blashill said of what hurt the power play. “Those guys have to be way better, we don’t have other guys to put out there. At some point, we have to be way better. It was just lack of poise with the puck, lack of compete, not at the level of desperation you need to have.”

David Pastrnak finished the scoring with his NHL-leading 42nd goal in the third period off a dazzling set up by Marchand.