General manager Steve Yzerman had a reputation of being an aggressive executive when he was in Tampa.

Andreas Athanasiou's two third-period goals led the Wings to a 4-3 victory over the Canadiens. The Detroit News

Detroit – The NHL trade deadline in Detroit just isn’t what it used to be.

When the Red Wings were consistent contenders for the Stanley Cup, fans were eager with anticipation about which veteran would be brought in to boost Detroit’s championship chances.

Now the Wings are the worst team in the NHL, and the trade deadline around here is all about subtracting veterans, not adding them, as the Wings will miss the playoffs for the fourth consecutive season.

General manager Steve Yzerman had a reputation of being an aggressive executive when he was in Tampa, making bold acquisitions at the trade deadline to strengthen the Lightning.

Tampa never did win a Stanley Cup, but the roster remains among the strongest in the NHL – and will likely be for another several years.

With the Wings, Yzerman has few marketable pieces to deal before Monday’s deadline.

Because of sub-par, injury-plagued seasons, the few potential unrestricted free agents the Wings have to deal as rentals – defensemen Mike Green and Trevor Daley, and goaltender Jimmy Howard – aren’t likely to be desirable.

Instead, Yzerman might decide to deal players under team control who could bring back valuable draft picks for the Red Wings in their rebuild.

Here are some Red Wings players who could be moved before Monday’s 3 p.m. trade deadline:

►F Andreas Athanasiou (pending restricted free agent, $3 million salary cap hit): Athanasiou has five goals in his last six games, including two in Tuesday’s rally victory over Montreal. He scored 30 goals last season, and only has 10 so far, and the Wings don’t appear to be interested in a long-term contract. If Athanasiou is going to go on one of his patented hot streaks, a playoff team such as Colorado or Edmonton would be smart to acquire him. There’s still untapped potential.

►D Mike Green (pending unrestricted free agent, $5.35 million cap hit): Green earned his 500th career point in Tuesday’s victory, a testament to his offensive ability. Green is one of many Wings’ who has had a disappointing season. But given his experience, power-play skills on a good team, offensive ability, it wouldn’t be shocking to see a contender give Yzerman a draft pick in the range of the third to sixth round.

►D Trevor Daley (pending unrestricted free agent, $3.17 million cap hit): Staying healthy has been a difficult task for this proud veteran, who won two Stanley Cups in Pittsburgh. Injuries have derailed his last two seasons, but maybe some team in need of depth would be interested in giving Daley one more crack at a Stanley Cup for a conditional draft pick. 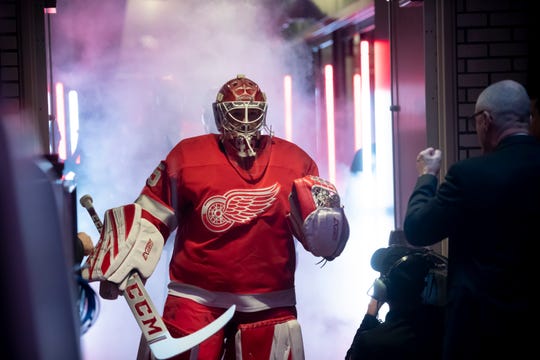 ►G Jonathan Bernier (signed through 2020-21, $3 million cap hit): It’s unlikely the Wings would deal Bernier, given they’re not likely to bring back Jimmy Howard, so that would force the need to get two goalies in the offseason. And Bernier has arguably been the Wings’ best player over the last month or two. But Colorado, in particular (where Bernier last played before signing with Detroit), has been hit with injuries in its goaltending, and Bernier could fetch the Wings’ a high-round draft pick. The Wings would have to consider it.

►F Luke Glendening (signed through 2020-21, $1.8 million cap hit): Nearly every playoff contender would love to add Glendening, given his defensive ability, penalty killing, and leadership and character. And that cap hit is extremely manageable. Glendening has grown into a valuable asset on and off the ice for the Wings, so it would take a huge offer for the organization to be swayed.

►F Darren Helm (signed through 2020-21, $3.875 million cap hit): Helm is having one of the better all-around seasons on the Wings, but it’s likely he’ll be a more tradeable asset next year. The way Helm is playing, he’d be a difficult player for the Wings to replace, as he can fill so many roles.

►F Evgeny Svechnikov (pending restricted free agent, not waiver-exempt anymore next season): His future with the Wings looks hazy. Svechnikov has yet to show he’s an NHL regular, and last year’s severe knee injury may have set him back. Maybe he’s part of a package, or possibly traded for another young player looking for a new start.

►G Jimmy Howard (pending unrestricted free agent, $4 million cap hit): Nobody could have imagined Howard going through such a miserable season (2-22-2, 4.08 GAA, .886 SVS). Teams have plenty of other better options.