Former Red Wings forward Pete Babando, the first player in NHL history to score an overtime goal in Game 7 of a Stanley Cup final, died on Wednesday. He was 94. 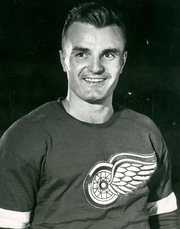 Former Red Wings forward Pete Babando, the first player in NHL history to score an overtime goal in Game 7 of a Stanley Cup final, died on Wednesday. He was 94.

The Red Wings made the announcement on Twitter on Thursday night. "We would like to extend our sincere condolences to all of Pete’s family and friends during this difficult time," the team said in a statement.

Babando scored at the 8:31 of double overtime to beat the New York Rangers 4-3 in the seventh and deciding game of the 1950 final.

In 351 career games with the Red Wings, Bruins, Blackhawks and Rangers, Babando  had 86 goals and 159 points. He retired in 1967 after spending six seasons with the Clinton Comets of the Eastern Hockey League.