Jordan Eberle scores three times in a 4-1 Islanders' victory as the Wings will miss the postseason for a fourth consecutive season.

Dylan Larkin felt his line was part of the problem early on in the Red Wings' loss. The Detroit News

Uniondale, N.Y. —  This has pretty much been known since in the opening weeks of the regular season, but Friday it became official.

The Red Wings aren’t going to make the playoffs — for a fourth consecutive season.

They were officially eliminated — yes, on Feb. 21, a few days before the trade deadline even — with a 4-1 loss to the New York Islanders.

The Red Wings fell to 15-44-4 on the season. The maximum they can get this season would be 72 points — which eight teams in the East have already surpassed.

So, it'll be another spring home for the Red Wings.

“It sucks to be in this spot, where you’re eliminated this early,” coach Jeff Blashill said. “There’s no other word to describe it other than it sucks, and that’s a fact.”

But what bothered Blashill, even more, was a slow start by the Wings, including getting outshot 13-2 in the first period. 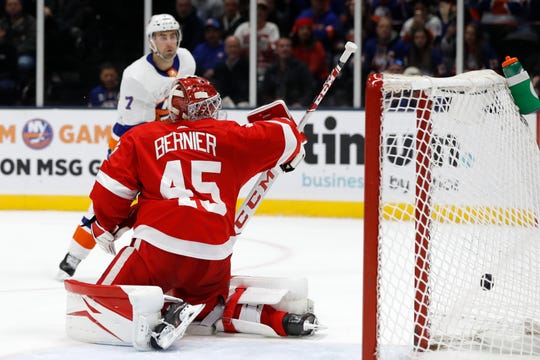 “What stings to me is we didn’t have enough guys showing up in the first period, that’s what stings for me,” Blashill said. “The elimination from the playoffs is what it is. What my focus for a long time (has been), since the beginning of the year, is to make sure we’re pushing to be better, that there’s a better future.

“Part of that is having an understanding of what it takes to every single night, and we have to be better than we were to start the game.”

One of the facts about this difficult season is this group still has a lot of learning to do at the NHL level. 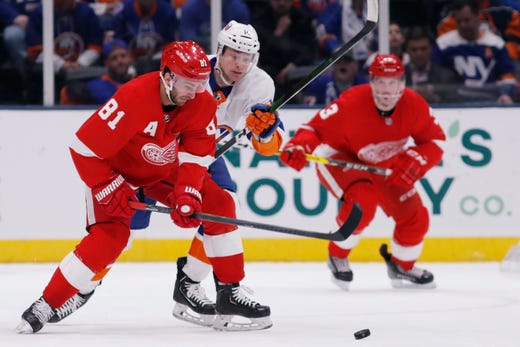 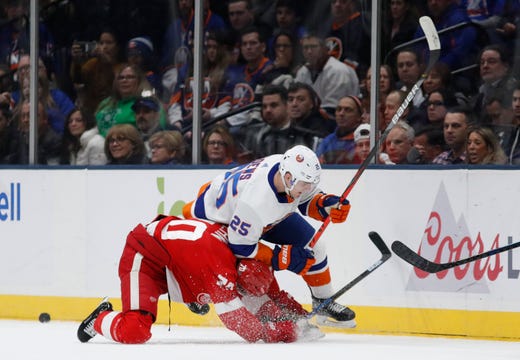 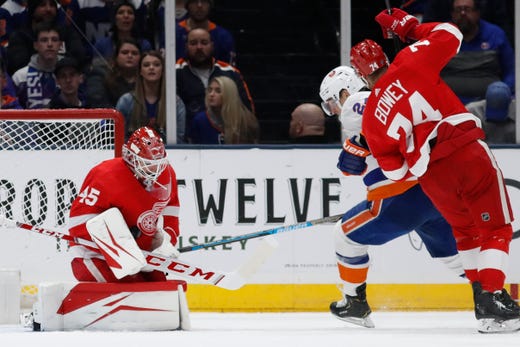 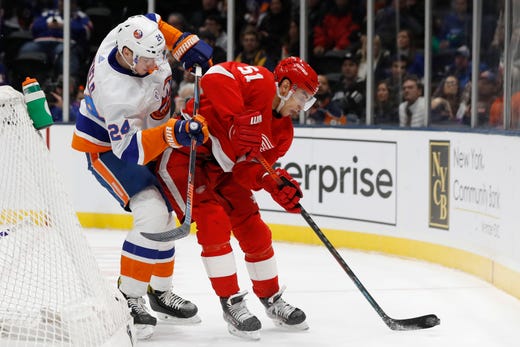 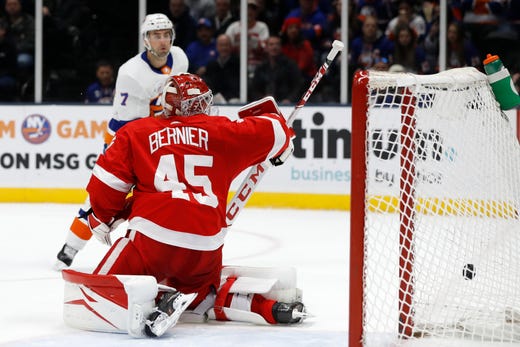 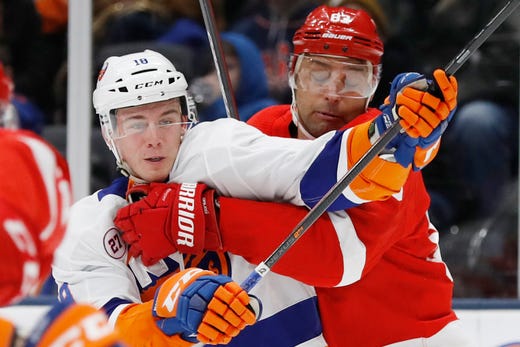 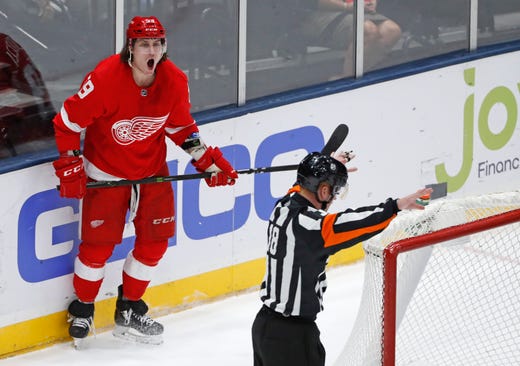 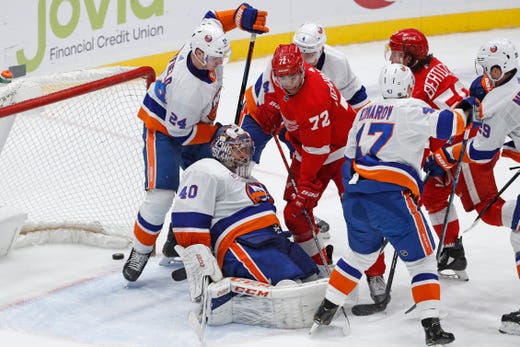 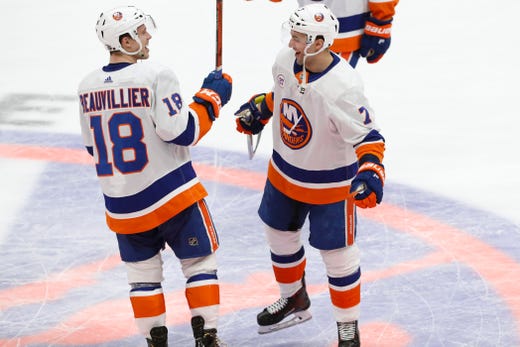 The retirements of Pavel Datsyuk, Henrik Zetterberg and Niklas Kronwall in recent years have left this roster learning on the fly.

“You ripped the Band-Aid off (with those veterans retiring) and by that, I mean those guys, on a night like tonight, a Zetterberg would have carried the team and would have masked somebody not being quite as ready,” Blashill said. “It’s hard to be a real good player in this league, you have to show up like crazy every night, you’re not going to out-skill people ever, so when you lose Pav, and Z and Kroner, now it’s sink or swim and we’ve probably sank too many nights.

“But we have to keep finding ways to learn how to swim on a nightly basis.”

Of the four consecutive playoff misses, this has already been the most difficult season, with the Wings headed to the NHL’s worst record.

And possibly, one of the worst records in the salary cap era (since 2006).

“It’s been tough,” forward Frans Nielsen said. “We’re all here because we like competing. We like to win. It’s just been a long year, but we are trying and doing a good job and trying to have fun and stick together. We come to work every day and work hard and trying to keep our head high.

Anthony Mantha's power-play goal, his 13th goal, at 17 minutes, 25 seconds of the third period cut the lead to 2-1 — moments after an apparent Tyler Bertuzzi goal was waved off because the referee blew the play dead by losing sight of the puck. 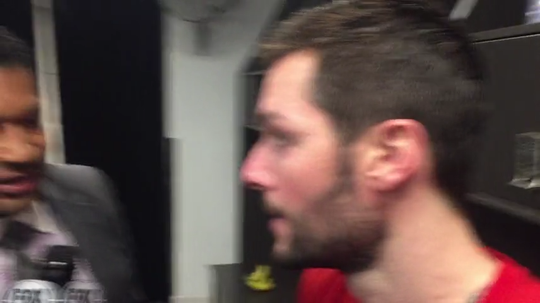 Goaltender Jonathan Bernier talks about the Red Wings' slow start in a 4-1 loss to the New York Islanders. (Photo: PDTN)

But a Dylan Larkin tripping penalty off the draw put the Wings shorthanded, and Jordan Eberle capped a three-goal night with 36 seconds remaining, Eberle's 13th goal.

“I cost us the game there, bad play by me,” said Larkin of his penalty. “To get my stick in there, no need for that really when the puck is there. It doesn’t affect the play, doesn’t stop a goal. Needless penalty by me.”

Goaltender Jonathan Bernier made 36 saves and kept the Wings close, despite Islanders outshooting the Wings 40-22, but there wasn't nearly enough offensive push.

Islanders goalie Semyon Varlamov only had to make 21 saves, including a grand total of two in the first period.

“We didn’t come out the way we wanted, for sure,” Bernier said.

Similar to Tuesday against Montreal, the Wings’ work ethic wasn’t nearly good enough. But unlike that game, in which the Wings’ rallied and earned a victory, Friday’s result was much different.

“It’s an everyday league and you have to come out and be at your very best,” Blashill said. “Us especially, we have to outwork teams and out-compete them to have any opportunity to win. In the first (period), we didn’t do that at all.”