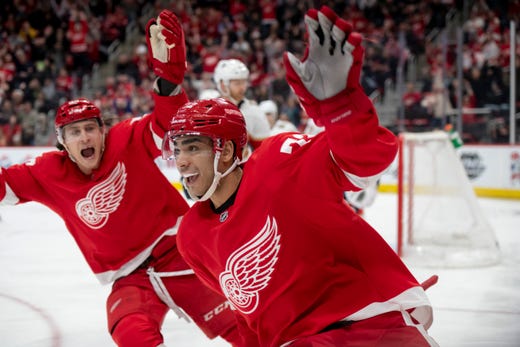 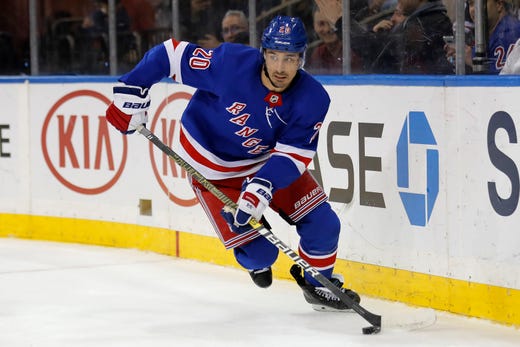 1. Chris Kreider, left wing, N.Y. Rangers: The Rangers wouldn’t mind keeping him, and are still negotiating with Kreider, who has 24 goals (45 points) through Wednesday and blends a mixture of size and skill. Kreider has positioned himself for a nice contract this summer with a big offensive season. Adam Hunger, Associated Press
Fullscreen 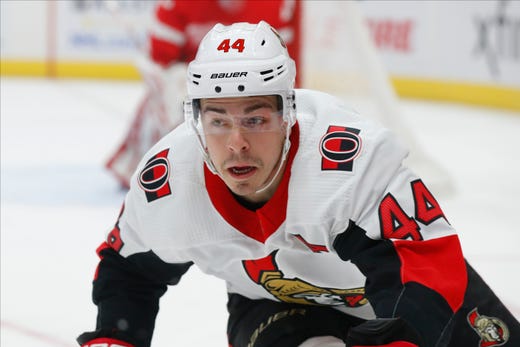 2. Jean-Gabriel Pageau, center, Ottawa: He’s having a career year with 24 goals through Wednesday, and is regarded as a solid two-way player. A contender really has to think about what they’re giving up, as this season for Pageau is a bit of an outlier. Paul Sancya, Associated Press
Fullscreen 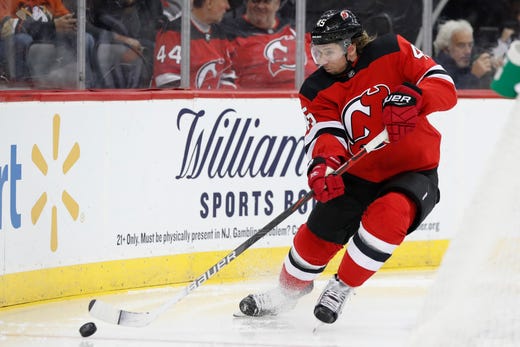 3. Sami Vatanen, defenseman, New Jersey: Arguably the best defenseman left available, Vatanen is currently on injured reserve, but is expected to return soon. The Devils should get a lot of phone calls by Monday afternoon. Kathy Willens, Associated Press
Fullscreen 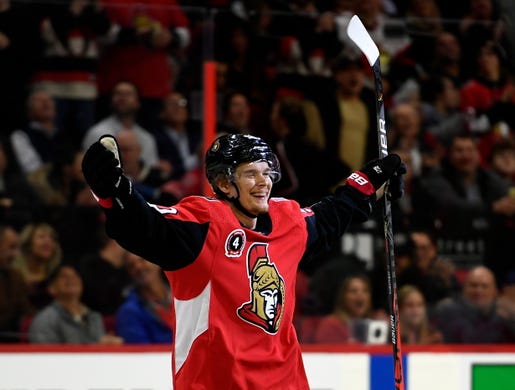 4. Vladislav Namestnikov, LW, Ottawa: A rental with sneaky good offensive skills, Namestnikov could become a valuable addition for a contender. The Senators will get draft picks for this solid pro. Justin Tang, Associated Press
Fullscreen 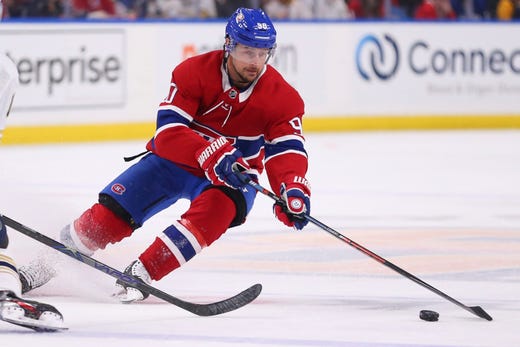 5. Tomas Tatar, LW, Montreal: You hear Tatar’s name popping up more since Montreal continues to sink. There’s a year left on his contract, so that’s added enticement for a proven, capable scorer (though, not as much in the playoffs). Jeffrey T. Barnes, Associated Press
Fullscreen 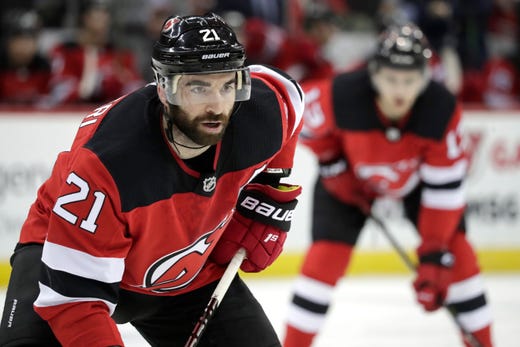 6. Kyle Palmieri, right wing, New Jersey: The Devils seem to be in extreme selling mode, and Palmieri is a great bargaining chip. He has another year on a moderate-size contract ($4.6 million) and is a reliable 20-goal scorer. It would take a minor haul going New Jersey’s way to acquire Palmieri. Julio Cortez, Associated Press
Fullscreen 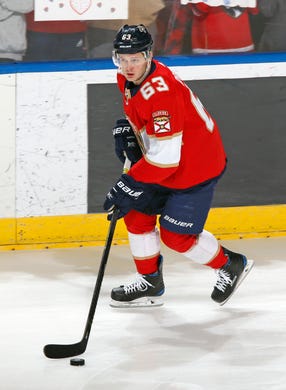 7. Evgenii Dadonov, RW, Florida: Dadonov is in play, but only slightly. The Panthers are in and out of the playoff picture daily, and have to listen about offers for the potential unrestricted free agent. But, ultimately, Dadonov is too valuable for the current Panthers’ playoff chase. Joel Auerbach, Associated Press
Fullscreen 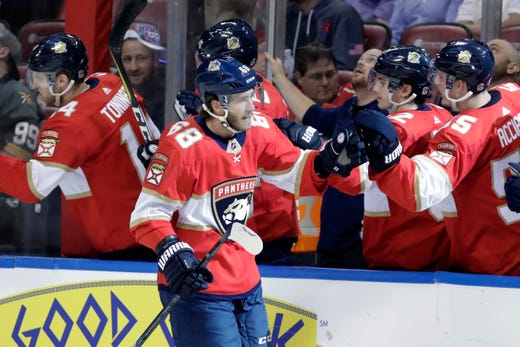 8. Mike Hoffman, RW, Florida: Same situation, basically, as his teammate Dadonov. The Panthers have to listen to any offers, but it would take a special deal to get this goal-scorer. Still, they seem to be more inclined to move Hoffman, if need be. Lynne Sladky, Associated Press
Fullscreen 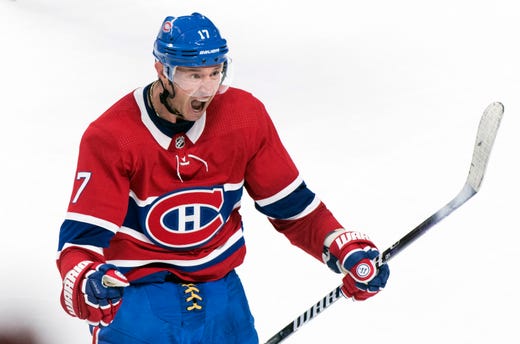 9. Ilya Kovalchuk, LW, Montreal: Kovalchuk has resurrected his career with the Canadiens, after getting bought out in-season by Los Angeles. He’s played so well, though, the Canadiens are tempted to keep him. Graham Hughes, Associated Press
Fullscreen 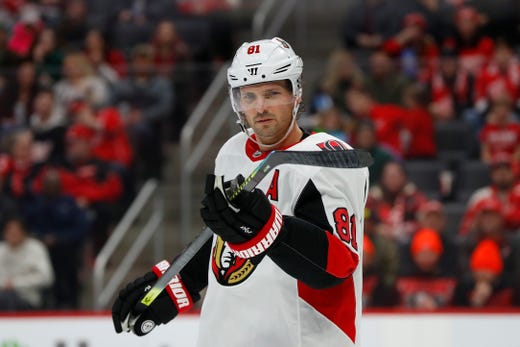 10. Ron Hainsey, D, Ottawa: A safe, experienced, dependable option for a contender looking for a veteran defenseman to provide depth for a playoff run. Hainsey has been through this stuff before. Paul Sancya, Associated Press
Fullscreen 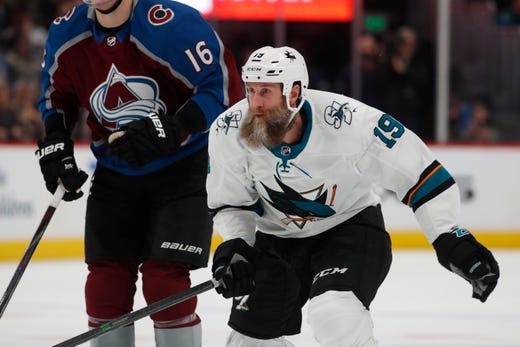 11. Joe Thornton, C, San Jose: Thornton appears to want to stay in San Jose, but in what could be his final season, wouldn’t a Stanley Cup playoff chase be tempting? David Zalubowski, Associated Press
Fullscreen 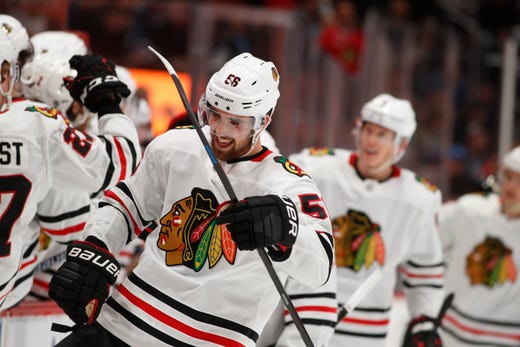 12. Erik Gustafsson, D, Chicago: With the Blackhawks tumbling out of the playoff picture, Gustafsson becomes a rental who can provide depth to a contender for not too steep a price. David Zalubowski, Associated Press
Fullscreen 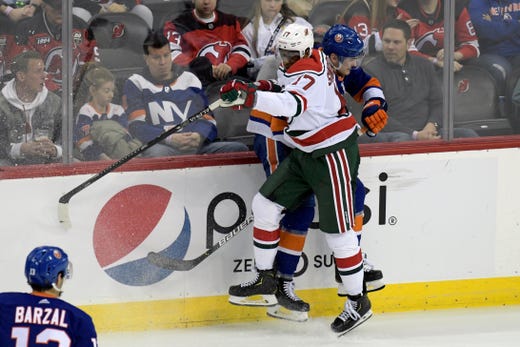 13. Wayne Simmonds, RW, New Jersey: A rental who has playoff experience, adds character, and can be an effective net-front presence. Probably won’t take a lot to get Simmonds, either. Bill Kostroun, Associated Press
Fullscreen 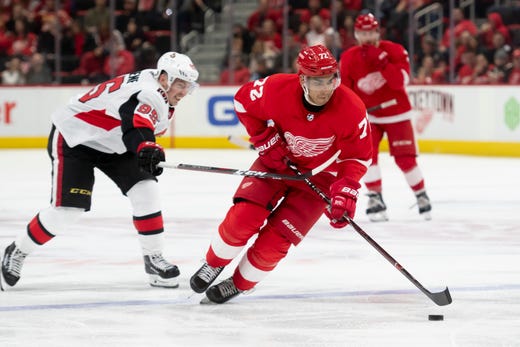 14. Andreas Athanasiou, LW, Detroit: Has gone through a dismal season, but Athanasiou might be finally warming up offensively. A 30-goal scorer last season who could thrive in the right setting. David Guralnick, Detroit News
Fullscreen 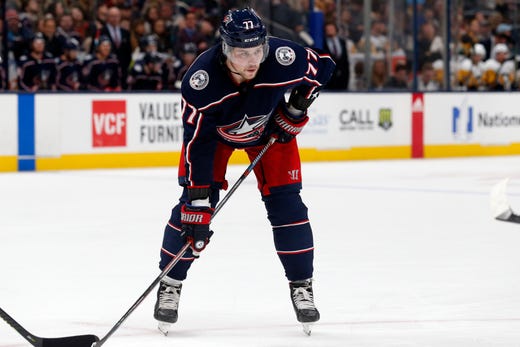 15. Josh Anderson, RW, Columbus: Similar to Athanasiou, Anderson has had a terrible season and is currently hurt. But he’s a big winger with untapped potential, and simply might need a fresh start. Paul Vernon, Associated Press
Fullscreen 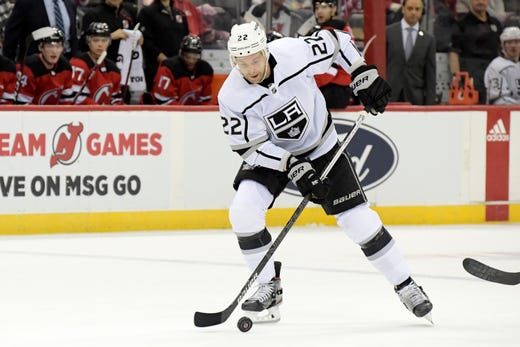 16. Trevor Lewis, RW, Los Angeles: Not a bold headline acquisition, but his is the type of rental that could really help a contender under the radar. Lewis is a dependable bottom-six forward with experience. Bill Kostroun, Associated Press
Fullscreen 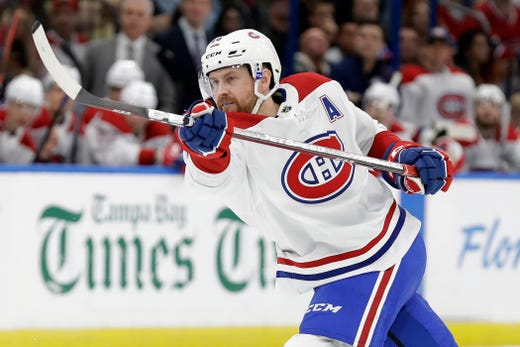 17. Jeff Petry, D, Montreal: Petry (Orchard Lake St. Mary/Michigan State) has another year left on his contract, which makes it unlikely Montreal would trade him. Otherwise, Petry would be near the top of this list. But if the Canadiens are interested in tearing their team down, teams might be willing to offer big for this fine all-around defenseman. Chris O'Meara, Associated Press
Fullscreen 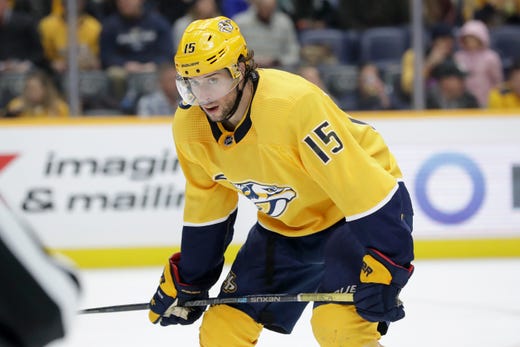 18. Craig Smith, RW, Nashville: Smith has never quite lived up to his potential, and is a rental who could ignite a team. But the Predators are still in the playoff mix, and are likely to keep him around. Mark Humphrey, Associated Press
Fullscreen 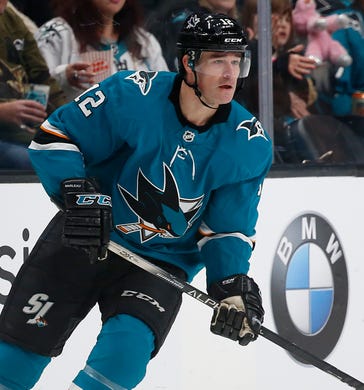 19. Patrick Marleau, LW, San Jose: Like his teammate Thornton, Marleau is in the final days of his career. It’s doubtful he’d even agree to be moved at this point, having returned to San Jose this season to bookend his career. Josie Lepe, Associated Press
Fullscreen 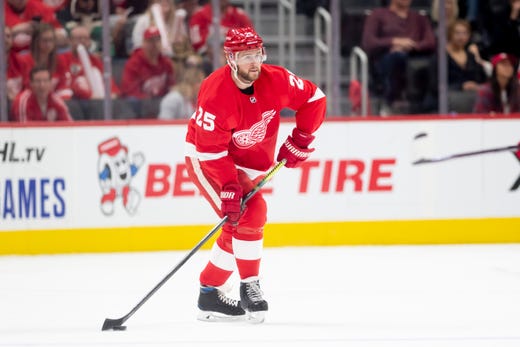 Detroit — Is there more to come for the Red Wings on trade deadline day?

They got an early start in the wee hours Monday morning, dealing defenseman Mike Green to the Edmonton Oilers for forward Kyle Brodziak and a conditional draft pick in either 2020 or 2021. 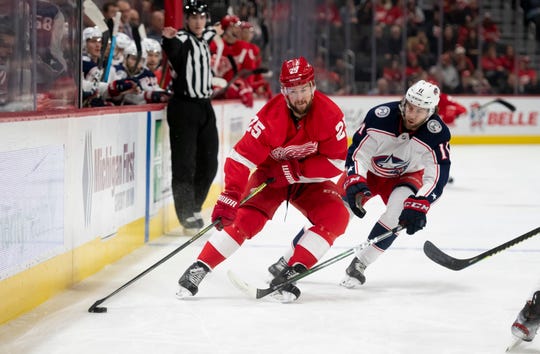 The draft pick will be Edmonton’s 2020 fourth-round selection for the Red Wings — unless the Oilers reach the Western Conference finals and Green plays in half of Edmonton’s games. If that happens, it becomes Edmonton’s 2021 third-round draft pick.

The NHL trade deadline is 3 p.m., with the Wings’ general manager Steve Yzerman rumored to be in discussions for potential deals regarding forward Andreas Athanasiou, and possibly defenseman Trevor Daley.

Green is one of the players who attracted increased attention in recent days, as all veteran defensemen on expiring deals tend to do as the deadline nears.

Staying healthy has been an issue for Green, 34, who has played 48 games this season. Green has struggled offensively with only 11 points (three goals), with a career-worst minus-32 plus-minus rating.

But Green’s offensive ability, and capabilities with the puck, could fit nicely with Edmonton’s young goal-scorers.

"Thank you @DetroitRed Wings for the past five years," Green tweeted Monday. "I"m deeply grateful; it was an honor to play for the winged wheel. To all the fans that make Detroit hockey town — I say thank you, kindly."

Thank you @DetroitRedWings for the past five years. I’m deeply grateful; it was an honor to play for the winged wheel. To all the fans that make Detroit hockey town - I say thank you, kindly. pic.twitter.com/lNUjfwGGSJ

To make salaries fit under the salary cap, the Red Wings will retain half of Green’s remaining salary cap hit ($2.687 million) and took on Brodziak’s contract.

Brodziak, 35, in the final year of his $1.15 million contract, retired because of a back injury in September. But the Wings needed to accept Brodziak’s contract to make the deal work for both sides financially under the salary cap.

Green waived his modified no-trade clause to make the deal go through.

Green and Athanasiou were both held back from Sunday’s lineup, as the Wings protected potential assets that could be dealt.

Athanasiou, 25, is a restricted free agent this summer, and could be an intriguing fit for a contender looking for an asset that would stay for more than one season.

Daley, 36, is like Green, an unrestricted free agent this summer. A pure rental, Green has been on two Stanley Cup teams in Pittsburgh, and would add valuable depth to a contending team.