Blashill is in his fifth season as Wings' head coach and it this will mark the fourth straight season the team missed the playoffs.

Detroit — The final decision will be made after the regular season ends for the Red Wings.

But at his news conference Monday detailing the Wings' activity at the trade deadline, general manager Steve Yzerman gave an endorsement of the work by coach Jeff Blashill and Blashill's staff.

There have been eight NHL coaches fired this season, and the Red Wings have, by far, the league's worst record (15-45-4). 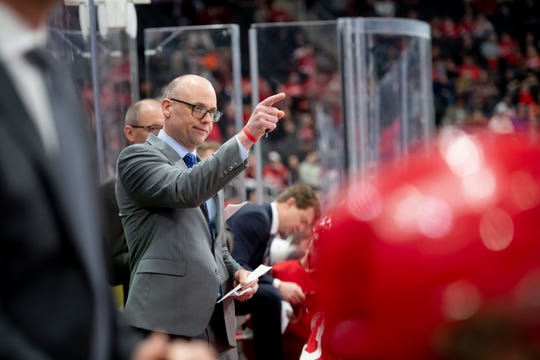 But Blashill shouldn't be judged by the team's record, said Yzerman, who felt Blashill has done as good a job as possible under the circumstances.

“I’m not going to make any decisions on anything until the season is over,”  said Yzerman, of possibly retaining Blashill for next season.  “We’re going to sit down and go over it, but Jeff has done a good job. I’ve enjoyed working with him and as of right now, I don’t plan to make a change, so you read into that what you want.”

Blashill is in his fifth season as Wings' head coach, and this will be the fourth consecutive season the Wings will miss the playoffs.

Blashill is under contract for this season, with the Wings holding the option for next season to bring him back.

"When I came in last summer we talked about our team, what my expectations were,” Yzerman said. "A lot of things would have to go right for us to be a playoff team and a lot of things went wrong that we didn’t necessarily perceive whether it be injuries or what not. It’s unfair to judge Jeff Blashill on our team’s record. I put this team together, I had expectations for the year. I don’t think this is a playoff team, honestly.

"Jeff has done a very good job, he and his staff, with these players. It's been a very difficult season and they've managed it very well, coached the team very well. under difficult circumstances."

The Red Wings sent defenseman Gustav Lindstrom to Grand Rapids Monday, but that was simply a paper transaction to make Lindstrom eligible for the American League playoffs if the Griffins qualify.

The Wings will recall Lindstrom quickly, with Yzerman adding his praise to how Lindstrom has played in 10 games with the Wings.

"I'm real pleased with how he's done through the season in Grand Rapids, and we've brought him up here and he's done real well," Yzerman said. "He has a lot to learn but he's a smart kid, a smart hockey player, and very competitive.

"He's more than held his own, so we're very pleased."

Forward Sam Gagner is the player the Wings received from Edmonton in the trade for Andreas Athanasiou, a player who is on an expiring contract, and will finish the season with the Wings.

Gagner is in the final year of a three-year, $9.45 million contract ($3.15 million cap hit), and will be an unrestricted free agent on July 1.

Gagner also has visa issues, although Yzerman doesn't expect those to be an issue, and Gagner should be with the Wings by Thursday.

Gagner will join Luke Glendening as the only righthanded shooters in the Wings' lineup.

"An added bonus," Yzerman said. "We'd like to get him (Gagner) in there because that would help."

A little bit away from the trade deadline and various personnel moves, Yzerman was asked about the possibility of the Wings retiring Sergei Fedorov's number 91.

Many Wings fans have shown support for the possibility of Fedorov's number being added to the rafters.

"It's not my place to make that decision and not my place to tell the Ilitch family (who own the Wings) what to do," Yzerman said. "Ultimately it's something that will get a lot of consideration."

Outlook:  The Devils (24-27-10) were another team that sold off veterans at the trade deadline, doubling down on some of their talented young players...They're building around C Nico Hischier (20 assists, 33 points) and C Jack Hughes (20 assists), last season's No. 1 overall pick.