The 2015 first-round pick has been saddled by injury (ACL), inconsistent play and, of course, bad luck like a pandemic that have hindered his chances.

Detroit — The news about Michigan’s weather the past few days, with the snow and cold, alarmed Evgeny Svechnikov.

Really? For this late in April?

“Oh man, that’s crazy,” said Svechnikov, the Red Wings’ 2015 first-round draft pick, who is hunkering down during this pandemic in North Carolina with his younger brother Andrei (Carolina Hurricanes). “The sun is out here every day. It’s not as bad.”

Evgeny Svechnikov has two goals and two assists in 20 games with the Red Wings since being a first-round selection in 2015. (Photo: Carlos Osorio, AP)

It reaffirms Svechnikov’s decision in the opening hours after the American Hockey League season was paused, to drive from his rented home in Muskegon to spend the quarantine with his brother.

Svechnikov quickly realized it was going to be difficult going it alone, with the Grand Rapids Griffins’ season stopped, and being stuck by himself.

He was bored and restless.

“I was going insane sitting at home,” Svechnikov said. “Doing nothing by myself. So I just drove down here and at least we can work out together.

“We’re doing everything together. Working out in the morning. It’s just more fun than being by myself and it’s helped me a lot.”

This season may or may not be resumed, but in Svechnikov’s mind, he is already preparing for next season (though, whenever that’ll be).

Ripe for the taking

Next season, Svechnikov, 23, is no longer exempt from waivers, so he’ll either start the season with the Red Wings — or be exposed on waivers and risk being lost to another team for nothing in return.

The assumption is, the Wings will keep Svechnikov and give him his first extended NHL look. It’s certainly what he wants.

That elusive prolonged chance to prove himself.

“I believe I’m good enough to play in the NHL,” said Svechnikov, who has played in 20 NHL games (2 goals, 2 assists). “I’m not thinking about where. I’m just going to come (to training camp) and do my best and go from there.

“It’s time. I’m not getting any younger.”

That is true. Svechnikov, a rugged 6-foot-3, 208-pound right wing has been on the brink of the NHL, but several factors have kept him out.

No room on the NHL roster, the organization wanting to make sure Svechnikov earned more pro experience in the AHL, injuries, and his inconsistency in Grand Rapids have conspired against him.

But when Svechnikov tore his ACL in September 2018 and missed the entire 2018-19 season, that could have been the defining point of his career to date.

The knee injury took a crucial year of hockey out of his development, and made for a rocky season thus far (the AHL season, too, has been paused, though unlikely to be resumed).

“I lost the whole season,” said Svechnikov of the surgery. “I didn’t play the whole time, so it’s tough. It was a tough spot. I could have been in the NHL that season. I had a good (training) camp.

“Everybody else was playing. I was hurt.”

Svechnikov returned this season and was actually one of the better Red Wings during the exhibition season, before being sent to Grand Rapids to get game action.

He started well with the Griffins, too. The Wings recalled Svechnikov in late October and he played four games (no points) before being returned to Grand Rapids.

But as the schedule progressed, it was an up and down season with the Griffins.

Svechnikov played in 51 games with 11 goals and 14 assists (25 points). After the impressive, all-around start, the points became harder to come by. 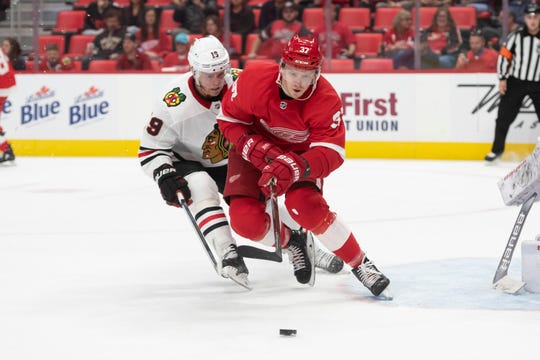 "It’s like home now. I want to be there and I’m good enough, I think, to be there," says right wing Evgeny Svechnikov. (Photo: David Guralnick, Detroit News)

The right ACL was reconstructed during the October 2018 surgery. Everyone in the Wings’ organization predicted a tough road back — and it proved to be.

Svechnikov expected it too, although the impressive training camp and start to this season gave him hope.

“I was in a lot of pain but I played well and I was impressed with myself, I was proud,” Svechnikov said. “I had a good start to the season. I was playing good the whole time, and I was getting rewarded with points.”

But as time wore on, the knee pain was a factor. It wore on Svechnikov.

Svechnikov isn’t using the knee as an excuse for his offensive numbers. For that, it was simply more the puck not being kind to him.

“I wasn’t getting any production,” Svechnikov said. “It was kind of tough. I was going up and down the lineup, playing with different players, I was doing good with what I could control, but it was frustrating.

“I did a lot well but I just wasn’t getting enough points. I was playing good but I couldn’t get rewarded.”

And with that, Svechnikov stayed in Grand Rapids while the Wings called up Filip Zadina and Givani Smith to the NHL during the season.

Svechnikov appeared to fall on the organizational depth chart.

There’s a good chance Svechnikov would have still been recalled had the pandemic not hit. But at this point, it’s speculation.

Svechnikov doesn’t want to dwell on it.

“Very frustrating,” said Svechnikov, of his inability to get more of an NHL opportunity this season. “I think I deserved it. A lot of people were focused on why I was struggling.

“I’m good enough to play in the NHL.”

It was a good stretch, but Svechnikov didn’t make the impact to convince the Wings to hold a roster spot the following autumn (although the knee surgery would have squashed those plans).

Svechnikov wants an opportunity over time to show what he can do at the NHL level.

“It’s different when you have two weeks, or a month in the NHL, people need more time,” Svechnikov said. “You need to see (over) a season in the NHL how a person does. You have to be comfortable and see how you can do.” 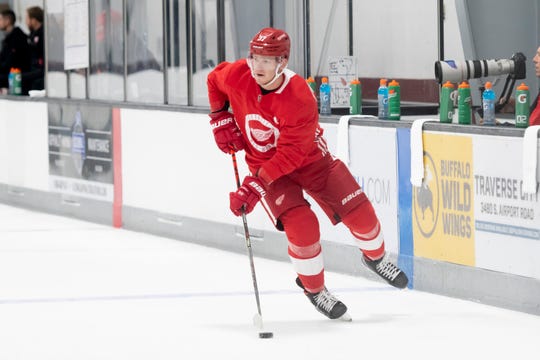 The frustration aside, Svechnikov is intent on reaching the NHL with the Wings.

“It’s my dream,” Svechnikov said. “I was drafted there and I have too many friends inside and outside the organization. It’s like home now. I want to be there and I’m good enough, I think, to be there.

The Wings aren’t going to hand Svechnikov a job.

General manager Steve Yzerman has stated the roster will look different. With the Entry Draft, free agency, trades, potential buy-outs, there are many variables that will contribute to the roster looking different.

Svechnikov isn’t taking anything for granted.

“When you have injuries it makes it tough, but nothing is going to break me,” Svechnikov said. “I’ve said it before, I’m going to keep working and working hard. I believe I’m good enough for the NHL.

“I haven’t even started my NHL career yet.”