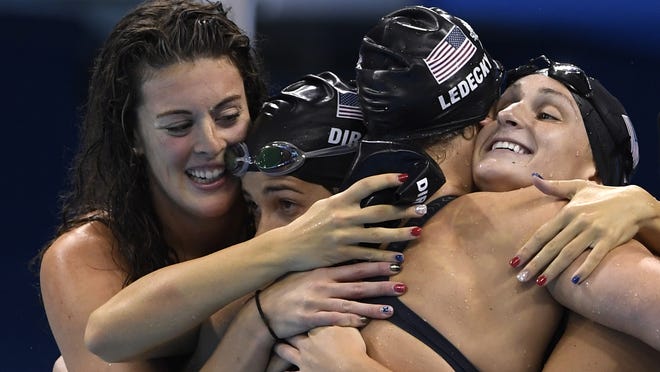 Rio de Janeiro — Kristin Armstrong had just put together another golden effort in an Olympic time trial, this time slicing through driving wind and rain, when her 5-year-old son approached her at the finish.

The American cyclist made it three consecutive gold medals on Wednesday, the ageless wonder conquering a brutal course at the Rio Games. Her time of 44 minutes, 26.42 seconds topped reigning bronze medalist Olga Zabelinskaya of Russia by the slimmest of margins: 5.55 seconds.

As for the tears, well, “that’s a great question from a 5-year-old,” Armstrong said with her now-familiar grin. “That’s what we do, we cry when we’re happy.

“I’m going to have to explain that one to him a little later.”

Zabelinskaya earned silver just days after she was cleared to compete by the Court of Arbitration, while Dutch rider Anna van der Breggen added bronze to her gold from the road race.

“It was very hard today. The roads on the downhills were very slick,” Villumsen said. “I didn’t want to take chances and that cost me some time. The race didn’t go the way I wanted.”

It went perfectly for Armstrong who, one day shy of her 43rd birthday, joined speedskater Bonnie Blair as the only American women to win three gold medals in the same event at any Olympics.

“I’ve had the hardest journey this Olympics that I’ve ever had,” she said. “There was a lot of pressure, and I didn’t realize this until this year but third place was a really bad result for me. I had to win everything. … But I knew how to get it done on one day.”

Despite her pedigree, Armstrong was a controversial selection for the U.S. team.

She retired for a second time shortly after the London Olympics, then decided earlier this year to pursue a third gold medal. But she eschewed competing in the toughest races in Europe to spend more time with her family, much to the chagrin of rival riders who made the sacrifices of racing abroad.

Then there were the accusations of bias: Her longtime coach, Jim Miller, also directs the national team for USA Cycling, though he recused himself from all deliberations over her selection.

Ultimately, two Americans filed for arbitration to try to make the team. One of the riders had beaten Armstrong in the national championships, putting her place on the team in doubt.

It wasn’t until a week before she departed for Brazil that Armstrong’s place was confirmed.

“When you’ve already been two times at the pinnacle of the sport, why risk coming back for the gold medal? The best answer I can give is that I can,” she said. “Today the stars aligned.”

Her latest gold medal was almost certainly her toughest.

Armstrong led by nearly 5 seconds after 10 kilometers but dropped 3 seconds back of Zabelinskaya by the second time check. She made up the difference over the final, flat run to the finish, precisely the kind of terrain that suits her riding style perfectly.

She was embraced at the finish by Zabelinskaya, a controversial figure coming into the race.

The Russian tested positive for the substance octopamine in July 2014 and accepted an 18-month ban, and that doping violation was poised to keep her from the Rio Games when the International Olympic Committee set in place rules that barred Russian athletes for previous doping offenses.

“In the morning they told us we could participate. In the evening, they said we won’t. It was two weeks like this,” she said. “I had my ticket to go back to Russia.”

Last week, the CAS ruled the IOC’s rules were “unenforceable,” allowing Zabelinskaya to compete in Saturday’s road race and ride down the starting ramp in Wednesday’s rainy time trial.

“I’m not the only cyclist that has a doping problem in the past,” said Zabelinskaya, who has always maintained her innocence. “I believe all athletes that they are clean.”

Taylor Phinney and Brent Bookwalter (Rockford) placed 22nd and 23rd in the men's individual cycling time trial on the streets of Pontal Wednesday.

Fabian Cancellara of Switzerland claimed the gold medal with a time of 1:12:15.42, while Tom Dumoulin of the Netherlands took silver in 1:13:02.83.