Düsseldorf, Germany – The fastest man in the world has been sidelined for a string of missed doping tests.

Christian Coleman, an American sprinter who won the 100-meter title at last year’s world championships and had been the early favorite for the Olympic gold medal at the Tokyo Games, was temporarily banned from competition by the Athletics Integrity Unit on Wednesday.

The AIU updated its list of athletes on provisional suspension to include Coleman hours after he revealed details of the case. The suspension will last until a final decision is reached at a hearing conducted under World Athletics Anti-Doping rules or the Integrity Code of Conduct. 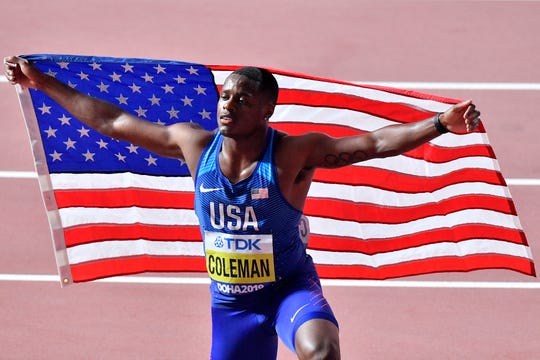 Coleman had a previous whereabouts charge dropped last year ahead of the world championships. But his current charge could lead to a two-year ban, ruling him out of next year’s postponed Olympics.

Coleman wrote on Twitter that drug testers were unable to find him Dec. 9 while he was shopping at a nearby mall for Christmas presents. That was his third infraction in a 12-month period.

Coleman asked why he didn’t receive a phone call when the testers were unable to find him, saying he had received calls “every other time” he was tested.

“I think the attempt on December 9th was a purposeful attempt to get me to miss a test,” he wrote.

The AIU said a phone call wasn’t a requirement and that it usually asks employees not to call athletes because that could undermine the testing program.

“Any advanced notice of testing, in the form of a phone call or otherwise, provides an opportunity for athletes to engage in tampering or evasion or other improper conduct which can limit the efficacy of testing,” the AIU said in an e-mailed statement.

Some of Coleman’s earlier missed tests were not with the AIU but with the U.S. Anti-Doping Agency, whose own handbook for athletes says phone calls are usually reserved only for the last five minutes of a time slot and “to confirm the unavailability of the athlete, not to locate an athlete for testing.”

Athletes are required to list their whereabouts for an hour each day when they must be available to be tested. A violation means an athlete either did not fill out forms telling authorities where they could be found, or that they weren’t where they said they would be when testers arrived.

Coleman said in his post he has been appealing the latest missed test for six months with the AIU, which runs the anti-doping program for World Athletics. He explained there was no record of anyone coming to his home and that if he had been called he was only five minutes away.

It’s the second time Coleman has faced a potential ban for a whereabouts violation.

Coleman won the 100 meters at the world championships in Doha, Qatar, last September after the U.S. Anti-Doping Agency dropped his case for missed tests because of a technicality.

“I have never and will never use performance enhancing supplements or drugs,” Coleman wrote Tuesday. “I am willing to take a drug test EVERY single day for the rest of my career for all I care to prove my innocence.”

After winning the gold medal in Doha, Coleman said he needed to be more careful to keep track of his whereabouts.

“I haven’t been careless. I think I can just be more mature about it, more diligent about updating the app. But I mean, I think everybody in this room is not perfect. Everybody has made mistakes,” he said. “Going forward, I just try to do a better job about being more diligent about it.”

Coleman is the latest in a string of runners hit with whereabouts charges in 2020.

The AIU filed a similar charge this month against women’s 400-meter world champion Salwa Eid Naser of Bahrain. She was already under investigation when she won gold in Doha last year in the fastest time since 1985.

Former U.S. national 200 champion Deajah Stevens was suspended in May.