Illinois' Benny Ossterbaan tags Grosse Pointe Woods-Shores Drew Hill but is too late and Hill is safe at second in the first inning. Daniel Mears, The Detroit News
Fullscreen

A young fan gets a good vantage point, climbing up a light post in left field. Daniel Mears, The Detroit News
Fullscreen

Pitcher Will Pflaum comes in during the third inning to replace starter Drew Hill. Daniel Mears, The Detroit News
Fullscreen

Pitcher Will Pflaum comes in during the third inning to replace starter Drew Hill. Daniel Mears, The Detroit News
Fullscreen

Illinois' Joe Boggs celebrates after getting Grosse Pointe Woods-Shores out at first to end the third inning. Daniel Mears, The Detroit News
Fullscreen

Grosse Pointe Woods-Shores families and fans cheer on their team during their victory. Daniel Mears, The Detroit News
Fullscreen

Jordan Arseneau connects for a two-run homer to put Michigan up for good at 6-2 in the fifth inning. Daniel Mears, The Detroit News
Fullscreen

Illinois' Evan Phillips gives Grosse Pointe Woods-Shores' Jordan Arseneau a hand slap as he passes second after connecting for a two-run homer to put Michigan up for good at 6-2 in the fifth inning. Daniel Mears, The Detroit News
Fullscreen

Michigan players wait for teammate Jordan Arseneau to come home after he hit a two-run bomb in the fifth inning. Daniel Mears, The Detroit News
Fullscreen

Illinois' Evan Phillips drops his head after bobbling and losing a ball for a Michigan base hit in the fifth inning. Daniel Mears, The Detroit News
Fullscreen

Illinois' Charlie Bergin doesn't like the out at first by Grosse Pointe Woods-Shores' Adam Ayrault in the fifth inning. Daniel Mears, The Detroit News
Fullscreen

Grosse Pointe Woods-Shores' Adam Ayrault and Will Pflaum begin the celebration after the 6-3 victory over Illinois. Daniel Mears, The Detroit News
Fullscreen

Lisa Arseneau, holding a huge picture of Jordan Arseneau, gives her son a big kiss after the team earned a trip to the Little League World Series.(Photo: Daniel Mears / The Detroit News)Buy Photo

Roughly 7,000 teams compete each year to reach the Little League World Series, so the odds are indeed long for making it to Williamsport, Pa.

The odds of having two sons play on the world’s biggest stage for 12-and-under baseball players? That’s like hitting the lottery twice.

It’s the improbable fortune for Grosse Pointe Woods-Shores coach Jason Hill, who will be trading in a view from the stands to one in the dugout at Howard J. Lamade Stadium this week.

Hill’s oldest son, Tyler, was part of the Grosse Pointe Woods team that reached the nationally televised tournament in 2013. Four years later, Hill is at the helm of his son Drew’s team that is one of the final 16 standing among eight United States and eight international teams.

Grosse Pointe secured its spot in the annual summertime showdown after winning the Great Lakes Region title in Indianapolis this past weekend in comeback fashion, bouncing back from an opening-round loss and rattling off four straight victories that was capped by a 6-3 win over Hinsdale, Ill., in the championship game.

Grosse Pointe opens World Series play at 7 p.m. Thursday against the Southwest Region champ from Lufkin, Texas. The game will be televised on ESPN2.

“I didn't coach my older son (Tyler) but I've been able to have this experience twice. I'm the luckiest guy in the world,” Hill told The News earlier this week. “To have one son play in Williamsport, much less have two, it really hasn't even set in yet to be honest.

“I think Wednesday and Thursday when we get closer to the games and there's thousands of people walking around here at the stadium, I think it'll sink in. It's pretty surreal.”

The team is comprised of all-stars from the majors division of the Grosse Pointe Woods-Shores Little League. Of the roughly 70 12-year-olds, the league’s coaches selected nine players and Hill made four “wild card picks” of his choosing to round out the 13-man roster.

Hill, who serves as an assistant coach in the league on his son’s team, applied to be the Grosse Pointe Woods-Shores 12U coach and was selected by the league’s board of directors. He’s joined by assistant coaches Andy Ayrault and Marc Arseneau, whose sons Adam and Jordan are on the team.

According to Hill, the core group has been playing together since they were 8 years old and most of the players are the same ones he coached on last summer’s 11U team, which failed to make it out of the district tournament.

“I remember it was so disappointing. I was depressed for a week,” said Grosse Pointe outfielder and catcher Joseph Wisniewski. “I can't even explain how disappointing it was. It was terrible.”

That lingering let down served as a source of motivation as Grosse Pointe Woods-Shores got over the hump and bested Grosse Pointe Park, 9-6, for the district crown in July.

From there, Grosse Pointe mowed down the competition to win the state title in convincing fashion. Hill’s team surrendered a meager five runs in three pool-play victories before beating Taylor North Central, 11-1, in the quarterfinals; routing Kingsford, 17-0, in the semifinals; and rolling Dexter, 10-0, in the championship game.

“As that (state) tournament went on, I think we, the coaching staff, started realizing we had a great combination,” said Hill, who teaches English and social studies at East Detroit High School. “We have two really good power pitchers (Jack Jones and Joey Randazzo) that are really effective at this age because they throw so darn hard and we have a great hitting lineup. We have a really good hitting lineup and I'm not just talking one through five. Whatever nine guys I put in the lineup, they all can swing the bat.

“We got a lot of guys that have the capability of hitting the ball out of the park and that really puts a lot of pressure on the opposing pitchers and defenses. I think that's when we realized we might have a shot at this thing."

However, Grosse Pointe’s confidence was shaken after it was thumped, 10-2, by Hamilton, Ohio, in its first game of the Great Lakes Regional tournament last week and pushed to the brink of elimination.

Rather than let doubt set in, the lopsided loss served as a wake-up call as Grosse Pointe proved it had the pitching to advance out of the losers bracket.

“We just had to stay fired up because we knew that if there was one team in the tournament to bounce back, we knew that it would be us,” Randazzo said.

The team began to fight its way back, riding Jones’ 11-strikeout performance to edge New Albany, Ind., 4-3. Then the bats started to come to life, backing Randazzo’s six-strikeout shutout in a 10-0 mercy win over Lexington (Ky.) Eastern in four innings and Matthew Greene’s 10-strikeout gem in an 11-3 triumph in a rematch against the team from Ohio.

Then in Saturday’s final against Hinsdale, Ill., Will Pflaum fanned four in four innings before Grosse Pointe Woods-Shores used a five-run fifth to prevail, 6-3, pushing its record to 14-1 and becoming the ninth team from Michigan — and third from Grosse Pointe — to stamp its ticket to Williamsport.

“I can't really explain it because after (losing) Monday I sure didn't think we had much of a chance,” said Hill, who added the team has been on the road since Aug. 4 and made the nine-hour bus trip from Indianapolis to Williamsport on Sunday.

“I don't think that anybody was predicting us to go to the Little League World Series. That's something that's hard to foresee but we definitely knew we had a good group. Our goal was to win the state championship and definitely the success that our little league has had in the postseason has definitely fueled a lot of these kids and motivated them to do well.”

Will Pflaum pitches in the sixth inning of the Great Lakes Region championship game. (Photo: Daniel Mears / The Detroit News)

While Grosse Pointe Woods-Shores might have exceeded expectations, it is five wins away from becoming the second Michigan team to claim the Little League World Series title, a feat that has only been achieved by the 1959 team from Hamtramck. The once-in-a-lifetime opportunity isn’t lost on Wisniewski and Randazzo, who both grew up watching the Little League World Series on TV. Randazzo also made the trip to Williamsport to support the Grosse Pointe team in 2013.

"This is like I'm living a dream right now,” Wisniewski said. “I thought winning the state championship was awesome and I was just excited to go the regionals.

“And then when we got there I'm like, 'We got a shot at winning this.' It's just been awesome to be here.”

Wisniewski added the thought of playing with millions of viewers watching is “a little nerve-wracking” but the jitters will cease Thursday when Grosse Pointe faces a stiff test in its opener against Lufkin, Texas, who is considered the favorite to advance out of the United States bracket to the Aug. 27 championship game.

But no matter how Grosse Pointe Woods-Shores fares, Hill believes his team has already defied the odds.

“The whole experience and opportunity to represent Grosse Pointe and the state of Michigan is something that I hope they never forget.” 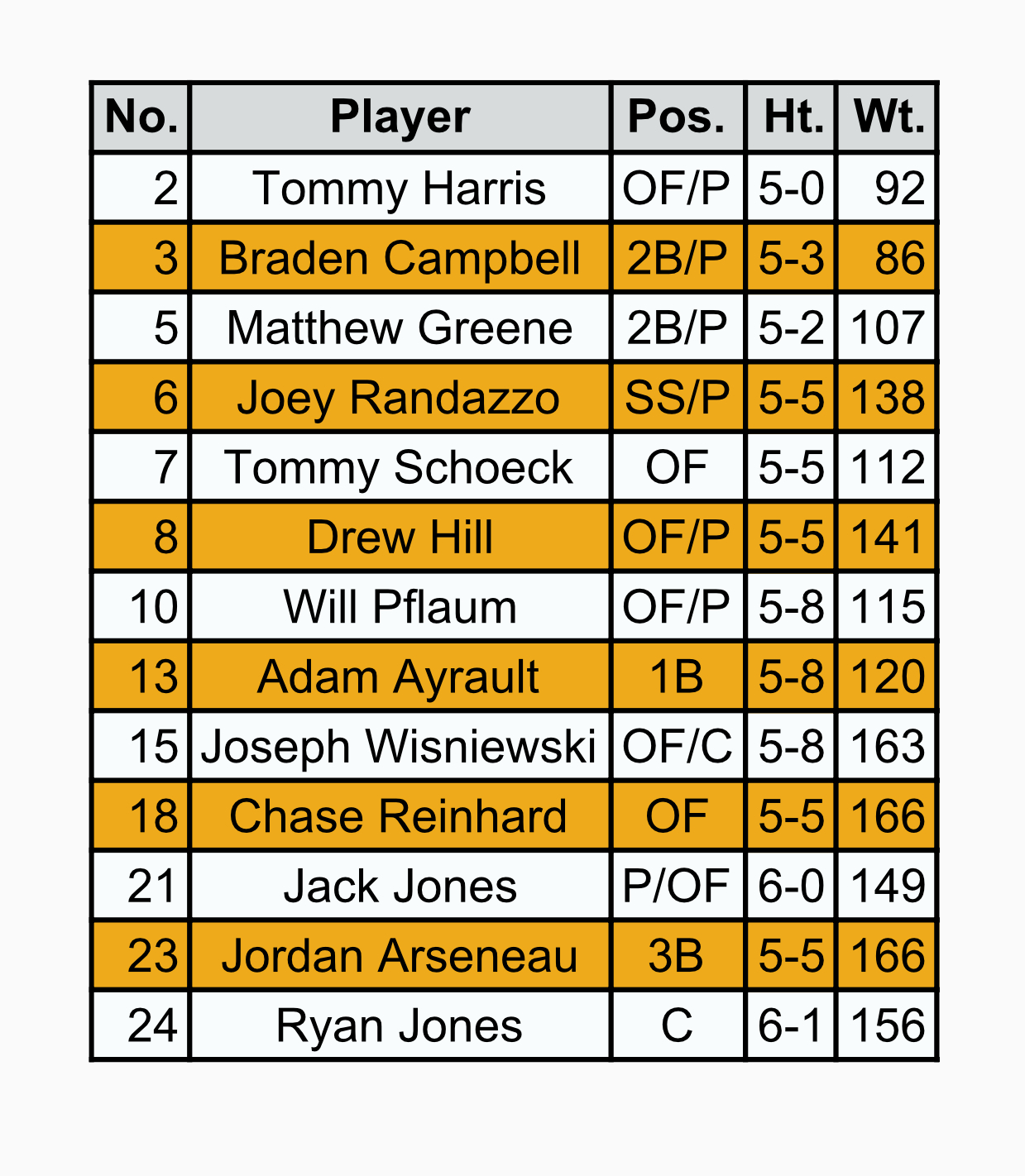 What: Opening-round game of the Little League World Series

At stake: A spot in Sunday’s 11 a.m. game in the winner’s bracket. Loser plays in an elimination game at 3 p.m. Saturday.

Grosse Pointe in the LLWS