Michigan Hall inductees look back on their rise to fame

Five eventual sports legends had different upbringings, but something in common, too.

Michigan Hall inductees look back on their rise to fame 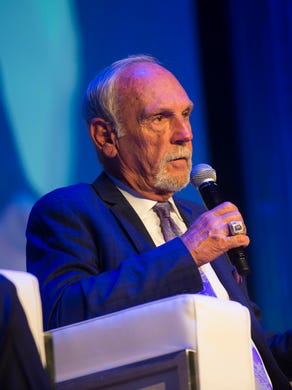 2017 Michigan Sports Hall of Fame inductee Jim Leyland walks through the crowd after the ceremony. Rachel Woolf, Special to The Detroit News
Fullscreen 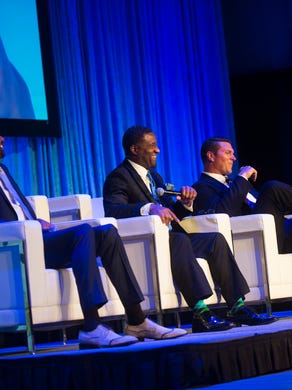 Pistons cheerleaders stand on the red carpet as disciss a cheer. Rachel Woolf, Special to The Detroit News
Fullscreen

Guests walk the red carpet and stand in the lobby during the Michigan Sports Hall of Fame Induction Ceremony. Rachel Woolf, Special to The Detroit News
Fullscreen

2017 Michigan Sports Hall of Fame inductee Andre Rison pauses as he talks to the media on the red carpet. Rachel Woolf, Special to The Detroit News
Fullscreen

A Dick Enberg-signed baseball is on display as part of the silent auction. Rachel Woolf, Special to The Detroit News
Fullscreen

Latrice Shaw, of Detroit, looks at sports memorabilia in a silent auction. Rachel Woolf, Special to The Detroit News
Fullscreen 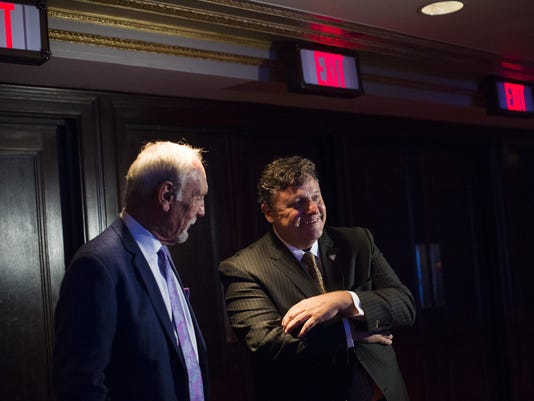 Detroit — From Flint to Detroit, Clawson to the Toledo suburbs, five eventual sports legends had different upbringings, but something in common, too.

Their beginnings, either in childhood or early in their sports careers, were humble, making Friday night’s Michigan Sports Hall of Fame induction ceremony all the more special.

“Falling in love with basketball,” said former Michigan and NBA star Jalen Rose, who grew up on the northwest side of Detroit, “I played on a milk crate, cut a hole in the bottom of it and nailed it to a telephone pole. Had to shoot a lot of runners, had to shoot a lot of floaters.

“You’ll get a concussion or some splinters running into that thing.”

Former Pistons “Bad Boy” Dennis Rodman and Dean Look, a Lansing native and former football and baseball player and football referee, were unable to attend and their inductions will be pushed back to 2018.

Most Hall of Fame classes have some diversity, at least in terms of background, but this year’s has a common theme: From the grit to glory.

Take Leyland, 72, for instance. He was a light-hitting player and eventually a player-coach in the Tigers’ minor-league system, when the organization’s rookie-league coach got ill. Hoot Evers, the farm director at the time, asked Leyland if he was ready to manage.

And, oh so fascinating.

Leyland made $6,000 for the year from that first job, and the job hardly required just managing. There was no coaching staff, no general manager. There wasn’t even a traveling secretary, meaning Leyland also was in charge of handing out meal money and booking the buses and hotel rooms.

Back then, a rookie-league team had 45 players on the roster, but could only have 19 active every night.

Leyland managed in the Tigers system for another decade, rising along the way, until Chicago White Sox manager Tony La Russa called to offer him a job on staff. Leyland was intrigued — the big leagues is the pinnacle — but wanted to circle back to the Tigers first.

He asked the Tigers, then managed by Sparky Anderson, to put him on the major-league staff, even as a bullpen coach. He even offered not to go on the pension rolls. But Anderson had his guys, as all managers do, and Tigers GM Bill Lajoie said there was no room.

So Leyland took the job, a few years later was managing the Pittsburgh Pirates, and in 1997 led the Florida Marlins to a World Series championship.

“I signed with the Tigers in 1963 and in 2006, I got the manager’s job,” said Leyland, who oversaw four playoff teams — and two Tigers teams that made it to the World Series, including that first year in 2006. So I think I paid my dues.”

Likewise, Kampe, 61, another Ohio native, put in the time.

He was an assistant basketball coach at Toledo in 1984, when Toledo’s baseball coach dropped by his office, mentioned Toledo had just played Oakland in baseball, and that Oakland had a basketball opening.

The baseball coach told Kampe to check it out.

“It was quite a building job. I was 28 years old, I think I was the youngest head coach in the country at a scholarship-giving school. And I figured we’d win the national championship in Year 2, and I’d be at UCLA in Year 3. I never thought that I’d be at Oakland for 34 years.”

Kampe has taken Oakland’s basketball program from nothing to mid-major darling, one that’s always a threat to beat a Power 5 powerhouse. Oakland was in Division II his first 15 years, but transitioned in the late 1990s.

It’s since been to three NCAA Division I Tournaments, and he’s posted a 583-424 record and has the third-longest active tenure at one school in Division I, behind only Syracuse’s Jim Boeheim and Duke’s Mike Krzyzewski.

“I’m looking at a Gordie Howe jersey right now, Al Kaline was at the event last night, Sparky (Anderson), and going in with Leyland,” Kampe said. “Just to be associated with them, it’s probably the greatest honor I’ll ever have.”

Rison, 50, a former Michigan State star receiver who went on to a 13-year NFL career, saw it all begin in hard-nosed Flint, where he was the man at Flint Northwestern High School.

Not unlike today, Flint had its issues then. Even so, his mother, Vietnam veteran father and other family members did their best to keep him on the right path, while instilling a serious work ethic.

“I owe everybody to everybody else,” Rison said, his eyes hidden behind sunglasses. “I believe that’s how I obtained success, by deferring. I remember, I came home once with nine medals and won two basketball trophies in the same day.

“And they told me (don’t) put them up on the banister, because you’ll never get another one. Because you’ll continue to look at those.”

Jansen, 41, an offensive lineman who won a national championship at Michigan before going on to an 11-year NFL career that ended in 2009 following a one-year stint with the Lions, grew up in Clawson, just north of Detroit.

He never doubted where he was going to college. It always was Michigan. There was no other option, he said. And he committed Oct. 2, 1993, his father’s birthday. (Things have changed, he was UM’s first commitment for the 1994 class; now, kids commit two years out.)

Friday was surreal for him, seeing the sports stars he grew up idolizing — Kaline was among the dignitaries in attendance — while preparing to be enshrined among them.

“Especially being an offensive lineman,” Jansen said with a smile. “We don’t get a lot of attention. Most of the time, when we do get the attention, it means you’ve done something wrong.”

Rose, a member of Michigan’s famed “Fab Five,” knows all about doing something wrong. After all, he got into his fair share of trouble as a kid, first on the west side, then on the east side.

He remembers attending St. Cecilia for sixth and seventh grade. His family sent in tuition for eight grade, and St. Cecilia sent it back, saying, essentially, find another school, troublemaker.

Rose found another school, found more mentors, got his act together, and eventually starred at Detroit Southwestern, before heading to Michigan (more success, even if the Final Four banners have come down) and a 13-year NBA career, before becoming a TV star.

“I’m really fortunate,” Rose said. “The game of basketball took me places and showed me things.

“And so many people that put me on the right path.”