Russia ended a 16-year wait for victory in the tournament by routing Saudi Arabia 5-0 Thursday in Group A. 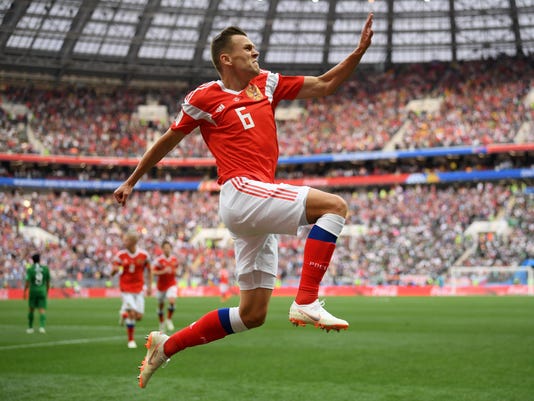 Moscow — Vladimir Putin craves sporting glory, and he got another taste of it in the opening match of the World Cup.

Russia ended a 16-year wait for victory in the tournament by routing Saudi Arabia 5-0 Thursday in Group A, with the Russian president watching from the VIP box alongside FIFA president Gianni Infantino and the Saudi crown prince.

It was the host nation’s first World Cup win since 2002, and it raises the hope that Russia can get past the group stage for the first time since the Soviet era.

Yuri Gazinsky initially put Russia ahead with a header from Alexander Golovin’s cross when the Saudis failed to clear a corner in the 12th minute. Gazinsky charged forward to meet the ball as Saudi player Taisir Al-Jassam stumbled, leaving a simple finish.

Putin and Infantino smiled and shrugged as they sat next to Saudi Crown Prince Mohammed bin Salman. Putin then reached over to shake the prince’s hand.

Substitute Denis Cheryshev soon scored the first of his two goals. He chipped the ball over two Saudi defenders in the 43rd minute and shot over goalkeeper Abdullah Al Muaiouf’s right side to make it 2-0. He later chipped the ball in for Russia’s fourth goal in stoppage time.

“I have never done anything like this,” Cheryshev said. “I already felt very happy when I knew I could come here with my squad, but I never, ever dreamed of something like this.”

After Cheryshev’s first goal, Artyom Dzyuba made an instant impact off the bench to make it 3-0 in the 71st with a header from Golovin’s cross. Golovin added the fifth from a free kick.

Putin has made no secret about his desire for success in international sports, especially at the Olympics. But high points for Russian athletes have been rare since the country’s image was tarnished by doping, with numerous Olympics medals stripped for drug use.

In a World Cup first, the video assistant referee system was available for the match between the tournament’s lowest-ranked teams, though it wasn’t used for an official review.

The Saudis, who last won a match at the World Cup in 1994, failed to get a single shot on target.