Trying to find a way to limit Purify’s impact will be one of the challenges for teams facing the Great Lakes champions.

Williamsport, Pa. — Opposing managers have been known to take the bat out of Jarren Purify’s hands.

If they really want to contain the Grosse Pointe Woods-Shores third baseman and No. 2 hitter in the lineup, they might also want to consider tying his shoelaces together.

Trying to find a way to limit Purify’s impact will be one of the challenges for teams facing the Great Lakes Regional champions at the Little League Baseball World Series.

Grosse Pointe Woods-Shores earned a return trip to the World Series by rolling through the Great Lakes Regional by a combined margin of 46-6 in four games.

Purify did so much damage that when he came to the plate with none on and one out in the regional-championship game, New Albany, Ind., manager Brian Jackson chose to intentionally walk him.

It was not the first time Purify experienced such treatment in uncommon situations like the bases being empty.

“You have no idea,” Purify said. “Back in Little League, the Yankees manager walked me every time.”

Kurt Barr, Purify’s manager on the Grosse Pointe Woods-Shores all-star team, understands. He walked Purify in some situations when they were on opposite sides during the league’s regular season.

“Not in the first inning, though,” Barr said.

Purify still found a way to make a big impact in the 13-0, four-inning rout that clinched the berth in Williamsport.

He scored runs in each of the first three innings.

“You can have your players hit you in,” Purify said. 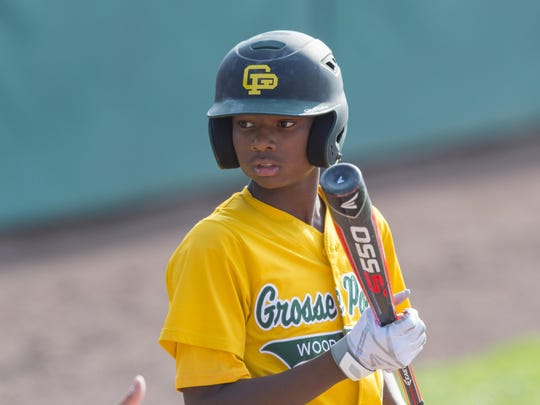 After showing off his speed racing around the bases on hits by Ryan Knaebel and Oliver Service to score in the first, Purify got to take his time on the bases in the second. His only swing of the game was used to crush a pitch well beyond the left-field fence for a two-run homer.

“Of course, you want to hit the ball just to show them to walk you again,” said Purify, whose swing pounded home a point he had already made by putting up big numbers throughout the Great Lakes Regional.

“We’re a team first and foremost, so I usually don’t like talking about individuals.

“But Jarren is probably the best 12-year-old player I’ve ever seen and I’ve been around the game a long time. He’s got speed; he’s got power; he’s got a strong arm; he plays great defense. He’s a five-tool athlete.”

Purify had plenty of help in the dominant regional effort.

Brennan Hill, the son of 2017 manager Jason Hill who follows older brothers Ty and Drew in making it to the Little League World Series, led the team with three homers and 10 RBIs while going 5-for-8 and serving as the top pitcher. He was 2-0 with an 0.69 earned run average, striking out 19 while giving up five hits and five walks in 8.2 innings.

“Last year, when Drew made it, I really wanted to make it,” Brennan said.

Grosse Pointe Woods-Shores was eliminated in consecutive losses in those 2013 and 2017 trips, although it did pick up a victory in an international consolation game before leaving Pennsylvania last summer.

With plenty of weapons on an entirely new roster, the team is looking for more.

Reggie Sharpe and Knaebel each went 7-for-13 (.538) with nine runs at regionals. Sharpe hit two homers while Knaebel had two doubles and two triples.

Knaebel, one of four who split up the remaining pitching duties by working between 2.1 and 3.1 innings, got the other two wins.

“This group of kids is special and that’s why we’ve caught some of the breaks we’ve caught, not because we got lucky, but because of their demeanor and their approach and their personality,” Barr said.

The first test comes against Coeur d’Alene, which avenged a loss earlier in the tournament by beating Billings, Montana, 2-0, in the Northwest Regional final.

Christopher Reynolds led the team to the title. He went 2-0 without allowing an earned run while striking out 24 in 11.2 innings and also led the offense with eight hits and a .500 average.

Tom Robinson is a freelance writer.