Khabib Nurmagomedov and Conor McGregor will remain suspended at least until December because of a brawl inside and outside the octagon after their UFC match in Las Vegas. 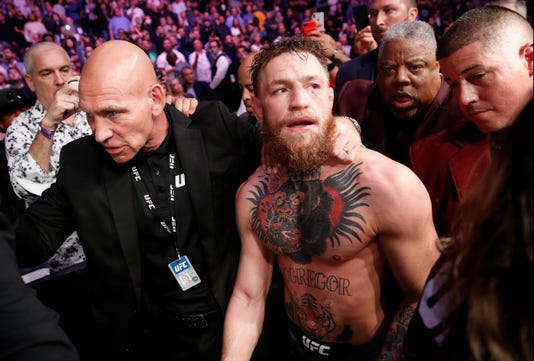 Las Vegas — Khabib Nurmagomedov and Conor McGregor will remain suspended at least until December because of a brawl inside and outside the octagon after their UFC match in Las Vegas, but the Nevada Athletic Commission on Wednesday allowed some prize money to be released to Nurmagomedov.

Neither the Russian from Dagestan nor the Irishman attended a brief hearing in Las Vegas at which Nurmagomedov was called the catalyst for the Oct. 6 “chaos.”

Commission Chairman Anthony Marnell III said the suspensions will last until an investigation is complete.

Marnell said fines and punishment up to a lifetime ban could be considered, and said the fighters will be required to attend a Dec. 10 disciplinary hearing.

“I’m not going to do that hearing over the telephone,” he said.

The hearing included references to commission discipline in the past — including a one-year suspension and $3 million fine imposed on boxer Mike Tyson for twice biting Evander Holyfield’s ears during a bout in June 1997.

The five-member panel voted unanimously to extend the 10-day suspensions imposed effective Oct. 15 by commission Executive Director Bob Bennett and the release of $1 million of the $2 million withheld from Nurmagomedov immediately after the Oct. 6 brawl at T-Mobile Arena.

Marnell noted that the commission could order the withholding of both the post-fight purse and pay-per-view revenues that he estimated reaped up to $6 million. But he said the commission didn’t want to prevent the fighters’ employees from being paid.

Nurmagomedov climbed over the cage and scuffled with a fighter in McGregor’s corner after McGregor (21-4) tapped out during a chokehold by Nurmagomedov (27-0) in the fourth round of UFC 229. 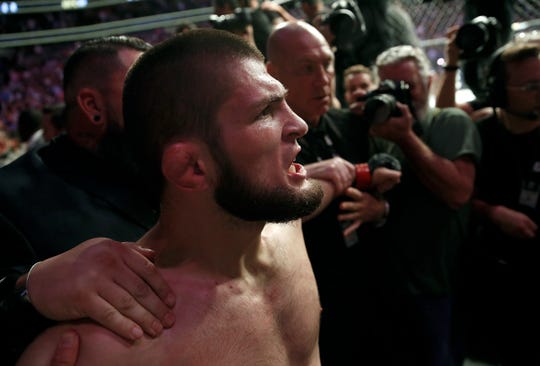 Khabib Nurmagomedov is held back outside of the cage after beating Conor McGregor at UFC 229 in Las Vegas. (Photo: John Locher, Associated Press)

Caroline Bateman, a deputy Nevada state attorney general, told the commission that video later surfaced showing McGregor both trying to climb the cage to apparently join fighting outside and attempting to strike another person doing the same.

Marnell said he would have also withheld McGregor’s $3 million purse if he’d immediately seen that video.

A McGregor representative, Michael Mersch, attended the commission meeting and said afterward that he had not seen that video and was surprised by Marnell’s comment.

“But for the actions of Nurmagomedov, none of this would have happened,” Mersch said.

Nurmagomedov did not send a representative to the meeting, although Bennett said he had spoken recently with the fighter’s manager, Ali Abdelaziz at Dominance MMA Management.

Abdelaziz did not immediately respond to telephone and email messages from The Associated Press.

Nurmagomedov, who was praised following the fight by Russian President Vladimir Putin, has said on social media that he was being unfairly punished. The fighter complained that discipline didn’t follow an incident last April in Brooklyn, New York, when McGregor shattered windows on Nurmagomedov’s bus with a wheeled cart.

Officials said that incident followed a confrontation days earlier between Nurmagomedov and one of McGregor’s teammates.