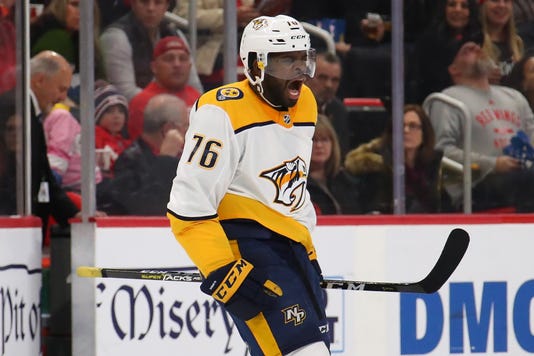 Matthew Cornett says his son Ty, a 13-year-old hockey player, has watched the video “about a thousand times.”

When the NHL All-Star P.K. Subban heard from the father of one of Cornett’s teammates on the Plymouth Sting that Ty, who is black, has encountered a lot of racial harassment playing hockey, Subban made a video.

Subban made it Friday, standing behind the bench in Little Caesars Arena before the game between Predators and the Red Wings.

“Ty, this is P.K. Subban, here, with the Nashville Predators,” said Subban, who also is black. “I heard a little bit about you, and what you’re going through.

“I can tell you this, right now, that as long as you’re still breathing in this world you’ve got to believe in yourself and let nobody tell you what you can and can’t do, especially it’s because of the color of your skin.”

When Ty saw the video, his father said, “I don’t think anything could have affected him the way that it did.

“He went to his game that night and he gave me the biggest hug and he said, ‘Dad, I’m going to score a goal for you.’

Cornett’s father said that since 2010, but especially in the last two years, his son has faced myriad instances of intolerance, the sort of baldly ignorant notions about people of African descent that seem beyond belief.

“My kids are all adopted,” said Matthew Cornett, of Wayne. “We adopted them through the foster system here, in Michigan.

“And, my wife and I are white. So, this is uncharted territory for us.

“That is why P.K. Subban meant so much to him.

“He was saying stuff in the video that I’ve said a million times to him,” Cornett said. “But it’s different because P.K.’s been through it.

“And, I’ve always said that to him, like, I’ll never walk in your shoes. I’ll never know how bad it’s going to hurt.

“I’ve always told my son, if it gets to be too much, we’ll find something else. But, he says he loves hockey and that’s all he wants to play.”

But, the racial hostility and invective has increased, Cornett said.

“lt’s gotten so bad, I almost pulled him out myself. But, he begged me not to.

Subban sought to address the ignorance in the video.

“You know, in this world, some things happen that we don’t really understand. That’s OK. We don’t have to understand," he said. "All we need to do is understand our self, believe in our self and keep trying and pushing forward.

“So, I just want to tell you that when you’re playing hockey, you play because you love the game and you want to play,” Subban continued. “Don’t let nobody take that away from you. All right, Ty?”

Early Tuesday, the Michigan Amateur Hockey Association and its parent, USA Hockey, said they were not aware of Ty Cornett's complaints or what his father says he has experienced.

By the end of the day, however, both said they were learning some of the details and are poised to begin a review.

Subban also reached out to a young black player from Maryland, who might have participated in the tournament.

“I haven’t heard anything about it, and I haven’t seen any report come through our Safe Sport Program,” MAHA president George Atkinson said of Ty Cornett’s situation. “We have a zero tolerance."

“Technically, if that happened, an official should have given the kid a match penalty, if that was the case,” Atkinson said. “And, they could suspend him indefinitely, pending any hearings.”

Cornett said he is beginning to work with the Plymouth Hockey Association, for which his son plays, to approach the MAHA.

“I don’t want to name the local team yet that did it because, well, there’s about four bad kids on the team and about 12 good ones,” Cornett said.

“We’re contacting MAHA with the head of the association, and instead of suspending people, I think the refs and the coaches involved need to go to sensitivity training.

“So, hopefully, they are dealing with it that way.”

In the spring, playing in a tournament in Chelsea against a team from Indiana, Cornett said the harassment grew pitched.

“My son, he’s pretty much average sized. But, he hits like a Mack truck. It usually makes the kids angry, and they look for ways to start chipping away at him.

“And, every time he would line up in front of their bench, they would beat their chests. And I watched them doing that and the coach would smile about it, smirk about it.”

Players from the Indiana team followed Ty and, according to his father, said, “Hey, monkey, stick to basketball.”

After some other racist comments, the opposing coaches yelled at each other. But there were no official sanctions.

In Dearborn this year, in a tournament against a team from Pennsylvania, a father of an opposing player called Ty a monkey, Cornett said.

“And then, he played his former team this year, and that’s when it got really bad,” Cornett said.

“It’s unreal,” Cornett said. “It’s gotten out of hand, the past two years.

“Unfortunately, my son got used to it this year. When he was first called the N-word a few years ago at the age of 10 by a Canadian team, he had a breakdown on the ice and he went after a kid.

“In three years, it’s become so commonplace that it starting not to bother him. It’s starting to chip away at him.”

Teammates have stood up for Ty, his father said, including one who got tossed from a game for doing so.

“Ty’s best friend on the team is the goalie, Billy. The goalie went to his father and he just started crying and said, ‘I can’t take it. I go out there and I hear all this stuff they say to Ty and I just can’t do it anymore. We have to do something.’

“And, that’s when the dad contacted the NHL and contacted P.K. Subban.”