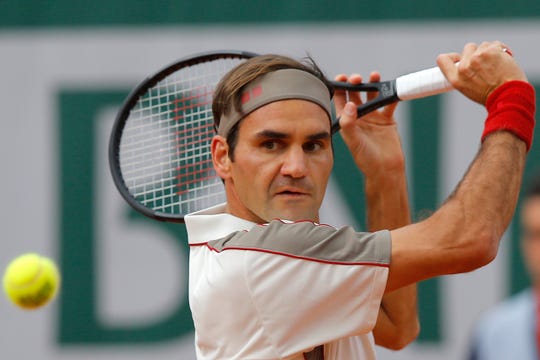 Roger Federer plays a shot against Oscar Otte during their second-round match of the French Open on Wednesday at the Roland Garros stadium in Paris. (Photo: Michel Euler, Associated Press)

Paris — Roger Federer, 37, joked to a stadium filled with screaming kids that he’s “so super old.”

Stan Wawrinka, 34, pulled a crying boy out of a crush of autograph-seekers in the stands.

Rafael Nadal, about to turn 33, offered this advice to youngsters at his match who might be pondering a tennis career: “The main thing is, don’t think about winning Roland Garros.”

Schools in France are closed on Wednesdays, bringing out a, um, louder brand of fan to the French Open, and that trio of past champions of the clay-court major seemed to appreciate the adulation from the little ones who attended their straight-set victories. Fitting, too, perhaps, that Federer advanced to a third-round meeting against 20-year-old Casper Ruud, someone so much his junior that the guy’s father was in the field when Federer made his debut in Paris in 1999.

“I know probably more about his dad,” Federer said, “than about him.”

Federer, the tournament’s 2009 champion who hadn’t been in the field in four years, will be playing his third opponent in a row who is 25 or younger, after beating 144th-ranked Oscar Otte 6-4, 6-3, 6-4 in the second round.

Now the 20-time major champion takes on Ruud, a Norwegian ranked 63rd. He is coached by his father, Christian, who told Casper he once practiced with Federer, although they never played.

Then came this admission from Ruud: “To be honest, I’ve been a little bit more of a Rafa fan and Rafa guy.”

Better hope no one tells Roger.

Still, even if he always has preferred Nadal, Ruud described what comes next this way: “I’m playing one of the greatest champions ever of this sport on Friday, so I’m just super excited for it. I can play loose and free.”

Wawrinka, the winner in 2015 and the runner-up two years later, also had no trouble against a much younger foe Wednesday, eliminating 22-year-old Cristian Garin 6-1, 6-4, 6-0.

Afterward, Wawrinka came to the rescue of one of his tiniest fans, lifting him away from danger and offering a towel as a keepsake.

“I took him out of that mess a little bit,” Wawrinka said. “He was in pain and sad.”

Owner of three Grand Slam titles in all, Wawrinka will bring his signature backhand into what shapes up as a more competitive matchup against two-time major semifinalist Grigor Dimitrov, who eliminated 2014 U.S. Open champion Marin Cilic 6-7 (3), 6-4, 4-6, 7-6 (2), 6-3 over nearly 4½ hours.

Nadal’s form hadn’t been up to his usual standards during much of the clay season: This was the first time since 2004 that he entered May without a title for the year.

But he looked good while taking the title at the Italian Open this month, including a victory over Novak Djokovic in the final, and he’s been close to untouchable so far as he seeks a record-extending 12th trophy in Paris.

His latest tour de force was a 6-1, 6-2, 6-4 win over 114th-ranked Yannick Maden, a qualifier from Germany. OK, so Nadal hasn’t really faced much of a test yet. Still, he is displaying the court-covering, ball-walloping style he has perfected, which could come in handy when he plays 2016 French Open quarterfinalist David Goffin in the third round.

“I don’t like the word ‘easy,’ because when you win, it always looks easier,” Nadal said. “I can say (I had) a comfortable victory. I have been in control most all the time. And that’s the only thing that really matters.”

On Wednesday, No. 4 seed Kiki Bertens, a 2016 semifinalist and considered a contender for her first major title, quit during the first set of her match against Viktoria Kuzmova because she was sick.

Tears filled Bertens’ eyes as she described waking up at 3 a.m., feeling ill.

“Vomiting. Diarrhea. All night long, all day long. I felt a little bit better before the match. I had some sleep, and I just wanted to give it a try,” she said. “But then as soon as I start warming up right before the match, it started again. There was not any energy left.”

Bianca Andreescu, an 18-year-old Canadian who was seeded 22nd, pulled out before her match against 20-year-old American Sonia Kenin, citing an injured right shoulder that sidelined her from March until this week. Kenin will face the winner of Thursday’s match between Serena Williams and Japanese qualifier Kurumi Nara.

Bertens and Andreescu join two-time Wimbledon champion Petra Kvitova, who withdrew before her first match because of an arm injury, and former No. 1s Angelique Kerber and Caroline Wozniacki, who both lost in the first round.