Retired Air Force Master Sergeant Dan DeWent will be competing in his first Port Huron to Mackinac race this weekend. 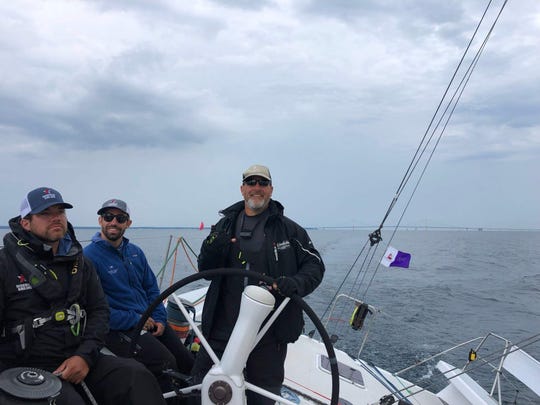 Detroit — This sailing stuff, it really does remind Dan DeWent of his career as a retired master sergeant with the U.S. Air Force.

So many similarities. Really.

“We’re used to bad food, bad conditions, cramped conditions, so it’s really helped (prepare) us to when we get on the boats,” DeWent said with a wide smile, talking about his transformation from the military to sailing on Warrior 53 in Saturday’s Port Huron to Mackinac race.

“It’s second nature. We’re not being shot at and not getting blown up, so it’s pretty easy.”

DeWent, who lives in Grand Rapids, will be competing in his first Port Huron to Mackinac race. He’s sailed the last two Chicago to Mackinac races, including last weekend, where Warrior 53 finished sixth in its 15-team division.

Warrior Sailing began in 2013 to provide maritime education and outreach for wounded, ill and injured service members and veterans. The program uses sailing to positively impact a participant’s physical and mental health, while reconnecting them with the teamwork they had in the military.

Ben Poucher, a Kalamazoo native who started as the program’s first basic training coach and is now the program director, runs 25 sailing camps for veterans throughout the country.

Close to 300 veterans have completed the Warrior Sailing program, and the interest is continuing to grow.

In the process of discovering sailing, DeWent has fallen in love with the sport.

DeWent was in the Air Force for 26 years, the last seven in a special operations division involved in air strikes.

There were dark days when DeWent left the Air Force. He had post-traumatic stress disorder (PTSD) and depression, which led to therapy for many years.

Finding sailing, for DeWent, was a salvation on so many levels.

Dan DeWent, right, said being on the water helps with his PTSD and anxiety issues. (Photo: Courtesy of Dan DeWent)

“After you get out of the military, you get lost in life,” DeWent said. “Everyone knows about the 22 vets that commit suicide every day — and I was almost one of them.

“That’s when I was introduced to Warrior Sailing and it’s really given me a purpose to live again.”

What appeals to DeWent is the camaraderie and closeness of the sailing team and the entire program.

“It’s almost our own community,” DeWent said. “It’s a bunch of vets and we’ve been through it. We’re all together and we’re going to continue to get through it and pick each other up and help one another. And then on top of that, we’re surrounded with these amazing world-renowned sailing coaches that have won every race known to man and to see them and what they offer and give to us, it’s just incredible.

“I’ll never be able to give back to this organization what they’ve given me.”

There’s also the calmness and serenity of the sport that DeWent, now a boat owner himself, was longing for so many years.

“For me, being on or near the water with some of my PTSD and anxiety issues, I can’t explain it but they just go away,” said DeWent, talking about his time on a boat. “Everything in my head is right when I’m on the water and when I’m sailing.

“I can’t do it alone. I have to have folks with me and we have to work together — and they can’t do it without me. It’s much like being back in the military, a team concept, and just working together.

The nine-person crew aboard Warrior 53 is going to have a stern test in the Port Huron race, generally regarded as one of the most challenging and tactical sailing events in North America.

“We all want to win but it’s more about the healing and team work and learning skills of sailing,” DeWent said. “(But) we’re all Type A personalities, so if there’s two boats on the water you can bet we’re racing."

Where: Lake Huron, just north of the Blue Water Bridge in Port Huron

Did you know? Over 200 boats are expected to compete with more than 2,500 sailors participating